Full disclosure, big spoilers up ahead!

Silver Surfer is sure to bring big changes! 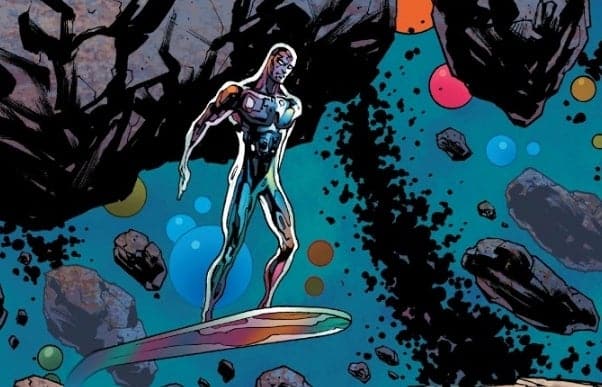 If you’ve been keeping up with Silver Surfer: Black, you’ll know Norrin Radd has been through a bit of hell of late. Thanks to being sucked through a black hole, the iconic cosmic character was now transported to the beginning of time, where he had to battle the vicious and heinous Knull and find his way back to his own timeline. That he did and the character’s Annihilation – Scourge one-shot apparently picks up right after the events of his acclaimed short-series.

When we see the Surfer, we find out after he was remade after technically dying in the Silver Surfer: Black, his physical form has now eventually turned intangible — think a ghost of sorts. One revelation leads to another and eventually, the character now decides to venture through a rip between dimensions, something that leads smack dab into a razed Negative Zone.

He battles the Revengers — the Cancerverse’s version of the Avengers — and is able to escape capture when he bumps into a quite  familiar face: Robert Reynolds. The problem is, Reynolds seemingly no longer has the powers of The Sentry — which is likely a good thing, since the Sentry has been the one wreaking havoc across the Negative Zone.

In epic fashion, a powerless Reynolds and an intangible Surfer merge their bodies together, creating a Silver Sentry hybrid that looks just as gnarly as it sounds. The moment had happened on the last page, so there’s no telling what happens next. You’ll have to pick up Annihilation – Scourge: Omega #1 to find out.

The solicitation for Annihilation – Scourge: Omega — due out December 18th — can be found below.