Doctor Doom is among Marvel’s most persistent villains who have appeared against multiple superhero characters. He has appeared in almost sixty years of many Marvel comic series. Many heroes have tried to end Doom’s menace by putting him to death.  However, every time, he pulls off a brilliant escape. Often, he seeks the aid of his duplicate Doombots to cheat death. Here, we will look into ten mind-boggling times Doctor Doom tricked death.

Doctor Doom made his debut in the Marvel comic world as a supervillain against the Fantastic Four. Namor the Submariner was the initially chosen antagonist for the Fantastic Four. Doom partnered with Namor in Issue 6 to fight the heroes. He betrayed Namor with intentions to rule the Earth. However, his ejection into space, bound to an asteroid, is not his demise. 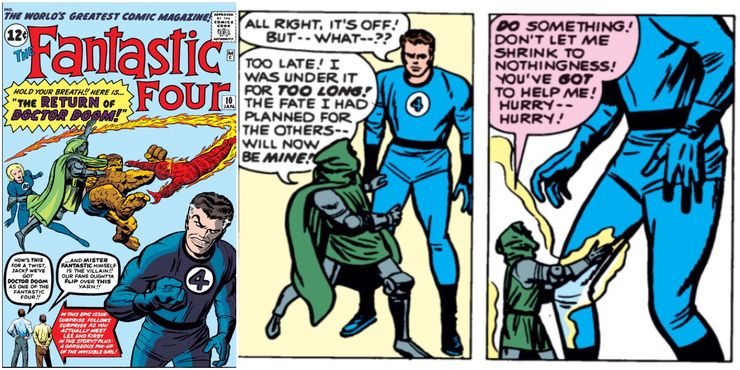 The Ovoids rescued Doom from the space asteroid. They taught him the famed body-swapping technique, which he used to switch bodies with Mr. Fantastic. The other three of the Fantastic Four attacked Richards. During the end, the swap was undone, and a shrinking ray shot Doom. The following issue, however, gave proof of his living.

The comic issue featured Ant-Man and his shrinking abilities. Doctor Doom trapped The Four in the Microverse. He himself then arrived to rule over the Micro-World. Subsequently, the Doctor was defeated by Reed Richards at the end of the comics and thrown off an airship. Doom tricked death again, growing back to his usual self.

4. Marked for Destruction by Doom (The Amazing Spiderman: Issue#5) 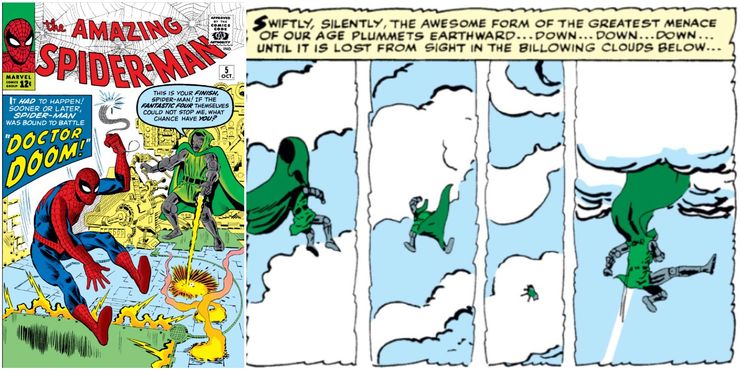 Doom’s first detour from the Fantastic Four franchise was in The Amazing Spiderman comics. Jameson regularly colors Spiderman as a notorious miscreant in the Daily Bugle. Doom extends a hand of friendship towards Spidey to team up against the Fantastic Four. Spiderman refuses and fights him. As a result, the Doctor falls off a high building. However, Doom tricked death successfully by turning on the jet boosters in his armor. 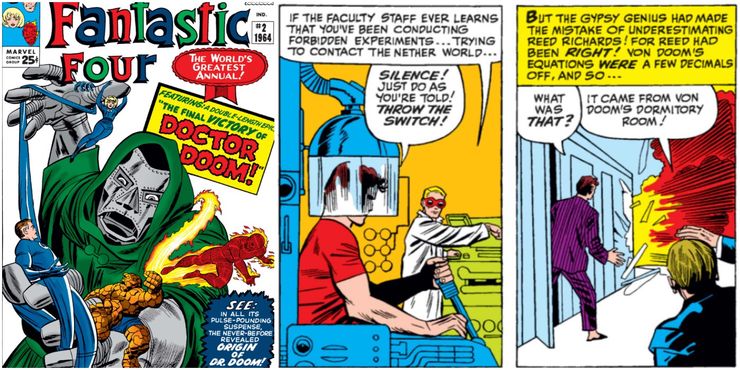 This issue is quite remarkable as it builds up Doctor Doom’s character story. The initial part takes the readers back to his college days. He survived a lab-accident that scarred his face forever. The latter component, however, continued the usual storyline. Richards exiled Doom into the cosmos, where Pharaoh Rama-Tut, aka Kang the Conqueror, saved him. They discussed their possible bloodline. 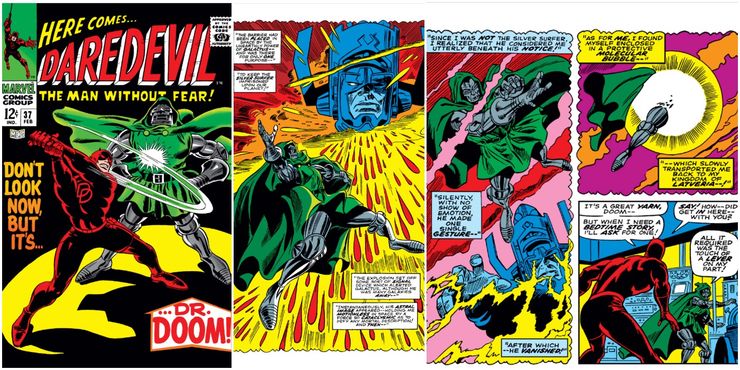 Doctor Doom stole Silver Surfer’s powers and started running from the Fantastic Four. After a long chase and the death of multiple Doombots, Mr. Fantastic threw him into a Galactus barrier-trap. Still, Doom tricked death by teleporting into Latveria, escaping Galactus . 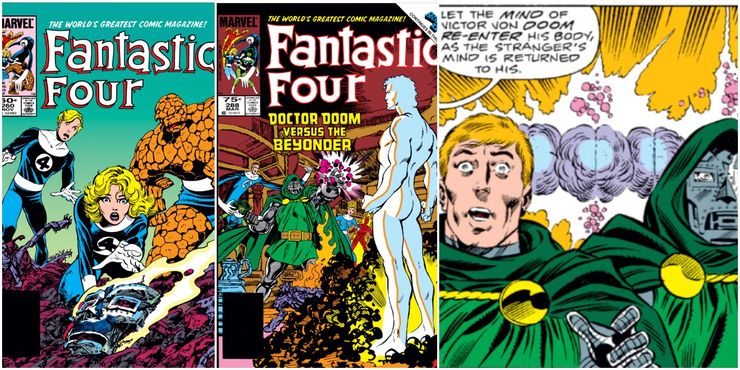 After his encounter with Galactus, Doctor Doom wanted a share of his powers. He recruited Terrax of the Devourer of Worlds to gather information. Terrax turned out to be a back-stabber and seemingly destroyed him. The following series, ‘Secret Wars,’ featured the Doctor as a villain. He had used the Ovoid body-swapping technique and mentally entered Norm MacArthur’s body. ‘Secret Wars’ villain the Beyonder extracted Doom’s mind and put him in a duplicate body. Then, he was sent back in time to fight in the war. 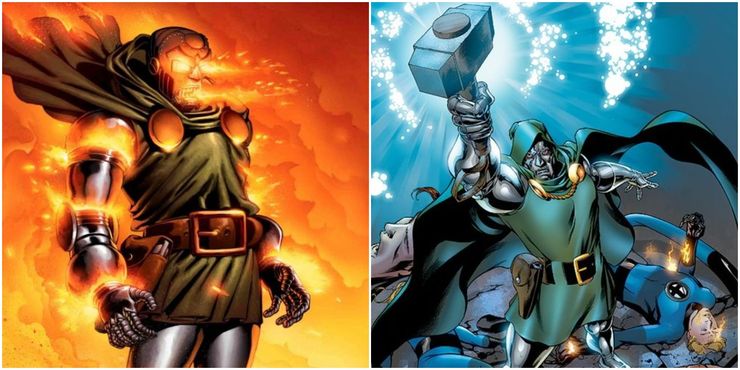 Doom had previously negotiated with a demon to enhance his magical powers. He failed to hold up his part of the deal and was cast into hell. The Doctor had a primary resurrection as an incorporeal spirit. However, he finally returned when Thor‘s hammer, Mjolnir, created an interdimensional rift in a parallel comic series. He tried to steal the hammer but failed. 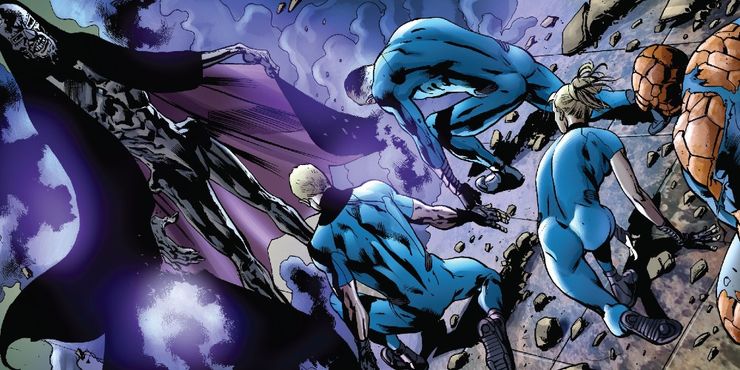 The comic revealed Doctor Doom’s mentor to be the Marquis of Death, Clyde Wyncham. The Marquis was disgusted by Doom’s failure to defeat the Fantastic Four. He cast him back to primordial Earth through time. Doom restarted his training beside a new apprentice. However, he later discovered the other apprentice to be his parallel self, buffed up by black magic and hatred. A massive battle followed, and Doom tricked death yet again. He killed Wyncham and re-established his persona of ‘serving no master.’ 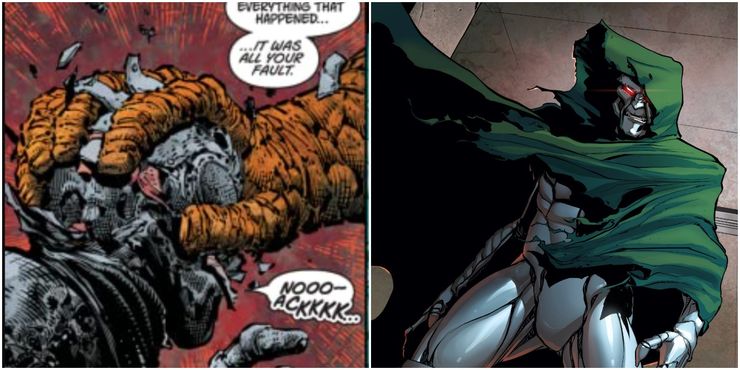 Victor van Damme’s Doctor Doom is in no way equal to the original Doom in power or stature. Yet, he had the Scarlett Witch killed. Subsequently, her father Magneto drowns New York using Mjolnir. The Thing breaks his neck, but it is the impostor Mary Storm. Van Damme escaped death since the Future Foundation trapped him in the Marvel Zombies universe. He returns in the following ‘Ultimate Spiderman‘ comic issue.

Doctor Doom’s persistence and power combined with a sharp intellect have earned him the title of a worthy adversary to Marvel heroes. There have been multiple more times when Doctor Doom tricked death. Can you think of any more persistent villains who kept coming back against your favorite heroes? Let us know in the comments.