Marvel fans were in queues at the theaters to witness what will happen next in Thor’s next adventure in Thor: Love and Thunder, which introduces an incredibly powerful weapon known as Necrosword. Gorr the God Butcher found the weapon, that is popularly known as All-Black the Necrosword, the origins of which take us back to the universe’s beginning. The deadly weapon was created by none other than Knull, the god of the symbiotes.

It was proved that Thor‘s hammer is a match to the All-Black when he took on Gorr. The God of Thunder was initially surprised by the Gorr’s power that he got from All-Black. This forced him to then team up together. Thor teamed up with two of the strongest versions of Thor from the future and also the past to stop the devilish Gorr’s plans to kill all gods from the entire universe.

Thor used two versions of Mjolnir which tend to absorb Gorr’s deadly Godbomb. Taking the battle with Gorr, Mjolnir is also a powerful Marvel artifact that is made by Godbomb’s energy and powered by the prayers of the universal gods. Thor succeeded in using the enhanced power of the two Mjolnirs to kill Gorr the God Butcher.

Similar to The Ancient One, a powerful sorcerer named Watoomb ascended to yet another level as a magical principality of the whole Marvel universe. The Wand Of Watoomb was created via a powerful weapon that went on to become arguably one of the most powerful artifacts in the entire Marvel Universe. The Wand of Watoomb was able to channel, store, and manipulate mystical energy in many forms.

It can be used both in defense or offense and even to create focused spells, magical spells, and defensive shields. It is an almost-omnipotent weapon and if it goes into the wrong hand, one can wreak havoc on the whole planet. The living symbiote of All-Black isn’t especially vulnerable to magic, but the Wand of Wattomb could still give it a run for its money.

This is an extremely powerful weapon called Odinsword which was revealed by Odin himself during the event of Fear Itself. A sword that was imbued with his own power to be one of the most powerful Asgardian weapons ever.

The Odinsword can channel both the lifeforce of whoever holds it and the Odinforce to further increase its attacks. Earlier, Odin named his sword Ragnarok, which means the End of All Things. The sword was so powerful that it was capable of ending the universe if used improperly. 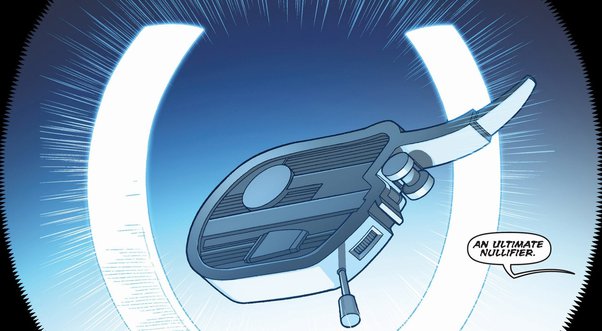 Galactus is among the most powerful cosmic being in the Marvel Universe, also known as the World Devourer. However, even the majestically strong and powerful weren’t immune to All-Black the Necrosword. In the far far future, Galactus got extremely corrupted by All-Black which went on to become the Battle of the Universe, aka Butcher of Worlds. Obviously, even that very powerful variant of Galactus still fears the Ultimate Nullifier.

While many Marvel still has some raging questions about the Ultimate Nullifier. However, it’s known that he has the ability to destroy complete realities well. even the multiverse isn’t safe from him. Fantastic 4’s Reed Richards went on to threaten Galactus with a powerful weapon, which had once saved the Earth from the hunger of Galactus. All-Black can manage many powerful feats, but it won’t be able to handle the destructive power of the Ultimate Nullifier.

During the King in Black event, Knull reformed the All-Black the Necrosword. Leading the attack, Knull went straight for Earth with his army of symbiotes, carving through other cosmic beings just so that he can cover the entire planet with darkness.

Venom then joined other characters like Captain Universe who was chosen by the Enigma Force. He went on to become the avatar of God of Light, which gave him the allowance to make a powerful new weapon. What Venom did was, merge Thor’s hammer Mjolnir and the surfboard of Silver Surfer together and created a cosmic battle ax. With this, Venom overpowered both All-Black the Necro Sword and Knull with his cosmic battle ax, hence proving that light has power over darkness.