Marvel Outlawed #1 is out now. It has brought together it some exciting and disheartening news. The Marvel’s Teen heroes have been targeted by a life-threatening incident that might lead to harming themselves. In the wake of this incident, the US government has passed a law. The law states that no superhero is under the age of 21 can perform any superhero activity.

The war that took place earlier in Marvel!

The law was initially termed to be the Underage Superhuman Welfare Act; However, it has later been changed to Outlawed #1. The US government has earlier, too, started acts that work in favor of the welfare of society. Before the law mentioned above, it also came up with the Superhuman Registration Act, which stated that all the superheroes are required to get themselves registered with the government.

The actual culprit behind the new law

Failure to register themselves will make them criminals in the eyes of the public. The earlier act gave rise to the Civil War MCU. The new law that has been passed is a response to the Coles Disaster. The Coles Disaster has started by the attack on Coles Academic High School. Roxxon Oil Company was the one who was responsible for sending death threats to Ailana Kabua.

The savior during tough times!!

The Roxxon company forwarded their dragon to kill Kabua. In an attempt to kill the dragon, the superheroes created devastation and have put several lives in danger. Viv Vision, on the other hand, is seen to be adding fuel to the fire.
Moreover, Kamala, aka Ms. Marvel, has been accidentally hurt in this entire incident. This has made the government pass the law; however, the government is not aware that Kamala is Ms. Marvel. However, how the superheroes will react to the situation only time will tell.

The video highlights how Marvel Outlawed #1 is breaking stereotypes! 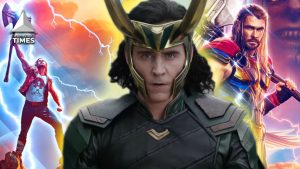 God of Mischief, For A Reason – Love and Thunder Proved The Thor Franchise Cannot Survive Without Loki