Hawkeye portrayed in Marvel’s What If…? and made him much stronger than he ever was in the Marvel Cinematic Universe.
In the episode 8, Ultron with the help of Infinity Stones is trying to destroy the MCU after wiping out his own universe. When he discovers the Watcher can access to other universe and can fight the character across space and time, the Watcher turns into evil version of Doctor Strange.

Even though Ultron destroys most of the universe, Black Widow and Hawkeye survive a nuclear attack on Earth and plan to take him down. Both of them do not have superpowers and thus seem to be outmatched. However, Marvel makes Hawkeye much more powerful to make sure they are even on the stakes.

During the episode, Hawkeye is fighting Ultron’s drones using his robotic metal arm, his brand new arrows and even an INVISIBILITY CLOAK !!!!
All these make him more powerful than he was in the MCU.

There is huge difference between the Hawkeye in What If…? and the one in the live action films. As of now, in the MCU, Hawkeye has always been the who is the odd one out of the Avengers.
Most of the other heroes have specific powers or have certain assassin training like Natasha Romanoff, but on the other hand, Hawkeye’s abilities just consist of erm.. shooting arrows accurately. 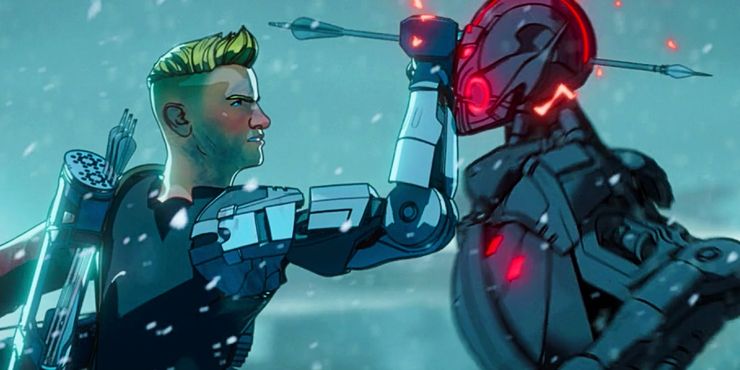 He had himself acknowledged his limitations in Avengers: Age of Ultron.
However, the episode of What If…? changed 8 things! He got more powerful arrows; which can emit forcefields, he got a device that can cloak his whereabouts; he has a new mechanical arm which makes him more enhanced.
And in terms of his physical abilities, he’s a much stronger asset for the Avengers.

This version of Hawkeye is certainly stronger compared to his main MCU version, but that doesn’t mean he is better. Clint Barton’s humanity is what makes him heroic. Even though What If…? has a more powerful Hawkeye, but his version in the MCU’s main timeline is heroic as well.