Crystal Dynamics, the developers of Marvel’s Avengers, confirmed that Crossbones is going to play the role of a secondary villain in the War for Wakanda. 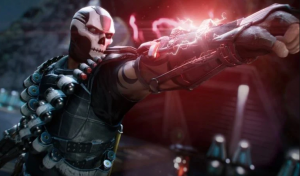 Klaw is not the only one who will play the villain in Black Panther. Instead, the makers have to reinvent with Marvel’s Avengers forthcoming War for Wakanda expansion.

As far as the history of Black Panther’s greatest enemies is concerned, Klaw (Ulysses Klaue) will serve as the main antagonist. However, it is also very well known that the Avengers expansion will also get its villain on screen. With that said, Crystal Dynamics has confirmed that the secondary antagonist will be played by Brock Rumlow, aka Crossbones.

“I think what’s really fun about the sheer amount of Marvel villains on our roster is we get to really dig into what would be the most interesting twist and turn from what we’ve done previously. Crossbones has some of the most iconic comic dialogue ever because he just enjoys himself so much, but he’s also got some interesting tricks up his sleeve, There’s always a lot of discussion of who we think our villains should be. Klaue doesn’t really get his hands dirty in the same way as other villains might, so we needed him to have a character who would have no problem with that.”

Created by Kieron Dwyer and Mark Gruenwald, the character of Crossbones first appeared in Captain America (1989). The character also made a cameo appearance in the previous part. This villain is best known for his role in Captain America’s (Steve Rogers) death, which happened after the original Civil War event in 2007.

While Crossbones died in Civil War, the role is perhaps going to be reprised again by Grillo. He made his Marvel Cinematic Universe debut in 2019’s Avengers: Endgame as a prominent part of the time-travel sequence. Grillo has also voiced the character in Marvel Studio’s animated series What If…?. The first-ever MCU animated series is now streaming on Disney+.

Published by Square Enix and developed by Crystal Dynamics, Marvel’s Avengers is now available on PC, Xbox Series X/S, Xbox One, PlayStation, Google Stadia, PlayStation 4, and PlayStation 5. At last, the War for Wakanda expansion is launching on August 17.