Avengers 4 is going to be huge, as it will mark an end to the phase 3 of the Marvel Cinematic Universe. But the future looks bright for Marvel, as the studio is looking forward to introducing a wide lineup of film franchises and characters, especially since Disney has acquired Fox’s assets and Sony is still working hard to enter the game.

Many Marvel fans have been speculating the future of Marvel and one similar fan has mapped down the next whole decade of MCU films and shared it over Reddit. 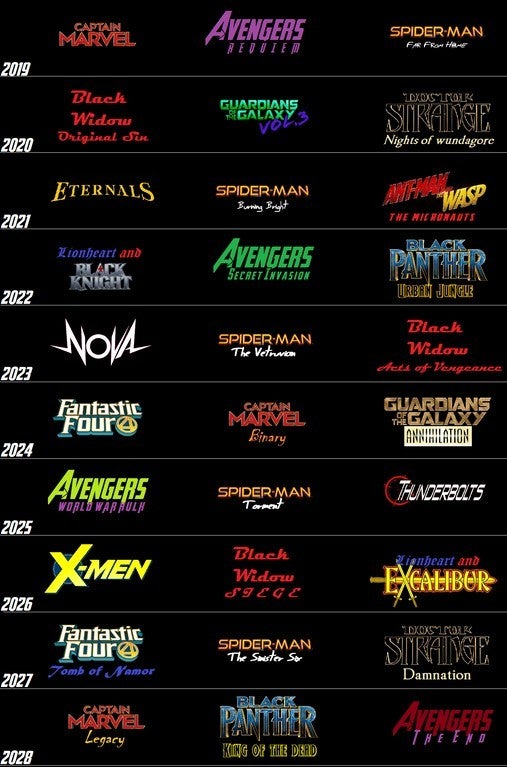 Many films here are either inspired or just an example of wishful thinking. The user has titled Avengers 4 as “Requiem” which seems more like a personal desire than anything else. Moreover, no one really wants to see a ‘Lionheart and Black Knight’ film while the projection of Black Panther films with ‘King of the dead’ and ‘Urban Jungle’ storylines sounds exciting. The Spider-Man titles sound horrible until you get to see Sinister Six.

Fantastic Four serving as a backdoor to bring in Namor sounds great and Secret Invasion and World War Hulk are some really enticing stortoes. The Black Widow and Doctor Strange franchise plan sound a bit off, however, the introduction of new franchises like Thunderbolts, Eternals and Nova are spot-on!

This chart, till some extent, may determine the expansion that Marvel will have to undergo for the upcoming phase 4 and beyond. All in all, this is probably what MCU could look like in the next decade. (Leaving a few films, of course.)