An Asian Superhero Film has been over due since a long time now and recently it has been declared official. The first trailer for Shang-Chi and The Legend Of the Ten Rings was launched in April 2021 and the Twitter blew up crazy. Shang-Chi is quite popular among the Marvel Comic readers and he has been one of the longest comics running superhero.

The fans were obviously thrilled and excited seeing the promising trailer and that gave us many reactions on social medias. The fans didn’t take much time to compare the trailer to other MCU or Marvel related references. The movie has already started getting praises for the wonderful visualizations and action scenes shown in the trailer.
Few Marvel fans claim that Shang-Chi could be the next big thing in MCU

It Is Magically Different

it looks so different to anything else marvel have ever done. i’m in love #ShangChi pic.twitter.com/HHWdvc00pM

This twitter user has captured few of the perfect scenes from the trailer and pointed out that these things make Shang – Chi so different compared to anything else in MCU so far.
Everything about the trailer has been exciting, visually appealing as well. The images, the colors, the costumes all are one of a kind, strong and they have great contrasts too.
If the trailer has to give so much, the movie is going to be a visual treat!

Save Earth, Use Public Transport!

This user has hilariously pointed out a connection between Shang – Chi and Captain Marvel.
The trailer shows a fight scene in the bus. Now we surely remember Captain Marvel fighting her enemies on a subway train.
According to the meme, Shang – Chi and Carol Danvers are so committed to fighting crime on the public transportation, that they could be besties(or bus-ties?)
We are looking forward to seeing them together working with the Avengers.

What Is This Mind Blowing Choreography!!

the visuals & fight choreography in shang-chi: and the legend of the ten rings are already some of the best marvel has ever done.#shangchi pic.twitter.com/NSOZCa367G

MCU has always been well known for amazing fight scenes, but these fight choreographies in Shang-Chi are next level and maybe the best work of MCU according to the user.
The trailer promises sever fights in the movie including against the main villain Death Dealer

.
These are going to be something to look forward to for all the action lovers.

Reminder that #ShangChi will have references and Easter eggs that go all the way back to the beginning of Marvel. pic.twitter.com/xkTSkriAL2

This user has taken our undistributed attention by pointing at a very interesting detail that only a true MCU fan could remember. Apparently it looks like there are some Mandarin references to that one from Iron Man 3.

This scene is the real MVP of the movie. Apparently, the Death Dealer wasn’t really a part of Ten Rings in the comics and didn’t have much appearance after his introduction. But he plays a major role in the movie and the fans cannot wait for movie to hit the screens already!

OK BUT LOOK AT THIS SCENE?? WHATS GOING ON?? #ShangChi pic.twitter.com/tAP2CraeR6

This particular scene from the trailer aroused curiosity among many fans.
According to the Comics, Shang-Chi does not have any superpowers of his own. However, in this particular scene, when water erupts out at him, it mid air seems to freeze and Shang-Chi touches the same with his hands.
Fans are aiming at the possibility of him developing some powers in the MCU.

Asian Parents Are Hard To Please. 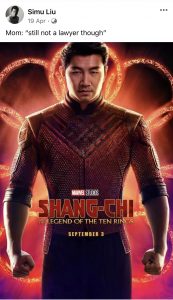 Simu Liu started his career as an extra on the Pacific Rim. He obviously has come a long way after that. He is now one of the biggest stars in the MCU with his role as Shang-Chi. It was not only a proud moment for him but his happiness grew no bounds when Marvel announced the teaser on his birthday as his birthday gift! This representation in form of movies also meant a lot for many Asians globally and everyone is thrilled and excited.
But Simu Liu’s concern is his mom. She is still not impressed as he is not a lawyer.
Well we can feel you too Simu but she will come around!