MCU’s Loki will debut on Disney+ in May 2021, and will consist of six episodes. It will be part of Phase Four of the MCU. Check out these hilarious Loki memes that will remind fans why they adore the God of mischief so much .

Loki voices his own logic and his unending desire to prove his worth is a huge hit among the fans. Loki is admired so much that he has bagged a show focusing entirely on him. Fans claim he’s not all evil and is much efficient than Thor.

However Loki has his own reasons to be a trickster and evil, take a look at these memes and you will agree too :-

Loki’s imprisonment by Pierce was a highlight, in this scene Thor had to face Alexander Pierce to take Loki back with him. This meme displays Loki’s sass filled expression toward Pierce, indicating he isn’t ready to answer someone from earth. Though Loki’s relationship with Odin is complicated yet he considers him, he looks like he’s in no mood to talk deals with Pierce.

Well, his sass filled expression does prove it. 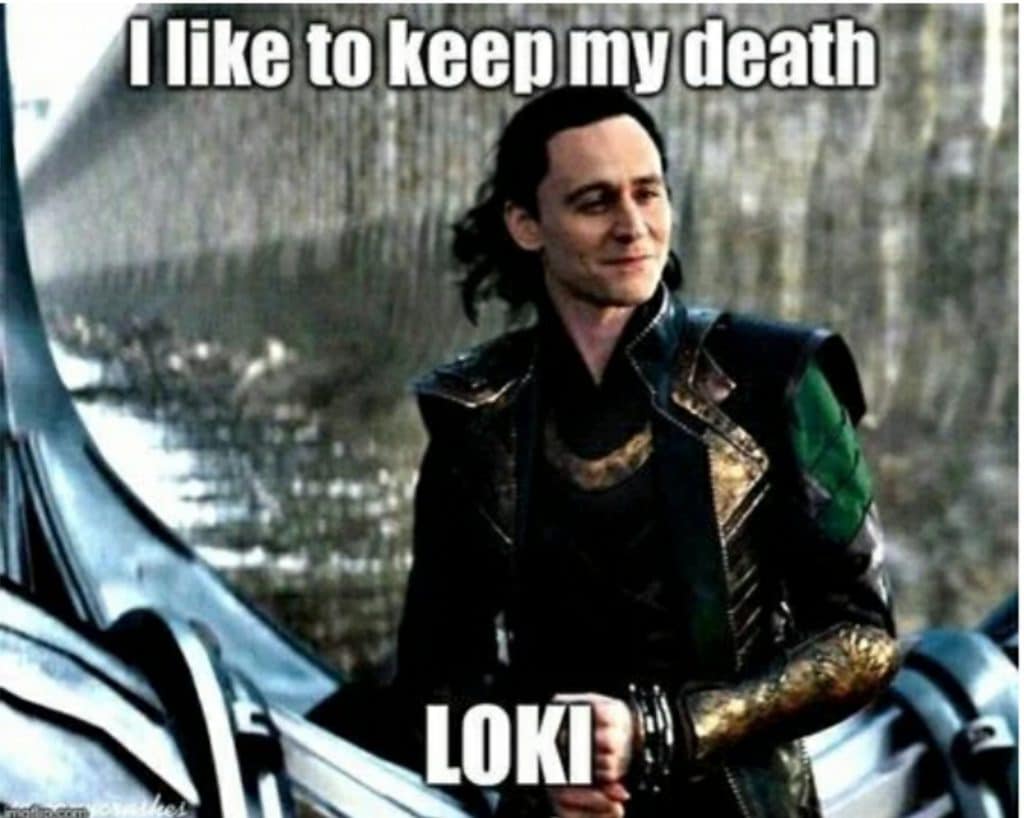 With just one look at this meme, ardent fans of Loki must have understood the pun intended here. Loki’s lowkey efforts of faking his death multiple times can’t go unnoticed.

Every time he dies at the climax, only to be revealed in the next movie that he just played dead all along. However, this meme does immense justice to Loki’s love for faking his death. 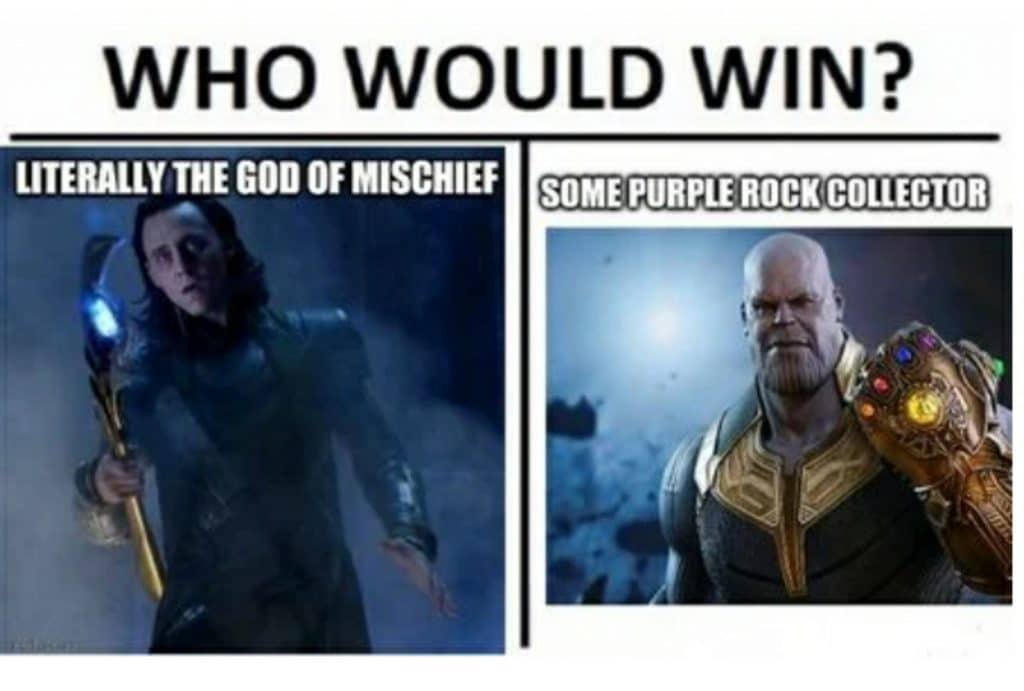 Loki fans are still displeased with the way he dies in Avengers: Infinity War. Titled God of mischief he died a lame death, this doesn’t seem fair.

Also, Thano’s wiping out half the earth’s populace shows the threat that could follow. Thano’s seemed much powerful while Loki got killed in a predictable way. 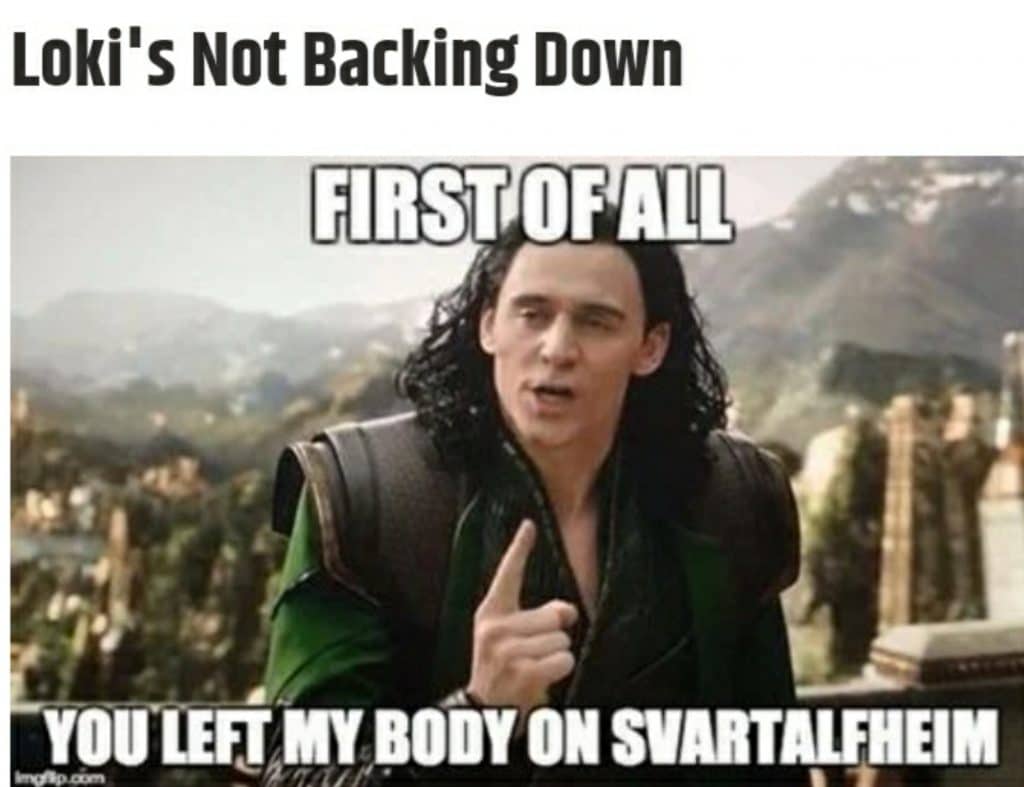 Loki’s anger is justified through this meme. In The Dark World Loki faked his death, instead of abandoning Loki’s supposed corpse, Thor should’ve arranged for a formal burial.

Considering how particular the Asgardians are regarding the ethnicities. Apparently, Loki is right in pointing out Thor for disobeying the traditions. 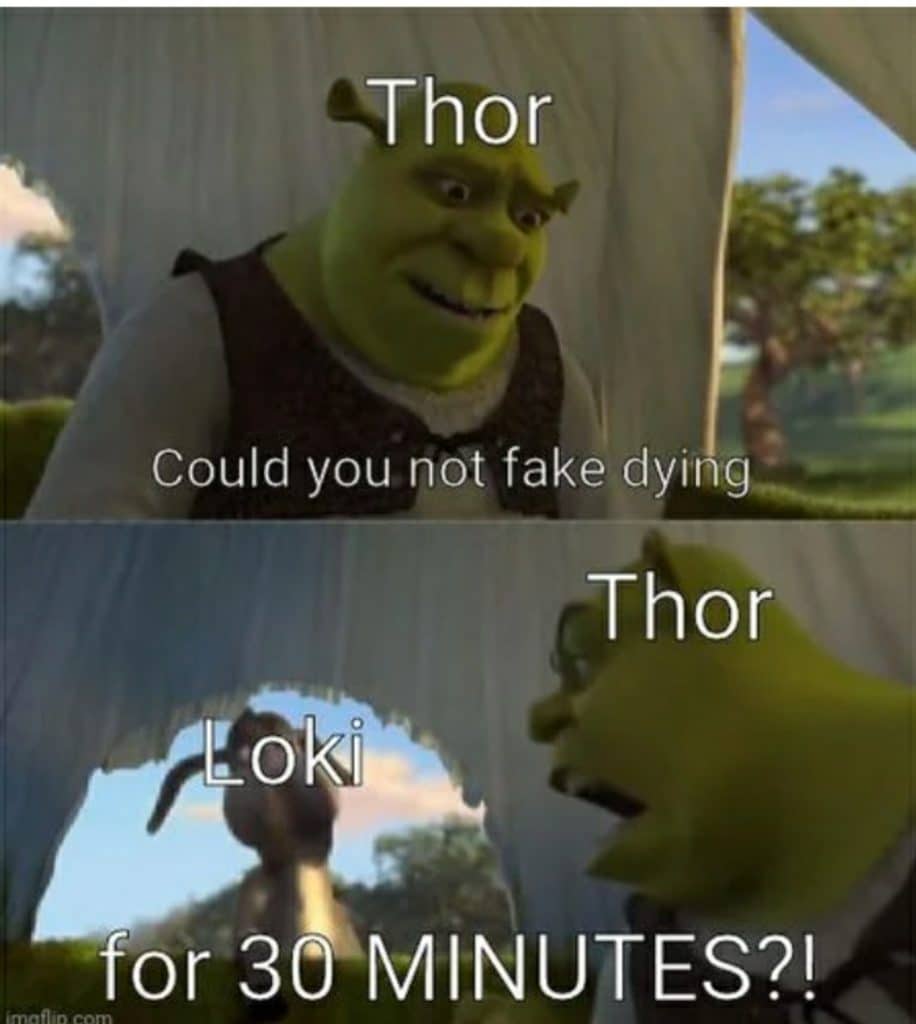 This meme cleverly states how the audience expected a thing and it didn’t happen in MCU. One of which is the part where Loki died and returned numerous times, audience knew he’d return yet again because they’ve gotten used to the trickster’s tricks.

As the meme suggests, Thor specifically would be infuriated by this, as he had to deal with Loki’s frequent deaths, only to realize Loki tricked him yet again each time. It’s likely that Thor has a reason to be annoyed. 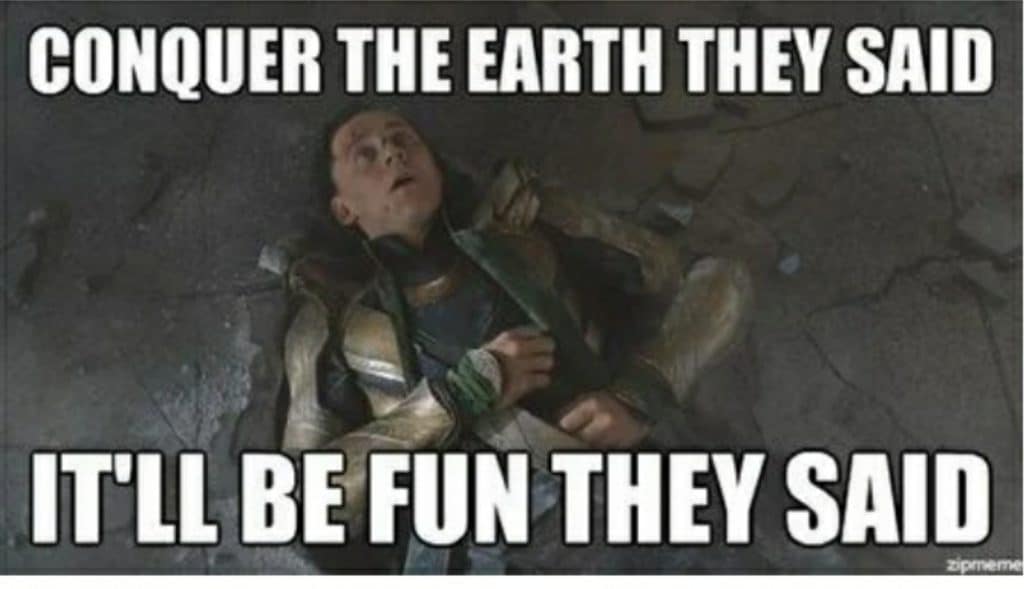 Loki is a favorite because he’s funny and evil, a deadly combination indeed. Whatever might Villains Phase Four in the MCU bring in, Loki will remain a heartthrob nonetheless. Well, this is what the meme here says.

Loki’s lack of judgement and faulty logic is also highlighted in this meme. When he influences Thano’s of inheriting earth and his decision leading to unexpected heroes interrupting his plans while he eventually is defeated by the Avengers on retaliation. 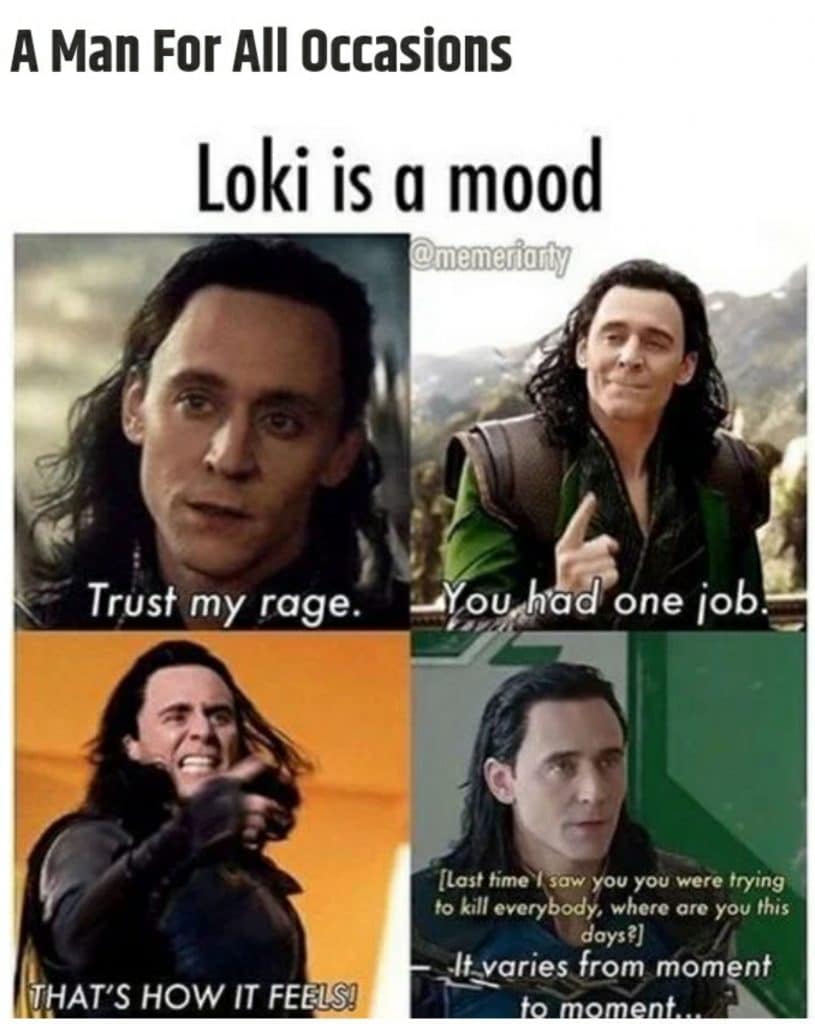 Loki’s ever-changing moods never go unnoticed and so does this meme display, Loki always has a mood for all events. His attitude was such that he believed he’s not to be blamed as he has a knack to adjust to any circumstance at hand.

None can seem to argue with Loki, given he’ll win it every time by using the victim card. Even Loki himself agrees with this meme I suppose. 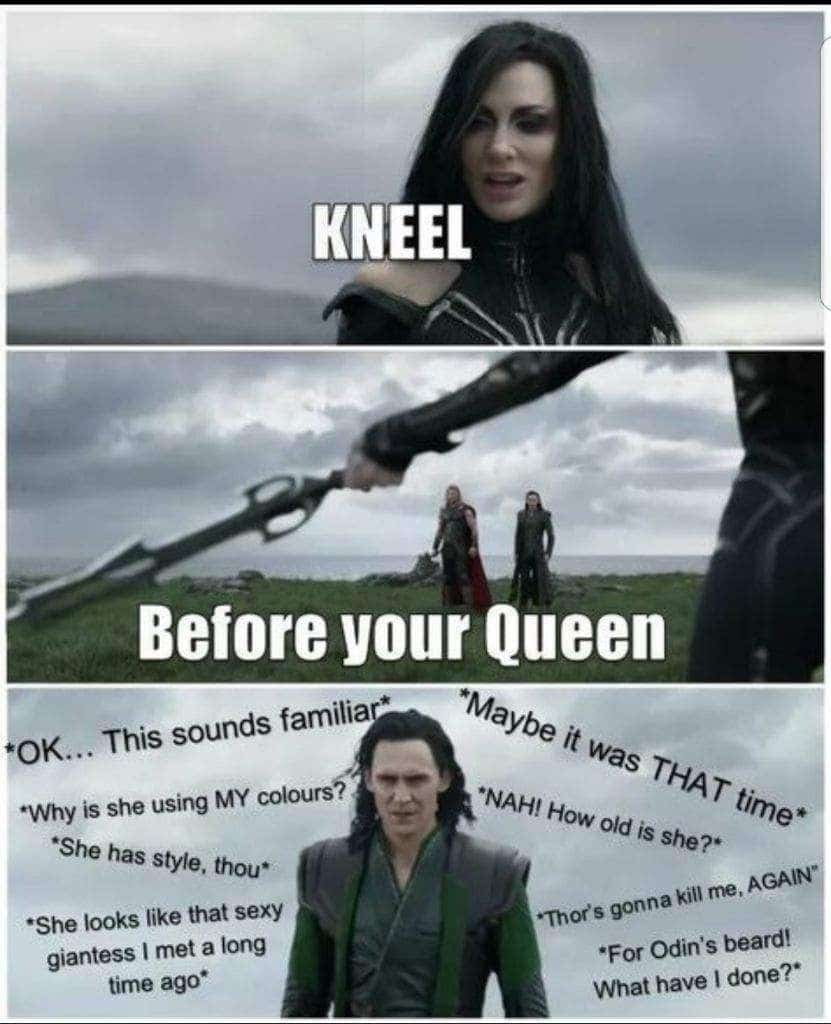 This meme dates back to the scene where Hela destroys the hammer, mostly the scene portrayed the shocking reaction of everyone present there, but this meme delves into Loki’s mind and what he must be wondering. Hela is said to be Loki’s daughter in the comics, guess the meme here is referring to it. Probably it also is throwing a shade on how upset Loki is with Hela copying his style. 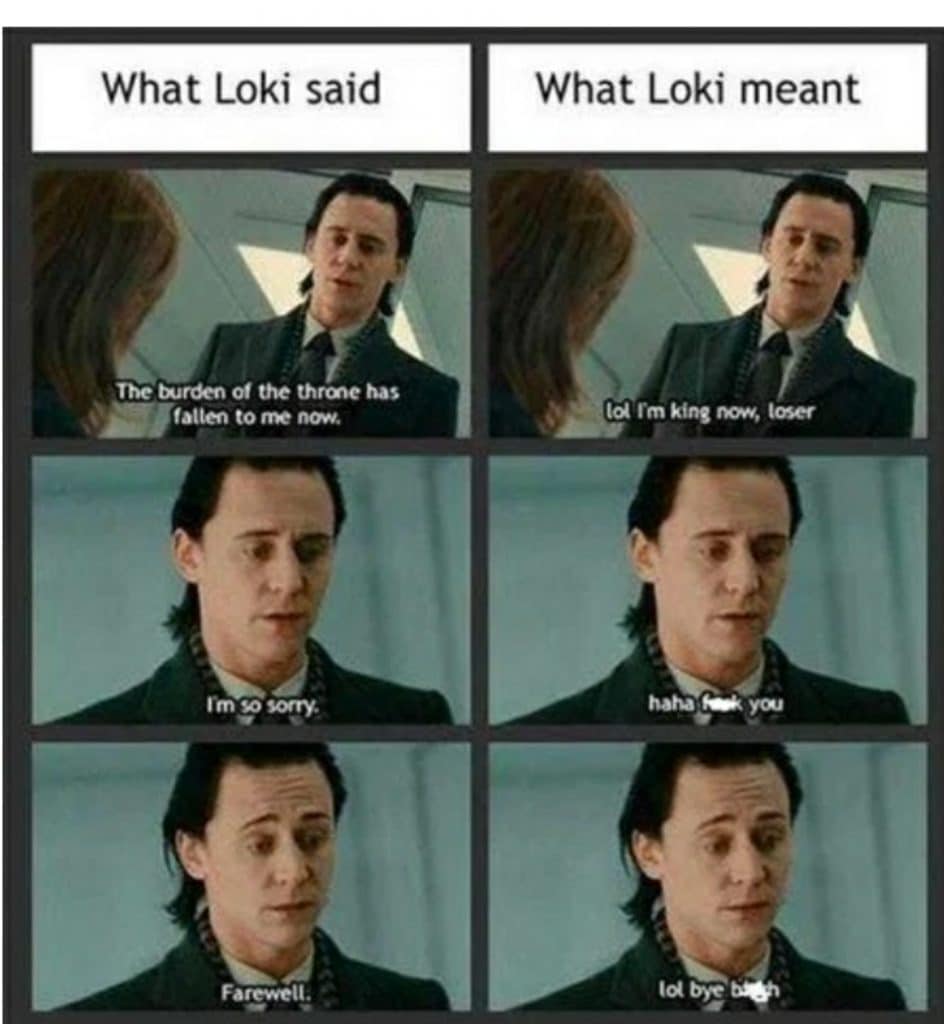 Back in the first Thor movie, most fans hadn’t caught on to Loki’s strategies. This meme serves as the connotation to his words, where it’s clear that Loki didn’t actually feel bad for Thor at all. His activities in Asgard certainly confirmed this.

The Loki in later movies would have definitely gone with the negotiation in the right-hand panels, as he was much more on the impish side. This image is also proof of how well Loki can have his way with people to get things done. He is an opportunist and there’s no doubt about it state the proud Loki fans. 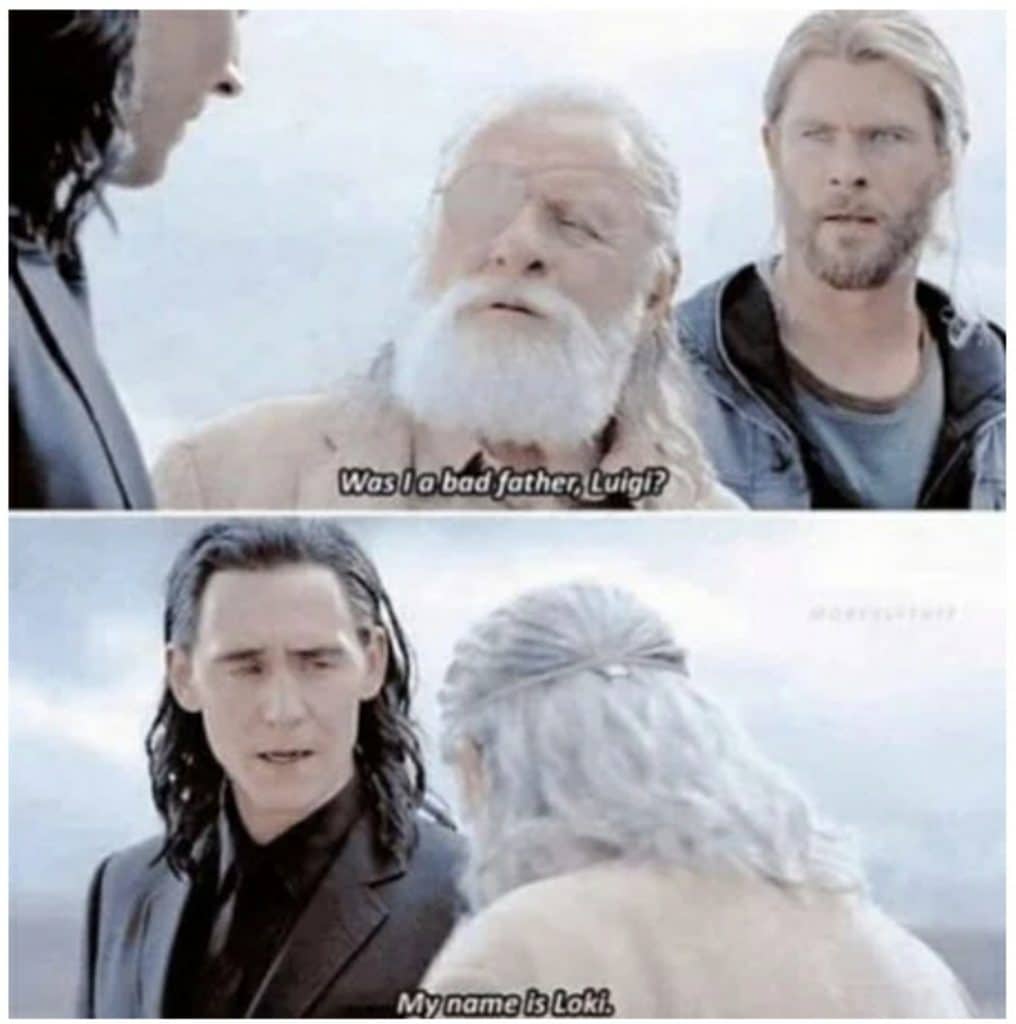 Take a look at this hilarious meme, fans agree that Odin wasn’t the best father to Loki.  Its funny how he always mispronounced his name, ignorance at its best. Apparently, Loki’s reasons for wreaking havoc might be fair enough. Being lied about his parentage for years and functioning under the constant shadow of Thor he is likely to be thinking this way, as the meme here suggests.

But again Odin wasn’t as detached as Loki thought him to be so this meme might be showing Loki’s way of viewing things. Well whatever it must be, can’t deny it’s funny and witty.