Marvel has given us a number of superheroes and super villains, with interesting stories and some great serious traits we all desire to have. But some marvel characters are way too expressive and funnier than we think. Sergeant James Buchanan “Bucky” Barnes is a World War II veteran and Steve Roger’s best friend since childhood. He may come across as a strict angry man at a first glance but the real fans know that he is one of the most funniest and memeable Marvel character in the MCU.

We saw more of his character and his hidden sense of humor in the new show The Falcon and the Winter Soldier. The show was about how these super heroes turn into terrorists. A very complicated and twisted show with a lot of unexpected plots. But we are here to make you feel better. Fans have created a lot of funny memes out of Bucky’s wicked sense of humor and we love it.

1. WHICH BUCKY ARE YOU TODAY?? 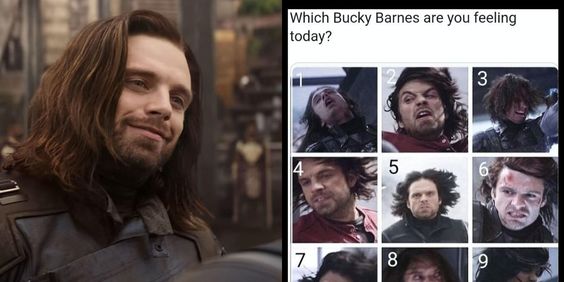 Bucky is known for his angry and grumpy looks, that we all know we can relate too. So fans have created a mood chart, a vast selection of Bucky’s precious expressions for you to choose from. Feeling sad that you can’t go outside or have fun with your friends? Or feeling angry at the amount homework you are getting at the school? Now you have a Bucky face to express all your moods. 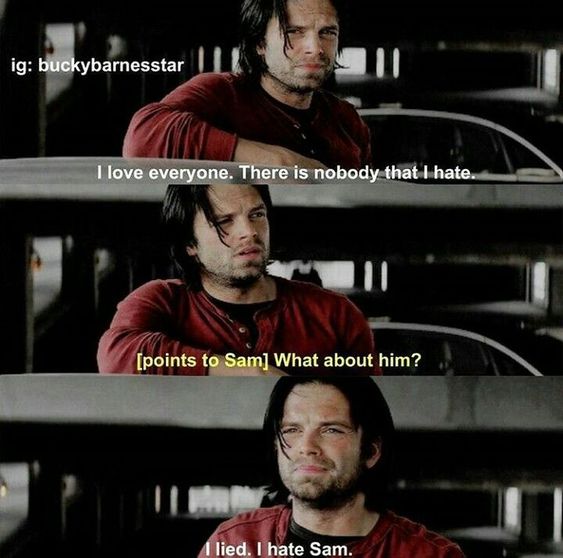 Before getting brainwashed by Hydra, Bucky used to be a good guy who liked everyone and doesn’t necessarily seems to hate anybody. But after his rough experiences, our hero became a little cruel and tough to break. Still he says he loves everyone and there’s nobody to hate (hard to believe, I know) but poor Sam is not on the list.

But the fans know that it is just Bucky being Bucky and he actually cares about Sam. This is just a way for him to show his friendship and maintaining the funny rivalry they have. 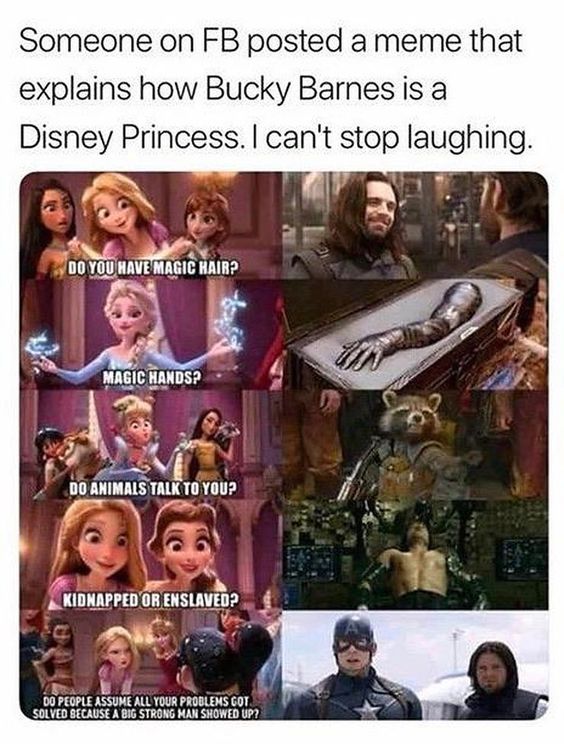 Bucky already have the hair of a Disney Princess, and if you compare thoroughly you’ll notice a lot of similarities between our hero Bucky and a Disney Princess for sure. We might see a movie from Disney in future, of our strong and cruel but super awesome princess Bucky. We all will pay to watch that (if you say no, you are lying). 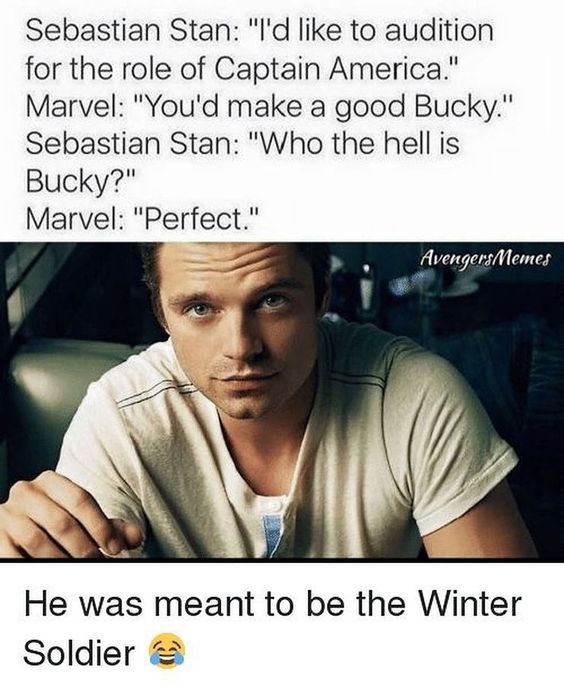 Sebastian Stan is a great actor and all know he got the skills to play a superhero. This meme is saying that he wanted to play as Captain America but the casting directors had a perfect role already figured out for him. And we are not complaining because Sebastian is the perfect man for the role. And even if Stan didn’t get the role he initially wanted, he got the role that suits him the best and we all love it.

5. NOT THAT TOUGH AFTERALL!! 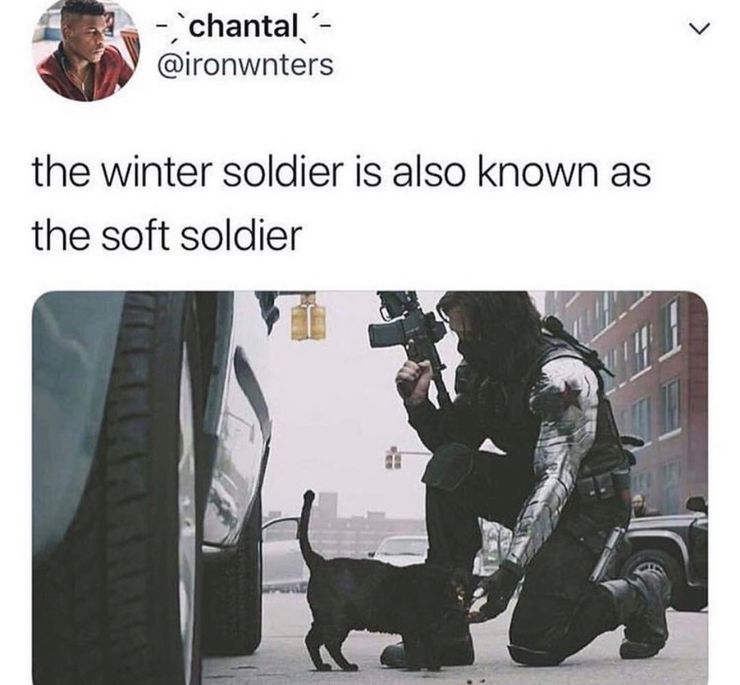 We all know that Bucky got a dark past, but it doesn’t mean he is not a nice person. Even though he is in a tough fight, he still got time to pet a cute cat (isn’t it heart melting). This meme shows that he can be nice to you if you deserve it. And we all want to be on his nice side, right? 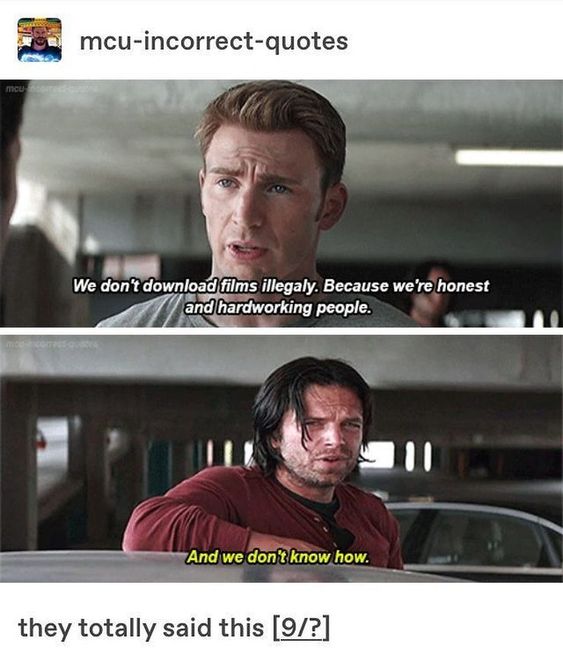 Steve and Bucky both are still learning how to live in the 21st century, and they still got a lot to learn. And on the list of things to learn there is also downloading movies illegally. Steve being the honest hard working man he is, he would never do such a filthy crime. But on the other hand, if given the option, Bucky would clearly download a movie but only if he knew how to. Poor Bucky! 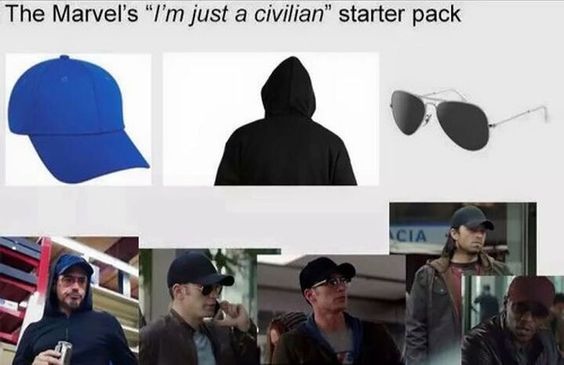 Marvel heroes knows how to hide. Whenever they have to hide their identities and act like a normal citizen, they got the perfect outfit for it. A hat and black sun glasses are a must. The blacker the clothes the better. A raise for the fashion designers for choosing the most basic and minimalistic clothes for our superheroes. 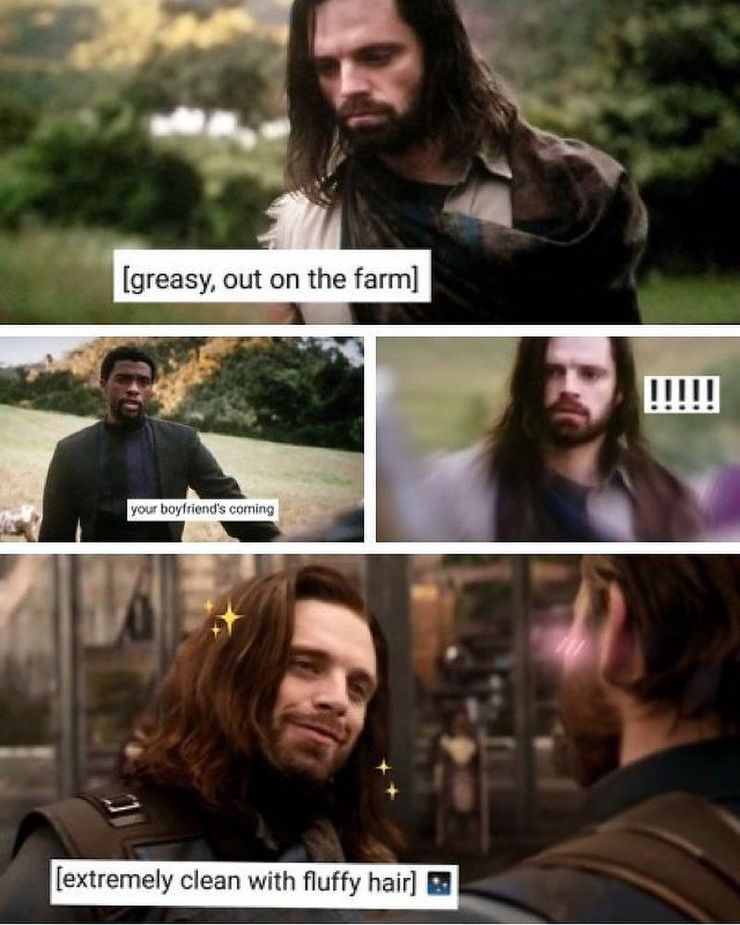 Fans have been shipping these two together for so long now. Fans believe that Steve and Bucky have something more than just friendship between them. In this meme, Bucky is all greasy and not presentable (we doubt that) but as soon as he got the news of Steve visiting, he cleaned himself up and also fixed his hair and made them super fluffy and pretty. And he did it so fast, now that’s a superpower I want. 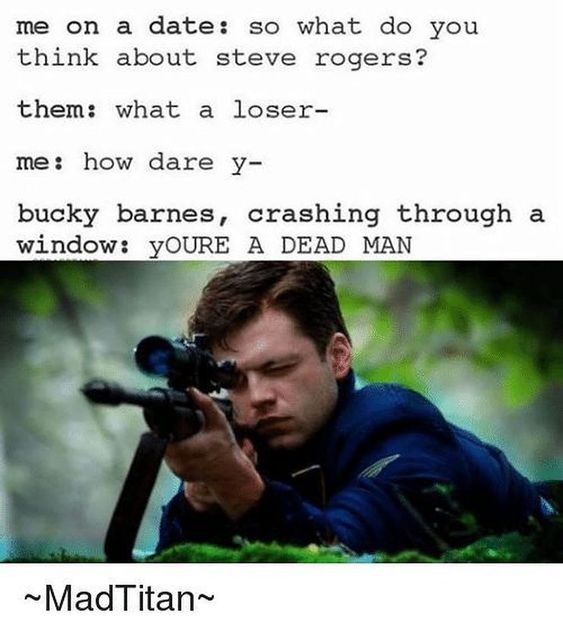 Bucky is a best friend we all want. He will do anything to protect his friend. Let’s not talk about that time when he tried to kill Steve, Bucky was brainwashed okay!! Give him a break. Except this situation, he has always been a good friend and has protected Steve Rogers a numerous times. In this meme also you can see that you cannot insult Bucky’s best pal Steve or you’ll be in great trouble. Think twice before you got anything bad to say about Captain America, Bucky might hear you!! 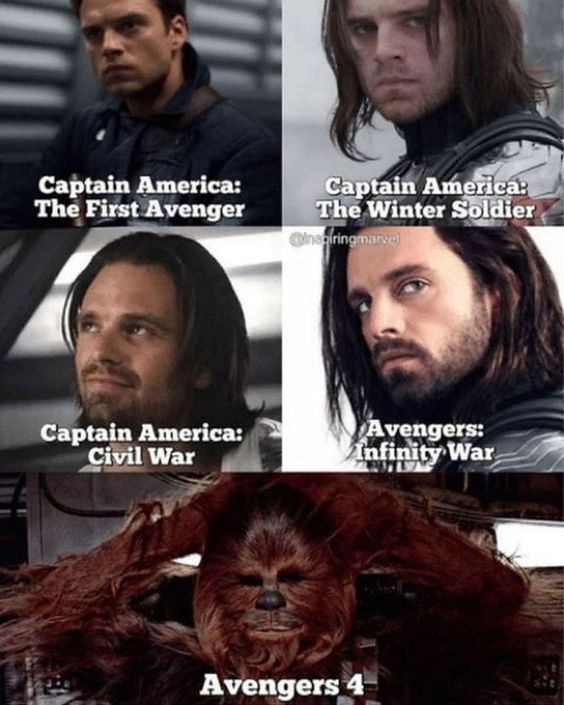 Being a superhero is not easy. Small things like getting a haircut is a big task if you are busy saving the world (or destroying). So Bucky’s hair for the most of the Marvel movies just grew long and long. And now the fans are making of it. They are making memes about Bucky’s hair length for the next film. The hair length is predicted to be as long as Chewbacca from Star Wars. But sadly, we didn’t get the Chewbacca Bucky because he trimmed his hair made them real short for the new TV show Falcon and the Winter Soldier. Bucky is looking great with his new haircut but all know that he can pull off long hair as well.

Now we know that Bucky is not just an angry dude with some good hair but his underrated funny side is also something we all enjoy alongside his great character. These memes were hilarious and fun to write about. Tell us in the comments what you think about them!