Mephisto has been making big moves in the Marvel Universe as of late. He’s been seen manipulating the Avengers after resurrecting Phil Coulson to run the Squadron Supreme, as well as brokering a deal with Miles Morales to bring his dead friends back to life in Champions. Throw in the demon acquiring Deadpool’s heart, and it seems like he’s angling at some nefarious endgame. In Doctor Strange #17, Mephisto takes it a step further when he claims a piece of the Sorcerer Supreme’s very soul.

Mephisto claims a piece of the Sorcerer Supreme’s soul

Strange sought Mephisto’s help to stop Galactus after the villain became corrupted by magic and began consuming everything, including Dormammu. This was set into play by Mephisto, ironically, leading to Strange seeking Umar and Clea (his ex-wife) in the devil’s lair. For their freedom, the Avenger promised him something in return — a pact Clea warned Strange against, but he was desperate and had to make it.

This latest issue deals with the fallout of Strange saving them and assembling a huge legion to take the devourer down, all a sinister set up by Strange so Galactus could eat them and overload himself on energy. Strange then tried to use his own Eldritch energies in the form of a mace to shatter Galactus and restore everyone he consumed, but this broke reality, which has led to Strange trying to repair it after arriving in the presence of Eternity and the Living Tribunal. They grant him godlike power, but it’s actually all due to Mephis to, who took Strange away right at the moment Galactus imploded. 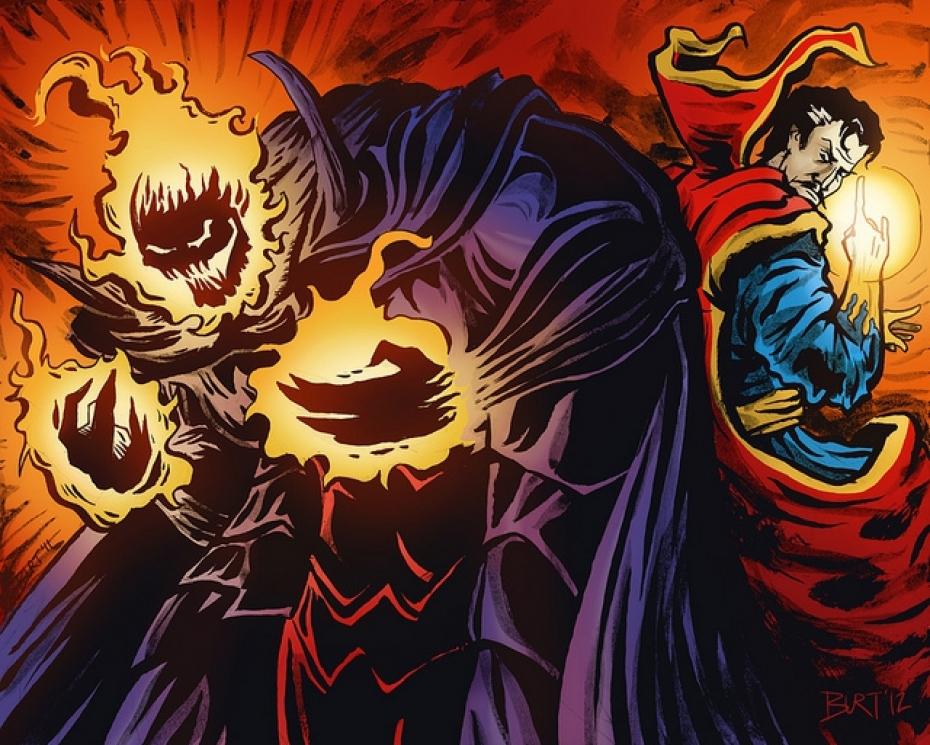 He saved Strange, although chiding him for destroying reality, as this meant there’d be no more souls to harvest. However, Mephisto figured out a meeting with these cosmic powerhouses could stitch together the fabric of existence and this is why he sent Strange to them, with the doctor the only one person capable of performing this surgery of creation. When it’s all done, though, Mephisto hauls Strange back, only for the Sorcerer Supreme to argue he paid off the debt.

Mephisto retorts by indicating he pointed him in the direction of the Tribunal, he never asked Strange for anything, leading to a loophole which means the debt is still owed. The Avenger balks at the price, as he doesn’t want to trade a shard of his soul, but Mephisto makes it clear he’ll take it by force if necessary. Strange concedes defeat, and the devil claims his prize, signed, sealed and delivered. It’s a huge victory as he admits the power this fraction holds is a game-changer.

In the comic finale Mephisto is seen holding the Soul Stone

We don’t know what he’s going to do but with reality reset. No one remembers this apocalypse, so this is a secret only Strange knows. It remains to be seen if he’ll tell anyone when he eventually resumes duties as normal, but another key sequence in this rousing finale sees Mephisto holding up something which appears to be the Soul Stone. We know all the Infinity Stones became sentient and departed to various parts of the cosmos after Infinity Wars, so one has to wonder if, or why, this demon has it. There’s also some question as to what might happen if he imbues it with Strange’s soul, and what that might mean for the Mergiverse from Infinity Warps held inside. Only time will tell, but right now, Mephisto has a piece of the galaxy’s most powerful Avenger and that can only spell doom and gloom.