The Green Lantern Power Ring is one of the most foremost weapons in the DC Universe. From the emotional spectrum to the electric chair, their willPower allows them to do all sorts of amazing things. Even their unique superhero powers have more creative possibilities compared to any other superheroes.

However, throughout their publication, they find several imaginative uses of lantern power rings that are enough to destruct the whole DC universe. Additionally, the majority of them are pointless. For instance, why create a firefighter if you can throw a bucket of water. Despite being meaningless, they used their Lantern Power Rings in the most innovative way ever possible.

One of the darkest chapters in Green Lantern history is when Kyle Rayner found his girlfriend Alexandra DeWitt dead and stuffed in the refrigerator. Major Force committed this crime blindly in the desire of a Lateran power ring. Initially, Kyle wasn’t giving significant attention to his responsibilities, but this incident left an immense impact. 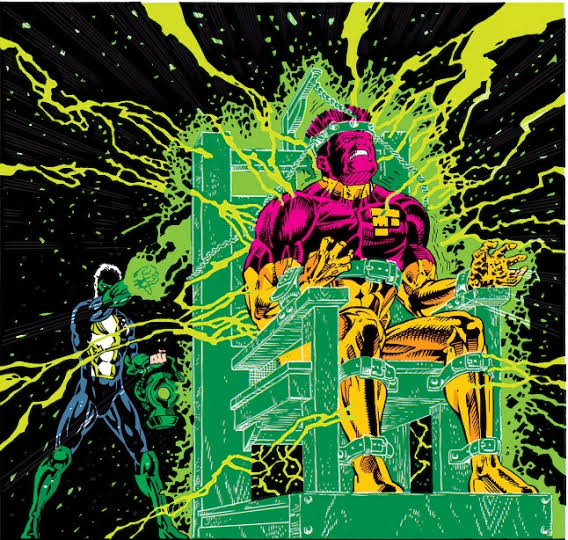 Later, in a rage, Rayner went after Major Force during a knock-down, drag-out battle. Kyle created an inexperienced green construct during the fight in the form of an electric chair to strap Major Force into and shock him with ring energy. Though, it is a sadist as well as a surprising way to use the lantern power ring.

Green lanterns have no transport problem in space. They usually need no spacecraft for space transport. However, no one can control Kyle’s impressive power showcase of the Lanterns’ power rings.

During “The One-Man JLA” Storyline, Kyle constructed the space pirate ship to find a ward superman. Of course, there are several other methods to get the job done, but no one can stop Kyle’s unusual constructions. Despite the criticism, it is interesting to see the same thing in space.

One of DC’s most depraved killers, Lobo, used his Lantern power ring to create the most dangerous weapon in history. During the comics’ sequel of injustice, Lobo combined the energy blast and made a weapon. Guess what? His appendages.

However, Lobo wasted no time getting revenge on an old foe, Atrocitus. With his ring power, he strikes the most inappropriate and giant attack. Hal and Guy can’t help but respect this unimaginable attack.

One is right if they claim the Lantern’s invention powers to the strongest one. Even Lanterns Corps use their abilities to create outstanding inventions, but the most useful and simple one is to generate enormous weapons. Additionally, weapon creation is why Kyle Rayner, Hal Jordan, and John Stewart are the Lanterns’ alliance leaders.

Soranik Natu was a neuroscientist on the Korugar planet. However, the planetarian considers Lanterns evil, so she denied the ring when it appeared to her. Later, when one of her patients crashed, she used the call to build an intricate apparatus to save him. Even she considers producing them while working as a Lantern.

Majority of members neglected Ch’p in the green Lanterns team. He even showcased it as comic relief in several Lantern stories. But the smaller an ant is considered, the more it can bring down the elephant.

However, this tiny rodent manages to bring down Superman. In the injustice comic series, Superman neglected the little squirrel while fighting with lanterns. And that’s the primary blunder he made. A few moments later, he smashed on the ground. The Ch’p uses his Lantern power ring to attack Steel.

Super glorious vehicles and exemplar powers are deadly combinations Lanterns have. Lanterns utilize cars during the fight. However, from Tron like bikes to speed breaker fighter jets, they avail themselves of various vehicles to boost their fighting skills.

Even with a battle with Sinestro, Hal Jordan control other wingmen alongside him. Of course, his pilot skills eventually helped him to be the leader of Green lantern Forces.

Another bizarre use of the Lantern power ring is the creation of a firefighter. Once, Kyle Rayner traveled around Earth with Saint Walker to reflect on the changes he has seen since becoming the White Lantern. He puts his power to fair use by creating a gigantic firefighter for burning fire on an oil rig. Besides the weirdness of making a firefighter put out a single fire, there’s also the fact that it’s entirely unnecessary. The firefighter sucked water from the ocean, which can be done by creating a big hose.

The power of a Green Lantern power ring is speculative limitless. In the comics, we have seen them creating several missiles, aircraft, etc.

However, one capability that gets overlooked is their costume designing capability. Over the years, we have seen that several Green Lantern Corps members have adopted their version of the caliber uniform. They dress in armor to enhance their fighting skills and gaining extra weaponry attach to their shoulders. However, The primary color of the armor remains the same.

The green Lanterns power ring can provide enormous energy, including the radiation emitted by kryptonite. The most important use of the artificial Green Lantern kryptonite is found in Superman: Man of Tomorrow. Martian Manhunter invaded Supe’s head to learn the kryptonite formula. Later, he gave it to Kyle Rayner to cook up a nice big batch of green crystal to take down the rampaging blue boy scout.