One of the most surprising twists in Justice League Dark has been the corruption of Nabu, the Lord of Order sealed inside the Helm of Fate. While Nabu is usually the mystical being who helps Doctor Fate, the magic god was the instigator of the ongoing magic crisis in Justice League Dark and will do whatever it takes to make his plan succeed.

The Magic God; Doctor fate would do anything to make his plan succeed

According to the junior Doctor Fate, Khalid Nassour, Nabu became traumatized by the events of Dark Knights Metal, where he saw a dark world die and also made him wonder if the same could happen to his own. Nabu’s fear is further explained when he reveals that the erosion of the Source Wall has now allowed the dark world and the Otherkind to bleed into their world, which was corrupting it. While Nabu’s plan of eliminating magic would work, it would result in the death and complete elimination of magical beings in the DC multiverse.

This plan caused the original Doctor Fate, Kent Nelson, to be in direct conflict with Nabu. Nabu eventually sealed Nelson’s consciousness away, leaving the spirit to do as he pleased. Without Nelson’s interference, Nabu opened the gateway the Otherkind needed to invade the DC Universe.

Nabu is the biggest threat 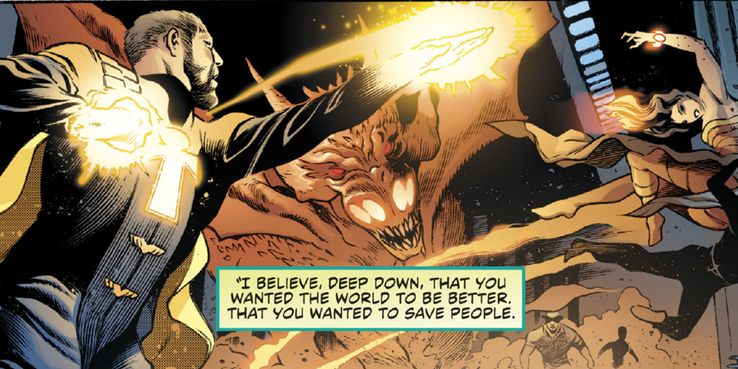 And in Justice League Dark #18, Nassour also explains that their biggest threat is not the invading forces, but Nabu himself. Nassour points out that Nabu has been the Justice League’s ally, and also knows how the JLD and their members operate. The Otherkind also are powerful, but their lack of knowledge of the JLD provides some sort of equal footing. However, Nabu’s insight could easily tip the scales in the Otherkind’s favor.

Considering that Nabu has already summoned the other Lords of Order to his own aid during the battle for Myrra, it’s safe to say that the spirit would do anything to make his plan come true at this point. While Nabu and the other Lords of Order were ultimately defeated by the Wonder Woman and Zatanna, Nassour seems willing to release Nabu and don the Helm of Fate once again to help the JLD defeat their foes.

In Nabu’s more stable days, Doctor Fate is usually a reassuring presence for DC’s heroes. Since Fate was created by Gardner Fox and Howard Sherman in 1940. With his mastery of the mystic arts, Fate is one of, if not the, most powerful member of the Justice League. With influence over both the physical and metaphysical realms in the DC multiverse, Fate’s master, Nabu, essentially controls the flow of magic throughout the DC multiverse.

And until recently, Nabu let DC’s magic users use their powers for good or evil without too much interference. However, the corruption of Nabu has been apparent for the past several issues of the series, with Justice League Dark #9 explaining how the spirit turned and showing the corruption of the Helm of Fate.

Despite his insanity, Nabu hasn’t lost his immense intelligence. He knew it wouldn’t be long before at least one of the members in the JLD would also try to find a solution, no matter how much crazy. This resulted in summoning the Other Lords of Order as a countermeasure since the Otherkind were too slow in their hunt. Even though he’s been imprisoned for many months, the Lord of Order has probably been waiting for the Justice League Dark to call upon him for help. With Nassour seemingly positioned to become Nabu’s new host, the return of Doctor Fate could spell doom for the Justice League and the rest of the DC Universe.