While as an audience, we do love a good plot twist or a cliff-hanger that keeps us wanting for more, there is a different sense of content when a movie has a satisfying finale. 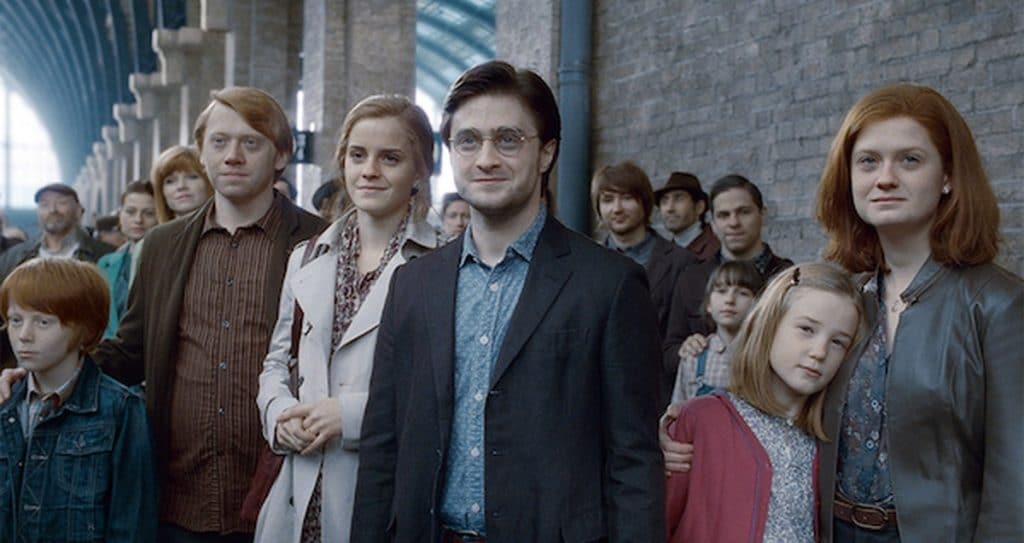 From the Harry Potter nostalgic finale to the explosive finale from The Interview, different movies have entertained audiences with various takes on what is the perfect way to end a movie.

And when a filmmaker crafts that perfect finale, you’ve got yourself a movie that will stand the test of time.

Here is a list of movies that have some of the best endings of all time. 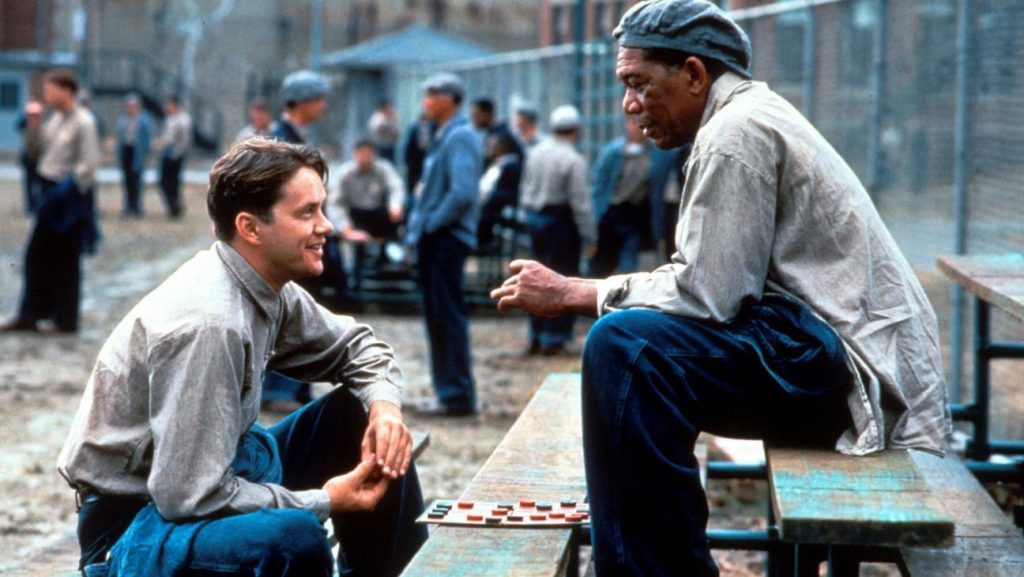 The scene of two friends reuniting at a beachfront after almost a year is as satisfying as it can get.

Andy Dufresne breaks out of jail after digging a tunnel under the Pennsylvania state penitentiary that took 19 years, he turns his dream into a reality.

He goes to Mexico and finally opens a hotel that he had longed for years.

Morgan Freeman’s Red does his time in jail, waiting for almost another year before he is released with parole after serving 40 years.

As soon as he is out, he breaks his parole, reclaims a wad of cash that Andy had left for him, and heads for the border.

The ending of the movie gives us Red and Andy meeting at the beach and giving each other a hug and if that’s not satisfying, I don’t know what is! 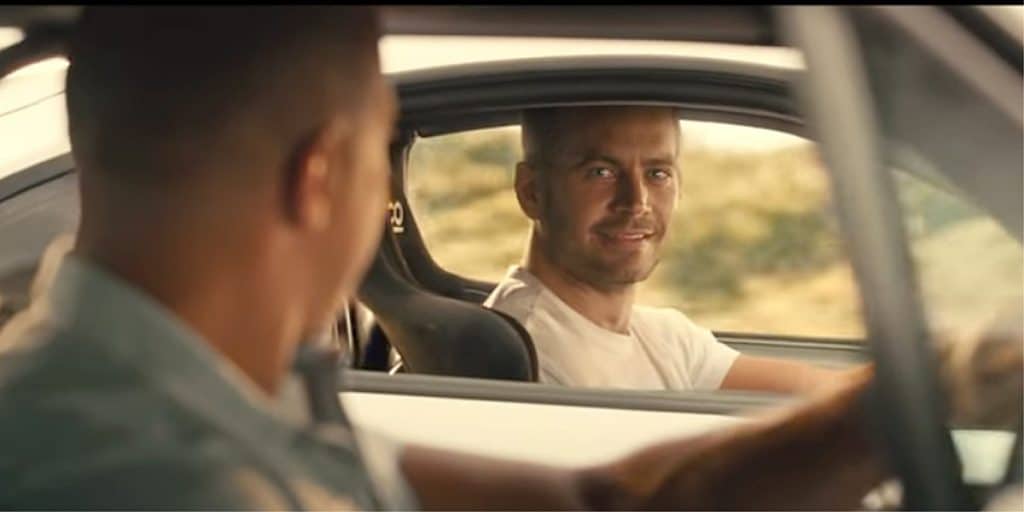 The seventh movie of the Fast & Furious franchise moved the audience in a way that left us both happy and sad.

Paul Walker had lost his life in an accident, while the movie was still incomplete.

His brothers, Caleb and Cody were used for the remaining scenes that involved the character of one Brian O’Conner.

The end of the movie, sees Walker’s Conner pulling up his car next to Diesel’s Dom Toretto, asking him why he didn’t say goodbye.

What followed is a rendition of “See You Again” by Charlie Puth and Wiz Khalifa, as a montage of memories between Dom and Brian are shown to the audience through flashbacks.

The satisfaction of that scene left not a single dry eye in the theaters.

Quentin Tarantino is quite good at twisting history, and he did that with this World War II flick.

Apparently, the ending of the movie wasn’t in the script, and he wrote it all himself from snippets of dialogues before handing it to his first Asst. director. Which went on to become one of the best and most satisfying movie endings of all time.

The end starts with Donny Donowitz machine-gunning Adolf Hitler and his right-hand man to pieces, which is of course pretty satisfying.

But the best part comes at the end when Brad Pitt’s Aldo Raine gives Christoph Waltz’s the “Jew Hunter” a permanent mark of the swastika with his Bowie knife. 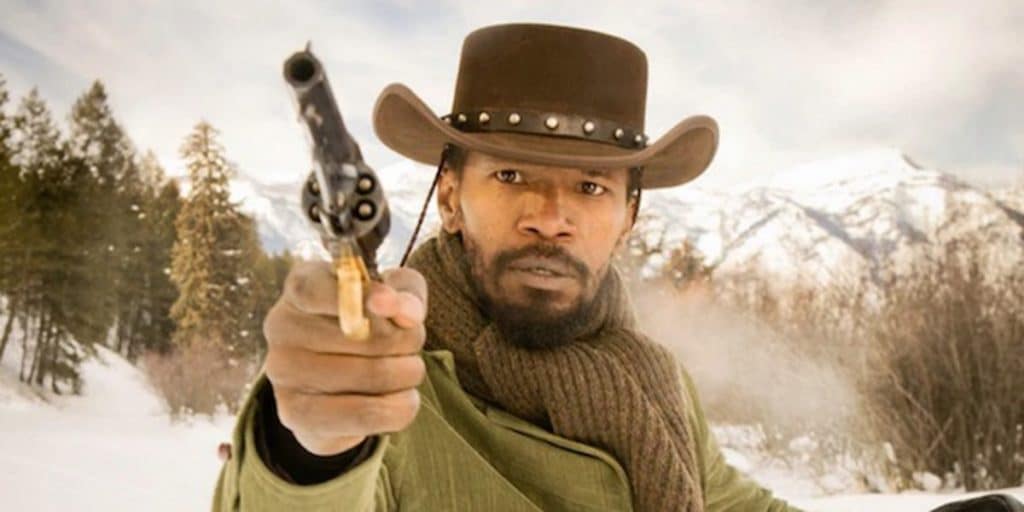 The Quentin Tarantino movie for the most part showed us slaves being beaten black and blue.

So when Django finally returns to Candieland at the end, we expected some retribution.

But when it actually happens, and he blows up the mansion along with Samuel L. Jackson’s old Stephen, the satisfaction of that scene is on a different level.

With the bad guys trampled over, Django liberates his wife – the beautiful Kerry Washington, and the couple rides off into the darkness, clad in weapons, ready to face whoever might come their way as the spaghetti western theme song plays in the background.

That complete scene is a movie on its own. 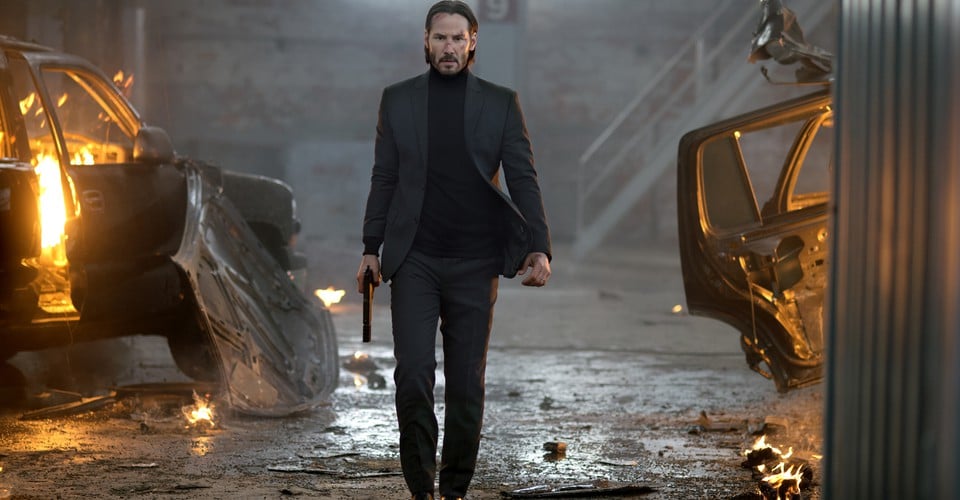 When John Wick went on a revenge spree, killing 77 gangsters on his way to find justice for his dead beagle, Daisy, no one in the audience objected.

Keanu Reeves gives a stellar performance as a once retired mercenary who wants nothing more than to teach a brat kid some lesson.

In the end, he kills Alfie Allen’s Iosef Tarasov and his father to gain retribution. And that was plenty satisfactory on its own.

But when he goes to get his wounds treated after the fight and comes out with a pit bull puppy in his arms, well, that’s what you call a happy and satisfying ending. 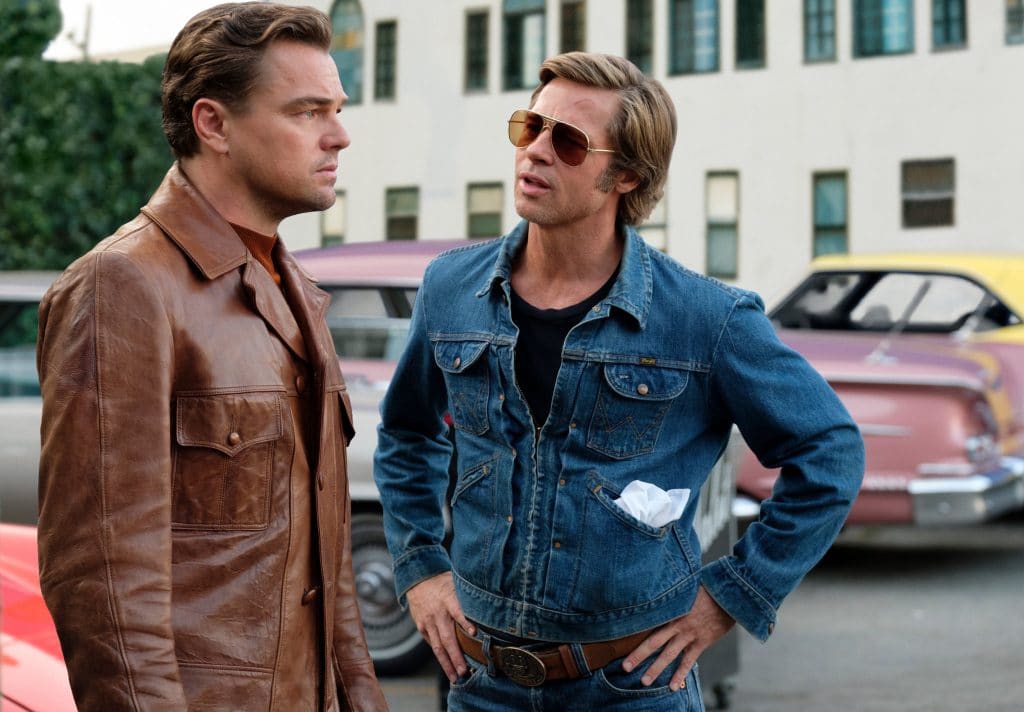 Changing history through his movies is a Quentin Tarantino feature and he does that again with the infamous Manson Family Murder.

Only this time, completely different sets of people die. Instead of breaking in Sharon Tate’s home, they unwisely chose to enter DiCaprio’s Rick Dalton’s home, where his stunt double slash driver slash bodyguard Cliff Booth played by Brad Pitt, is with him.

What follows is an extremely violent yet super satisfying set of events.

Tarantino goes to town with the Manson Family members, and no one in the audience bats an eyelash at their fate, especially knowing what had actually gone on to happen in real life.

As Booth is being taken to the hospital in an ambulance, Tate and her friends come out of their mansion and ask Dalton to join them for a drink. And yes, for that movie, and that character, it was pretty damn satisfying. 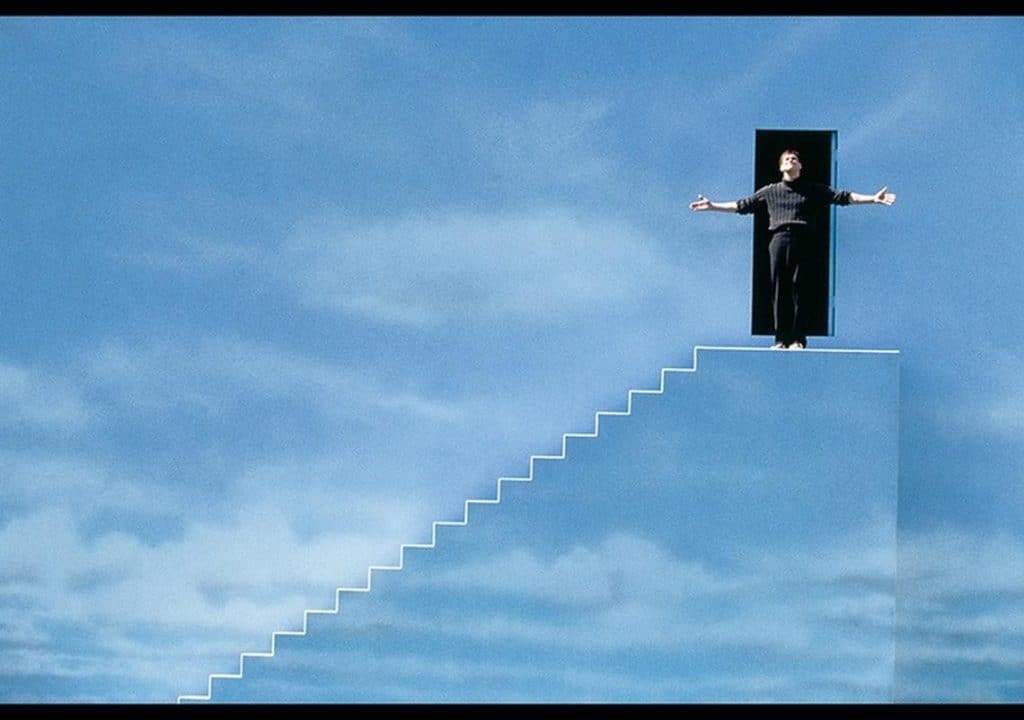 A reality star who doesn’t know he is being filmed – It’s bizarre and still manages to touch the hearts of the audience.

Jim Carrey gives one of his best performances, with the movie being cherished all around the world even today.

As Truman gets suspicious, the cry of “Free Truman” gets louder.

And just when the audience thought that his producer had managed to deceive Truman again, we see him escaping his ‘home’ through a makeshift tunnel.

Despite being afraid of water, Truman manages to withstand a man-made storm, sailing towards the edge of the world as he knows it. and despite being apprehensive about what lays in the outside world, Truman leaves Seahaven Island behind and exits with a bow and his signature line – “In case I don’t see you, good afternoon, good evening, and good night.” And that scene is as satisfying today as it was 2 decades back when the movie was released.

The end of the Infinity saga was as good as we had hoped it would be, maybe better.

The movie saw every Marvel hero introduced until them, assembling for the first time to defeat the mad Titan Thanos before he can manage to do any more damage than he already did. “I am Iron Man” can be heard muttered by old and young alike, after more than a year since the movie was released.

From Tony’s snap to Thanos and his army turning to dust to Cap passing on his mantle of Captain America to Sam, every single scene satisfied moviegoers who had been waiting for years to see how this saga would end.

And when Steve finally gets his dance with Peggy with simple jazz music playing in the background, yeah! Totally satisfying. 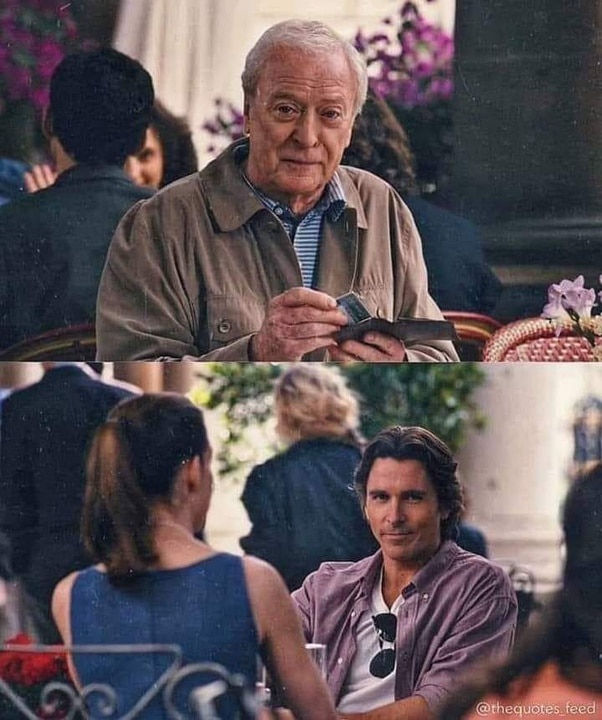 Christopher Nolan’s The Dark Knight trilogy, although not part of the DCEU, is a masterpiece all on its own.

And although the 2nd movie in the trilogy was probably the best out of all three, the ending of the trilogy is one of the most satisfying scenes of all time.

Batman saves the city from Bane and his bomb, and then he is gone, everyone thinking Bruce Wayne died saving the city he loved so much.

But then came the ending as Alfred goes to Florence and he sees Bruce and Selina, as he drinks his coffee, just like had envisioned.

And at that moment, everyone in the theater clapped and whistled and hooted in happiness.

We finally got Robin, the Wayne manor is now dedicated to helping the at-risk and orphaned children.

And Bruce Wayne may be gone, but the Batman still lived. And now there is a man on the other side of the word, living the best life he deserved. Definitely satisfied! 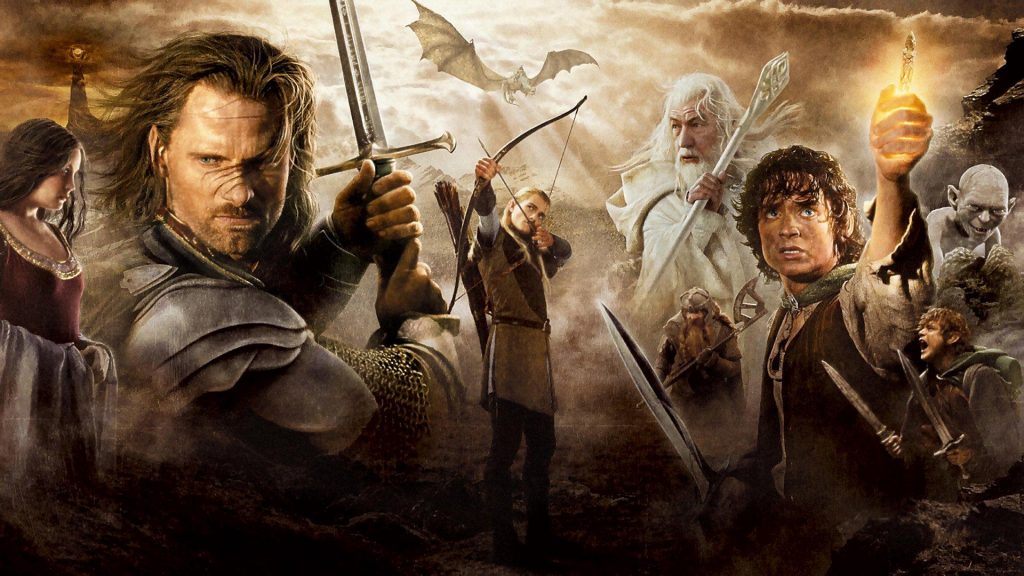 If there was ever a movie that came close to the book in all its aspect and the director not compromising his vision for anything, that would be the conclusion to The Lord of the Rings trilogy.

The last battle in itself was epic, the final movie probably being the best of all three.

The One Ring is destroyed; Aragorn is crowned king, gets his princess and the four hobbits get the honor of their lives before returning to the Shire.

The four – Sam, Frodo, Pippin, and Merry – share a silent toast, but that’s not where it ends.

The ending comes with Sam marrying his sweetheart and Frodo leaving with his uncle Bilbo, Gandalf, and the elves for the Undying Lands, leaving Middle Earth behind.

Sam is handed the Red Book of Westmarch and he finally returns to his family. And that will always be one of the most satisfactory movie endings of all time.