The son of Odin, The god of thunder and The sole owner of Mjolnir, The all-mighty Thor had an impeccable Journey as a Super Hero both in the cinematic and comic universe.

He can be considered as the most significant and most potent Avenger in one way or the other. Due to his combination of Power and sarcasm, he had gathered a separate fan base in the MCU. 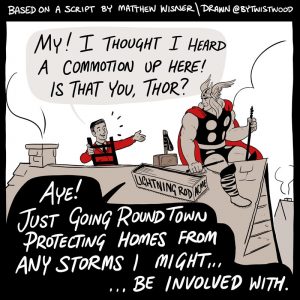 There are many unforgettable moments with thor like his unexpected entry to Wankana in Avengers infinity war, the nerve battling fight with Asgardian Godness of death Hela, and of course, his contribution to defeating Thanos.

However, there is one Scene that fans can never forget and which is unmatchable with any of the views is his visit to Mr.Rogers Neighbourhood in a Fan Webcomic.

Mr.Rogers Neighbourhood is released on Television way back in 1968 and gained instant popularity; it was one of the most loved shows of that time.

The show was started by none other than Mr.Rogers only. Unfortunately, he passed away in 2003, but Marvel fans can never forget his massive contribution to the MCU. 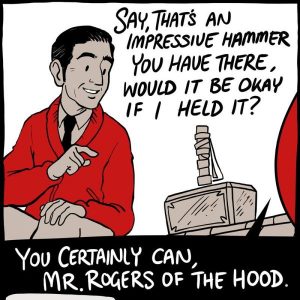 Coming back to Scene, it was a stormy day, and Thor was setting up lightning rods on the roofs of the houses by moving one after another shelter, so they do not get damaged by the effects of the storm.

Due to some commotion, the owner of the houses moved towards the rood, and he found Thor there. More than seeing Thor, he seemed to be more interested in Thor Hammer(Mjolnir). 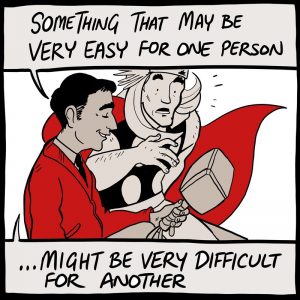 The two talked for a while, and then he asked, can he hold if? The Mjolnir?

Reacting to this, Thor laughed in his mind and greeted him for a try. Though Thor was quite confident about it that Rogers cannot move an inch of that hammer still, he, for the sake of Rogers he offered him for a try.

Thor was shocked to see him lifting the hammer in a single shot, and surprisingly Roger did not found the Hammer heavy.

He said, ” You sometimes know life is a lot like that, something that may be easy for a person might be difficult for another one.

The words by Rogers was quite motivational and a lesson for the Thor. Life is unpredictable what is difficult for Thor can be very easy for someone else