While Ms. Marvel is getting ready for her small screen debut on Disney Plus with her own show, her adventures continue in the comic books. In The Magnificent Ms. Marvel #11, Kamala Khan is facing off against herself. Or rather it’s kind of her suit which is causing trouble for her.

Ms. Marvel’s greatest hero is Captain Marvel. But is her hero the most powerful in the Marvel universe? Find out in the video below:

Ms. Marvel Fights Her Suit To Save Everyone

Ms. Marvel’s symbiotic suit is her biggest enemy right now. But Stormranger (her sentient suit) is causing her a lot more trouble that is making her do more than just look for a new disguise. Her now sentient suit is now homicidal and is going across town looking for its new target. The situation is bad because Kamala has to face not just a version of herself but she also has to save her former enemies from her own clothes…literally.

So, Ms. Marvel is now stripped of her disguise and in a battle with Stormranger. But there’s a little hilariosity hidden in this because she now has to think of a disguise quickly when two civilians catch her hiding in an alley. Fortunately, her new disguise isn’t that bad and no one is able to recognize her.

How Did Ms. Marvel End Up Fighting Her Own Suit? 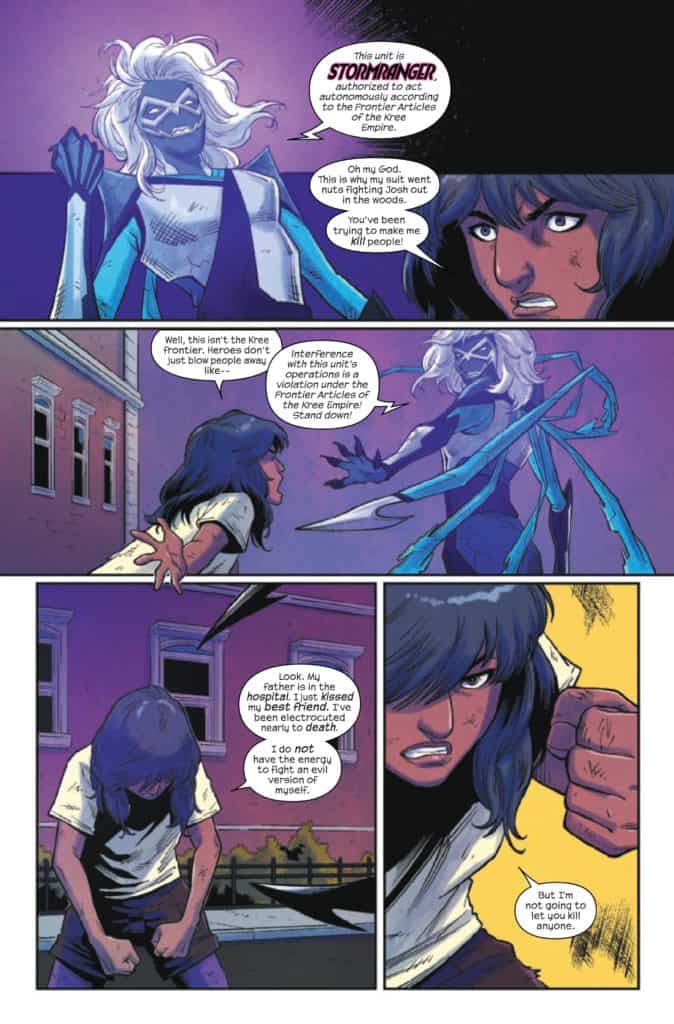 The suit now knows a few things about Kamala herself as well. It figured out how to use Ms. Marvel’s genetic imprint to take on a life of its own. It seems like Stormranger chose Ms. Marvel on Saffa for its own nefarious causes. After all, Ms. Marvel’s powers would make her the perfect candidate for the Kree armor’s upgrade.

This whole arc provides a great opportunity for Ahmed to explore who Kamala is beyond her powers since the suit matches her move for move and is able to exploit her powers better than her. Overall, this should be an interesting issue nonetheless.

Magnificent Ms. Marvel #11 is available in your local comics shop and online.