Wolverine is Marvel’s most beloved and famous mutant. With the vast and current success of the Marvel Cinematic Universe, it is all bull’s eye for the successful franchise. Positively, with its recent success, we can eventually catch a glimpse or teaser of Marvel’s favorite mutant team X-Men. We all know how conversations are already going on about how Marvel will include mutants in the Cinematic Universe.

Including Wolverine in the Marvel Cinematic Universe would be a dream come true for Marvel fans. Award-winning actor Hugh Jackman impersonated Wolverine’s role in the Fox Studios. X-Men movie franchise for almost 17 years, ending his period with the critically praised Logan. 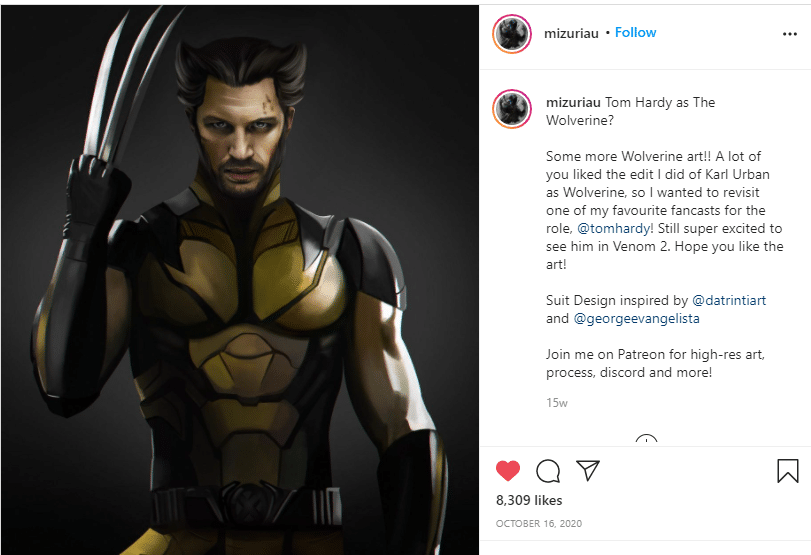 Discovering a successor to Wolverine and a Marvel Cinematic Universe depiction of Wolverine. It will be a massively difficult task because of Jackman’s legendary characterization of a popular Marvel mutant. Lately, fans have been doing their own fan casting and even created concept art based on those fantasy castings. One fan-casting that has drawn attention is award-winning actor Tom Hardy, who has set social media on fire.

Several fans recognize that Tom Hardy is no newcomer to superheroes or comic book films. Fans reminisce that Dark Knight Rises has an iconic performance as the legendary Batman villain Bane. Getting significant recognition for his depiction as the legendary Batman villain. But he is also a comic superhero, performing the character of Spider-Man anti-hero Venom. Even when, Venom received mixed reviews. Tom Hardy’s portrayal was received with an overwhelmingly positive response from both critics and fans.

Hardy’s fame in the superhero fan community is not unusual, but many people want or dream of him in the Marvel Cinematic Universe. Recently, a fan of a new concept on Instagram art created by artist Mizuriyu featured Hardy as Wolverine. In fan art, it shows Hardy wearing the iconic yellow spandex suit that Wolverine wore in comics in a contemporary setting. The artwork is excellent and precise as it shows what Hardy can look like on Wolverine.

Tom Hardy as Wolverine may be a massive dream. As the actor is for the time being contracted to impersonate Venom in Sony’s Spider-Man character film universe. Still, this could invariably change as Hardy could be in the Marvel Cinematic Universe as a different character rather than Venom. It is also more suitable that Marvel and producer Feige Feige may have some other actor not entitled to depict Wolverine in the Marvel Cinematic Universe.

Wolverine is one of Marvel’s most famous comic book characters. The character will eventually make his presence felt in the Marvel Cinematic Universe, with many appearances on various forms of media. Jackman’s portrayal as Wolverine will forever be rememberable in the history of the superhero film. Whoever Marvel will decide to cast as Wolverine in the Marvel Cinematic Universe should be someone who can honor and pay tribute to the character.