“Ant-Man’s line, ‘As far as I’m concerned, that’s America’s ass,’ was not in it for quite a while. I think it was [executive producer] Louis D’Esposito or someone who said, ‘What happened to that funny line about America’s ass?’” Feige revealed during Vudu’s Endgame viewing party on Twitter.

Once a version of Avengers:Endgame which didn’t include Ant Man’s comment on Captain America

“We’re like, ‘Is it funny? I don’t know, let’s try it in the next test screening,’ because we screen all of our movies multiple times for audiences. And it killed, it killed instantly, without question. And it stayed in the movie, and later in the movie it a got a reprise in some additional photography where Cap himself comments on his own ass.

When the time-traveling Captain America from 2023 looks down on his defeated 2012 self and admits “that is America’s ass,” the moment “still got such a positive feedback from the audience,” added executive producer Trinh Tran. 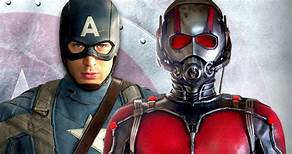 “We questioned, let’s be honest, we questioned, ‘Is it in character? Is it in the character of Steve Rogers to make a comment on his own ass?’ And the thought was, yes, it works, and the audience likes it,” Feige said.

“But also, we were building a version of Steve who actually was growing, and who was loosening up, and who was leading towards the decision [to retire]. It was part of a character shift, maybe we’re just justifying the laughs, but it was part of a character shift to get to the decision he makes at the end of the film to stay with Peggy and get some of that life Tony was always telling him to get.”

The joke was “a little meta,” Endgame co-writer Stephen McFeely previously told the Los Angeles Times when prompted to explain the origins of the gag that proved to be Evans’ final line as the character.

“Chris Evans has never been comfortable with that outfit from the first Avengers movie,” McFeely added. “And so in the rearview, it’s a little way to wink at how that was then, and this is now. And then it sort of just built from there. By the time we got to the fight scene where he defeated himself, his butt is on the ground and he was just sitting there for a callback.”