The trailer of the upcoming movie, Black Widow gives us an insight into the world of Natasha Romanoff, however, the movie will also be introducing us to new characters, one of them being, The Red Guardian!

If you look closely, we can see Stranger Things’ actor David Harbour suit up in a costume resembling that of Captain America, but red. Don’t get your head all scratchy trying to join the dots because we have you covered on every information about the Red Guardian and his origin.

On that note let us unravel Natasha Romanoff’s Russian-accented ally. Comic Books tell us that Red Guardian aka Alexi Shostakov, is a starfighter pilot for the Soviet Union during World War II.

He has extraordinary combat skills and intelligence and his loyalty to the KGB got him the chance to undergo training and become Red Guardian, basically, he is the Soviet Union’s answer to Captain America.  Though he may bear similar aesthetics and talents, he isn’t an exact copy of our beloved Captain America.

He first appeared in the comics in 1967 as the enemy to Earth’s mightiest heroes, the real deal was when it was revealed to be a person related to MCU’s Black Widow.

Did you know his connection to Black Widow, goes way back in time? According to the comics, before they became their costumed characters, they shared a romantic relationship however, in the movie the Red Guardian appears to be his adoptive father. 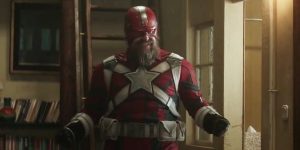 Whichever maybe the relationship it had to be called off, thanks to KGB! Alexi’s Red Guardian training forced him to abandon his past life.

The KGB faked his death and trained him in secret, keeping his survival a secret from Natasha. He became an expert in hand-to-hand combat and a highly skilled athlete. In addition, he carried a throwing disc on his belt which could be used against an opponent. Magnetic force returned the disc after throwing.

Natasha eventually goes on to be a part of the Avengers as Black Widow, and if the movie does follow the path defined by the comic books, she would engage in a face off against the Red Guardian only to come to the horrifying realization that the Russian vigilante is her thought-to-be-dead-husband or in this case her step-father.

The Red Guardian seems to be an MCU character with quite a bit of weight to him owing to the fact that Alexi is one of the many Red Guardians who form a part of the MCU. 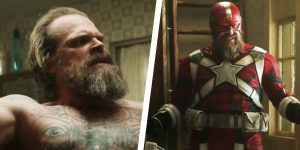 This sure makes one wonder how David Harbour’s goofy portrayal of Alexi Shostakov would highlight his tragic past. Till Russian Captain America’s secrets are revealed in the Black Widow movie which  is supposed to hit theaters in July, 2021, do not forget to check our channel for updates on the MCU and other Marvel endeavors.