Media Molecule’s Dreams is a game that lets players build their own worlds. It is releasing next month and the trial versions are still in progress. The game has been in early access to players and the users are given full fledged freedom to show their creativity. But a recent user interface might be the most realistic one to have been constructed yet. John Beech, a senior principal designer, at Media Molecule has shared the project this week called the Full Beech Breakfast. The project consists of a sumptuous meal which anyone would love having in the morning.

Beech revealed the creation via Twitter this week. The description of the Full Beech Breakfast said that it drew inspiration from an English breakfast and it was sculpted entirely by Dreams. The images look too realistic to imagine and the developer shard another string of photos which showed a blue Imp jumping on the screen. Beech said that it was a surreal experience to see the Imp jumping as they hopped once they were sure that the surface they sat upon was a painting or a painting. The project proves that via Dreams anybody can create anything they want. 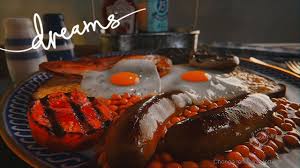 What does the game aim at?

The whole point of the game revolves around the fact that the user should experience creative freedom. Beech also clarified that anyone can reach up to his level of expertise once they have their creative intellect flowing. However he clarified that it is not an overnight task as he has spent years developing it. He said that with determination one can surely master the game.

‘Dreams’ is all set to be released on February 14th this year and the medium will be Playstation 4. There are surely tons of other creations as beautiful as the Full Beech Breakfast coming in!