A teenage hacker on PS4 is disconnecting players from PSN if “they disrespect” him. In simpler words, welcome to the gaming world in 2018.

A teenager who goes by the name, “SpangeBaab” on PSN apparently does some magic and has the ability to disconnect any he wants to from PSN, whenever.

User DowntownReaper shared a run-in with the hacker on Reddit which began after the hacker joined him and his friend’s party and began making random noises. He was quickly kicked out. After that he tried to rejoin the party on many occasions and every time he got kicked out, he permanently disconnected one member from the network.

None of the user’s friends was able to reconnect to the PSN since this happened. Outlet MP1ST found SpangeBaab’s profile which confirmed that he did hack the Reddit user. 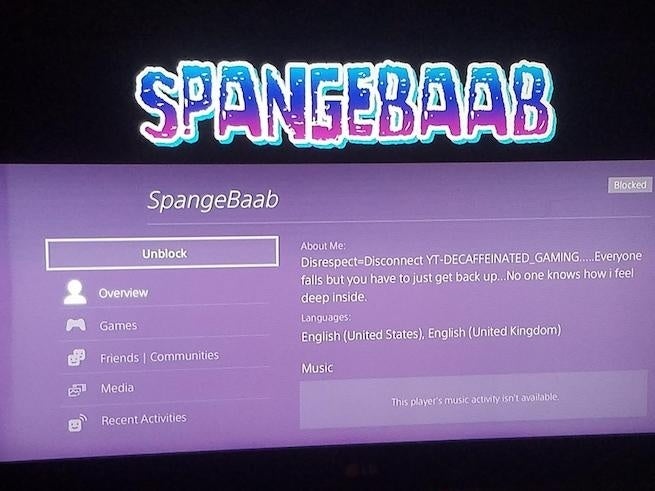 As one may have noticed disrespect means to disconnect and something tells me that he had been disconnected quite a few times. The hacker is able to do it because voice-chat is peer to peer, meaning all you need is to inspect the network packets to learn someone’s IP, which allows you to ban them.

In order to stay safe from these, a user would likely have to set up a new network connection and set new IP’s manually. These types of DDOS attacks aren’t very uncommon on PS4 and other gaming systems. While Microsoft and Sony haven’t gotten any better at preventing these attacks, this stuff has become more common than it should be.

At the time of writing this, SpangeBaab’s account is being “moderated.” However, this should be taken with a grain of salt.