Ray Fisher, who played the role of Victor Stone/Cyborg in the Justice League, first came out with allegations against the director of the movie Joss Whedon on July 1st 2020. 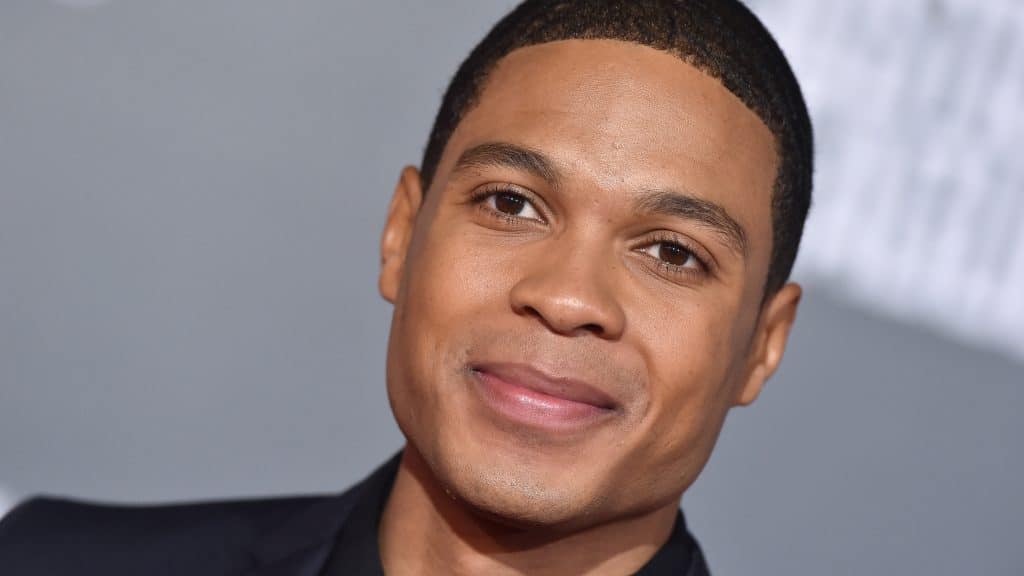 Days after praising the director, Fisher retracted his tweet. Soon after he came out with his complaints about Whedon’s abusive and unprofessional behavior on set.

Whedon had taken over Zack Snyder after he stepped down from the directorial helm following a tragedy in his family.

During the 2017 Justice League panel in SDCC, Fisher was seen praising Whedon, saying Snyder “picked a good person to come in and clean-up — and finish up for him.”

But this past June, Fisher retracted his tweet and then days later came forth with his complaints about the ill-treatment he encountered on the sets under Whedon’s leadership.

He went on to accuse Geoff Johns and Jim Berg for enabling Whedon in his wrongdoings. 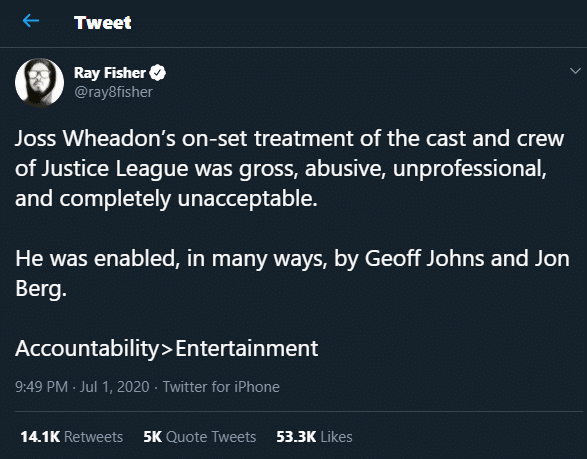 Fisher even accused Johns of threatening his career after he came out with his allegations.

In August, it was revealed that WarnerMedia was investigating these allegations following the claims made by the actor.

Recently, Fisher also came forward with a statement against Walter Hamada, President of the DC Films.

He said Hamada attempted to “throw Joss Whedon and Jon Berg under the bus” and asked him to retract his accusations against Johns. Fisher refused. 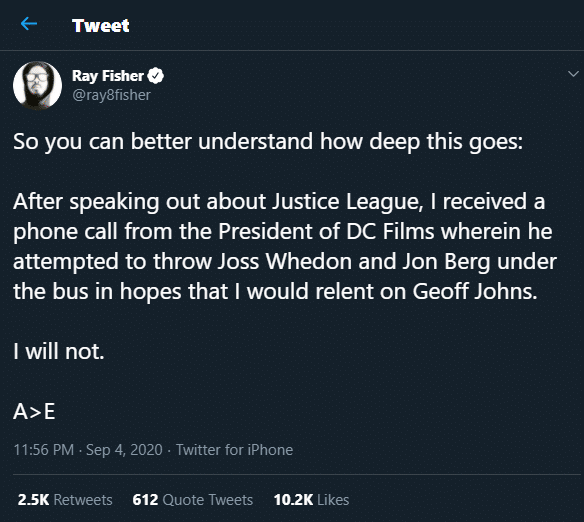 Now Warner Bros. have come forth with their own statement regarding the issue:

“In July, Ray Fisher’s representatives asked DC Films President Walter Hamada to talk to Mr Fisher about his concerns during the production of Justice League. The two had previously spoken when Mr. Hamada asked him to reprise his role as Cyborg in Warner Bros.’ upcoming Flash movie, together with other members of the Justice League.”

“In their July conversation, Mr. Fisher recounted disagreements he’d had with the film’s creative team regarding his portrayal of Cyborg, and complained that his suggested script revisions were not adopted. Mr. Hamada explained that creative differences are a normal part of the production process, and that a film’s writer/director ultimately has to be in charge of these matters.”

“Notably, Mr. Hamada also told Mr. Fisher that he would elevate his concerns to WarnerMedia so they could conduct an investigation. At no time did Mr. Hamada ever ‘throw anyone under the bus,’ as Mr. Fisher has falsely claimed, or render any judgments about the Justice League production, in which Mr. Hamada had no involvement, since filming occurred before Mr. Hamada was elevated to his current position.”

“While Mr. Fisher never alleged any actionable misconduct against him, WarnerMedia nonetheless initiated an investigation into the concerns he’d raised about his character’s portrayal. Still not satisfied, Mr. Fisher insisted that WarnerMedia hire an independent third party investigator.” 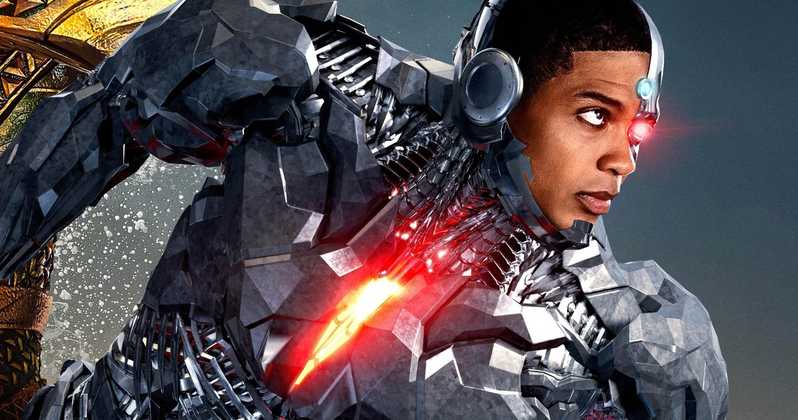 Ray Fisher can be next seen in the role of Cyborg in the much-awaited #SnyderCut of the Justice League movie which will release on HBO Max in 2021.