2010 saw the release of Nicki Minaj’s first studio album Pink Friday and the young rapper went on the hit daytime talk show Live! with Regis and Kelly to promote the endeavor. But she had quite a mixed experience during her promotional stint on the show. Regis Philbin, who was 79 years old at the time, made a very controversial move when he inappropriately touched an almost 27-year-old Nicki Minaj’s derriere, while on live television. His actions had everyone shocked, including his co-host Kelly Ripa and Minaj herself.

Nicki Minaj had her bigshot debut album Pink Friday released in November 2010. And to promote the same, she went on Live! with Regis and Kelly to perform her number Right Thru Me. Philbin was quite welcoming to this particular guest and after Minaj’s terrific performance, he shared with the audience how Rolling Stone had named her the ‘Queen of Hip Hop’. But that wasn’t the end of his compliments.

A while later, he went on to comment on her looks and said, “I love the way you dress too.” Minaj was wearing a short bodycon red and purple dress, with red tights and black knee-high boots.

Also Read: “How sad for me. Luckily ignorance is bliss”: Kelly Ripa Would Have Refused to be Regis Philbin’s Co-Host Had She Known Behind the Scenes Details Before She Was Hired

Philbin went on to say while stroking the front hemline of her dress, “This looks like you got a little strap around here,” and then he lightly spanked her bottom while saying, “You know what I mean.”

The entire crowd was in shock, but Philbin didn’t seem to have any qualms. He looked jolly and unapologetic. Minaj’s instant reaction was to turn her head with a gaping mouth clearly expressing her shock at what had just happened. While, Kelly Ripa exclaimed in an incredulous tone, “Regis! What just happened?!”

Philbin then went on to talk about Lil Wayne who is often credited with discovering and helping out the Monster rapper. Philbin exclaimed his love for Wayne and later asked the Trinidadian rapper what is his advice to her. To this, the Bussin rapper replied, “Wayne tells me to go hard.” Philbin again snapped the opportunity and quipped, “Go hard? Wish I could!”

Again, the MotorSport rapper couldn’t help but smile uncomfortably while the audience cheered with surprise. Philbin went on to ask the audience to “just stop it” while doing a gesture that implied ‘shut up’, clearly thinking of it all as a harmless joke. But even over a decade later, few take the actions as harmless or unproblematic.

Even Minaj went back home to tweet her reaction, which read, “LOL. I was in shock!” 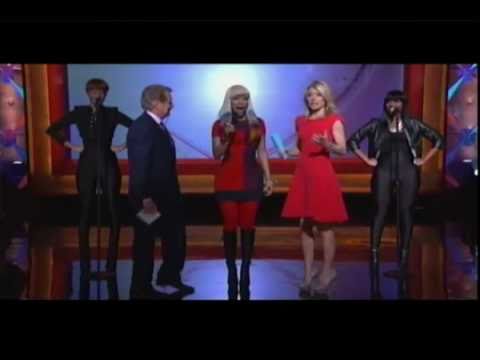