When Justice League hit theatres in late 2017 DC fans instantly knew something was wrong, Zack Snyder who previously directed Batman V Superman Dawn Of Justice was all set to return to the Director’s chair, unfortunately during production he left the project due to a family tragedy, hope wasn’t lost as Avengers director Joss Whedon was announced to do heavy reshoots. Although fans were concerned about big changes to the movie he insured that he “Would stay true to Zack’s vision” 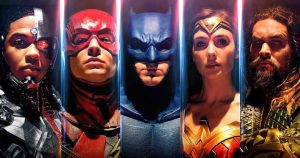 And then the movie happened, with Zack’s gritty takes mixed with Whedon’s Comedic acts the movie was a mess. Superhero fans didn’t even support Warner Bros. With the film estimated to have lost over 100 million dollars! And unfortunately it wasn’t a huge surprise, Watchmen, Man Of Steel and Batman V Superman Dawn Of Justice were all directed by Snyder, and each movie were visually stunning, something Justice League didn’t have to offer.

The Snyder Cut is an ultimate 3 and a half hour version if the movie, Snyder himself on multiple occasions confirmed it exist, now it’s trending in the USA. This is certainly a rare thing to happen especially for a movie that came out two years ago, see an official Twitter screenshot down below: 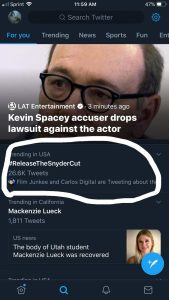 Although Warner Bros. Executives would usually be happy that there property is trending, it’s extremely clear that they don’t want to release this thing, original director Zack Snyder showed many images from his version of the film including…… Darkseid!, Since then many groups on social media have been active.

DC fans are definitely showing Warner Bros. That they won’t give up, one person even flew an airplane with a larger banner saying #ReleaseTheSnyderCut. Although it’s unlikely that the studio will indeed release the Snyder-Cut, it’s caring to know that fans are standing with Zack Snyder.