Rick and Morty have introduced a new opening theme for the very first time, and fans all were playing a guess on which all scenes would be seen in the sequence into the actual episodes of the series. As of now, everyone knows the wild turn of season 4, but the finale of the first part has raised the bar.

The unexpected situations happen all the time

A flat tire situation completely overturned with Morty being bitten suddenly by a space snake only into Rick blessing an entire planet of snakes with the ability to do time traveling, and this lead on to a terminator situation filled with deadly robots. Morty learns that the dead snake which bit him had been a lonely female snake that had been sent to the space to take part in the evolutionary cycle of technology from Rick. Morty, with guilt, catches another snake from Earth and sends it to the area. It was then revealed that the first-ever snake had come from an advanced society of snakes that had grown to know a lot more about their mysterious visitor.

The breeding with the Earth snake then goes on to destruct the evolutionary chain that was already in place, and this leads to Morty in the terminator situation. As usual in the Rick and Morty style, Beth had come to save them.After the chaos, Rick and Morty go to the snake planet only to find that T-800 like snakes now run the society. To fix this, Rick does the time travel math and closes the loophole of the snake terminator situation going on in a series of weird events paying homage to terminator and every other time travel movies and series. 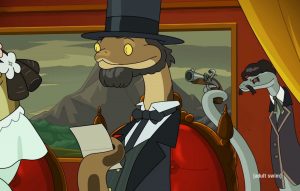 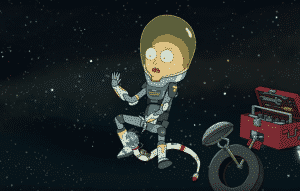 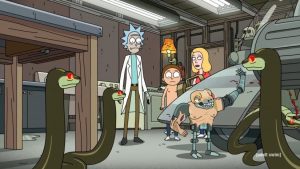