Hasbro has finally announced a new Risky Legacy game which is set to come out next year. Last week Hasbro went on to announce Risk Shadow Forces; a new legacy style board game that is actually set in the near future where the world is now threatened by the real and intense issues of climate change and diseases.

The game will allow the players to take control of a faction as they battle for control of a new energy source. Each faction will be having its own abilities and specialties with the yellow faction using modern technology such as drone strikes and the white faction would be using toxic attacks to hit the enemies with random yet critical damage. Players will also be given the freedom of switching factions through the game as they will be controlling a single warlord with the ability to take command of whatever faction they feel will be best suited for specific skirmishes. 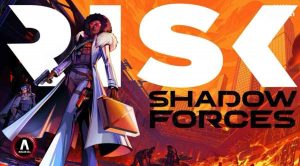 The individual battles will play out over two battlefields and the players send armies out on a global level as well as participate in covert skirmish battles. Each warlord’s individual abilities will come into play as they convert missions and the result of those will be spilling into the global map!

Just like their other legacy-style games, Risk Shadow Forces will have an overarching storyline that plays out in between sessions. Players will add new rules to the game and even place permanent stickers on the board and rip up components and cards as the story moves forward.

The original Risky Legacy game introduced the legacy style format to top table games. This particular style of the game encourages players to make permanent changes in the game too. Risk Legacy had players end up with unique maps and customized routes in which certain areas on the map were permanently inaccessible or needed some additional risk.