The coronavirus pandemic has adversely affected several businesses due to the lockdown imposed. The COVID-19 virus spread has affected people at various levels. In this hour of need, many celebrities have come forward and offered a helping hand to those in need. A glimmer of hope emerged in the form of Ryan Reynolds. The actor came forward and made an announcement on Instagram about how the virus has hit North America and has affected the people here.

Ryan Reynolds, along with his wife, actress Blake Lively are all set to provide a helping hand and donate a sum of $1 million to Feeding America: US Hunger Relief Organization and Food Banks Canada. The virus has affected every corner of the country, including older adults and low-income families.

Alongside, this announcement the couple also added a number of their best friend, Hugh Jackman. The reason for adding Hugh Jackman’s number was to troll him and let people know that for any call to action, they need to contact him on the given number. The Trolling Game Between Hughman and Reynolds

The camaraderie shared between Hugh Jackman and Ryan Reynolds is a known fact. In the online world, both the actors enjoy pulling each other’s leg and are constantly seen roasting each other while during interviews. 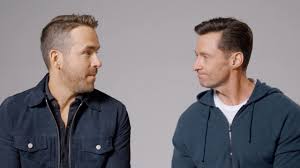 The recent story posted by the couple received mixed reactions from their fans. Many laughed it out, whereas others expressed appreciation for the actors for their noble deed. Many people also funnily claimed that are all set to call Hugh Jackman right now.

Ryan Reynolds and Hugh Jackman have been trolled about their bromance, on several occasions earlier as well. The constant feud between Reynolds and Jackman is considered to be the favorite amongst all the other Marvel superhero feuds.

However, no one knows till when the trolling battle between the Jackman and Reynolds will continue. Twitter includes several trolling tweets that are shared by both actors from time to time.