Wes Craven’s Scream (1996) reinvented the slasher franchise, although some may argue that John Carpenter’s Halloween (1978) saved the failing industry lets look at the facts. In the late 90’s Horror films were either comedy spoofs or ridiculous, the interesting thing about scream was you didn’t know what to expect! That opening scene is probably the greatest horror scene of all time, it’s now been reported by Bloody Disgusting that SpyGlass Entertainment is finally tackling a new Scream movie! Fans of the franchise are aware that Ghostface has been resting since 2011 (despite the series taking place) and the horror icon is finally returning. Legendary horror director Wes Craven directed every instalment of the horror franchise before he passed away. 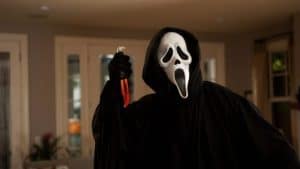 Although SpyGlass is yet to confirm if this is actually true, Bloody Disgusting have been extremely credible with their Horror scoops.

Fun Fact, Wes Craven passed on directing Scream… Twice! So it came as a surprise when he directed four movies, and although some agree that Scream Three is far from perfect, the franchise seems stable. But are we continuing the famous story of Sidney Prescott or do we start from Scratch?  VH1’s Scream Resurrection (series) may give the executives at SpyGlass an interesting idea. Although Scream Resurrection was a hot mess the series focused on a different town with different characters, unfortunately there was absolutely no character development, if done correctly a new generation will experience Scream. If Roger L. Jackson returns to voice Ghostface I’m sold.

This is actually extremely important, in 1996 they didn’t have iPads or Instagram, everyone was a suspect, the cops/schools weren’t prepared or advanced for violence to come this way. But these day’s once everyone has Snapchat they can easily be checked on! This is a huge problem for the Scream franchise, so what can they do? Although they could base it in the 90’s we also don’t want to erase previous movies however a prequel to scream sounds interesting.

what do you think of this News?