Marvel’s highly anticipated Falcon and The Winter Soldier series is in production and the fans can’t keep calm. To be premiered on Disney+ in 2020, the series has garnered a lot of spotlight before its release. The latest update on the prowess of the Marvel fan base came from an unexpected place; a coffee shop. Reportedly, a coffee shop in Senoia, Georgia has been swarmed in by the public after Winter Soldier aka Sebastian Stan was spotted shooting there. Great news for the coffee shop, right? However, things got out of hand real quick and now the coffee shop has appealed for a little privacy. 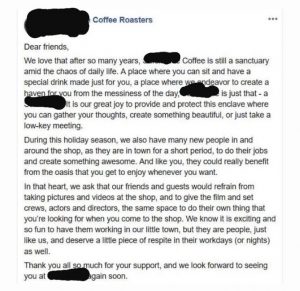 A blacked out name and a letter to the fans from a “they-know-which” shop has caused a lot of ruckus on social media. The paparazzi has been busy clicking the pictures of both Stan and Anthony Mackie aka Falcon, and when the pictures hit the social media, the public went crazy. However, the letter is just a sincere request rather than being a rant on the Marvel fan base. The owners have asked the fans to refrain from taking pictures and videos at the shop. They have also asked the people to give some space to the crew members including the actors.

The coffee shop seems to be acknowledging the attention it has been getting from the Marvel Cinematic Universe. How much hustle it may cost you, but it is still MCU, right? Moreover, the owners also want the shooting of Falcon and The Winter Soldier to continue smoothly. However, Marvel fans are not really known for their restraint and we think this letter might not be that effective. 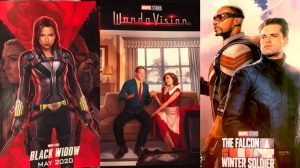 The Falcon and The Winter Soldier stars Stan and Mackie in lead along with Emily VanCamp as SHIELD agent Sharon Carter as well as Daniel Bruhl as the notorious Baron Zemo. Marvel Studios isn’t resting with this. It has numerous other projects already scheduled for its calendar. The upcoming ones include Black Widow on May 1, 2020, The Eternals on November 6, 2020, Legend Shang-Chi and the Legend of the Ten Rings on February 12, 2021, WandaVision in Spring 2021, Loki in Spring 2021, Doctor Strange in the Multiverse of Madness on May 7, 2021, Spider-Man 3 on July 16, 2021, What If…? in Summer 2021, Hawkeye in Fall 2021, Thor: Love and Thunder on November 5, 2021, and Black Panther 2 on May 6, 2022.