After almost 20 years of the beginning of the series, some Marvel fans are now campaigning for the fourth film of Sam Raimi’s Spider-Man series, even hoping to have #MakeRaimiSpiderMan4 trending on Twitter. Hoping to get Raimi’s director’s cut of Spider-Man 3 release, paired with a new account, the campaigns join the huge list of “#ReleaseThe” campaigns after the success of Zack Snyder’s Justice League, which premiered on HBO Max. Others also include a campaign to have Joel Schumacher’s director cut of Batman Forever released, alongside a fan campaign to have the director’s cut of the 2005 film Robots released from Blue Sky Studios.

Since its cancellation, there have been intermittent support for Raimi’s film.  After Spider-Man 3 hit the theaters in 2007, Sony quickly went on developing Spider-Man 4 in 2008, for its release in 2011, with rumors even stating plans for Spider-Man 5 (possibly another trilogy) were also in the talks (however, those plans have been refuted by Raimi since). James Vanderbilt (writer of Zodiac) was penning the script, with Kirsten Dunst, Tobey Maguire, and the other trilogy actors returning to reprise their roles – accompanied by some new additions, as well. 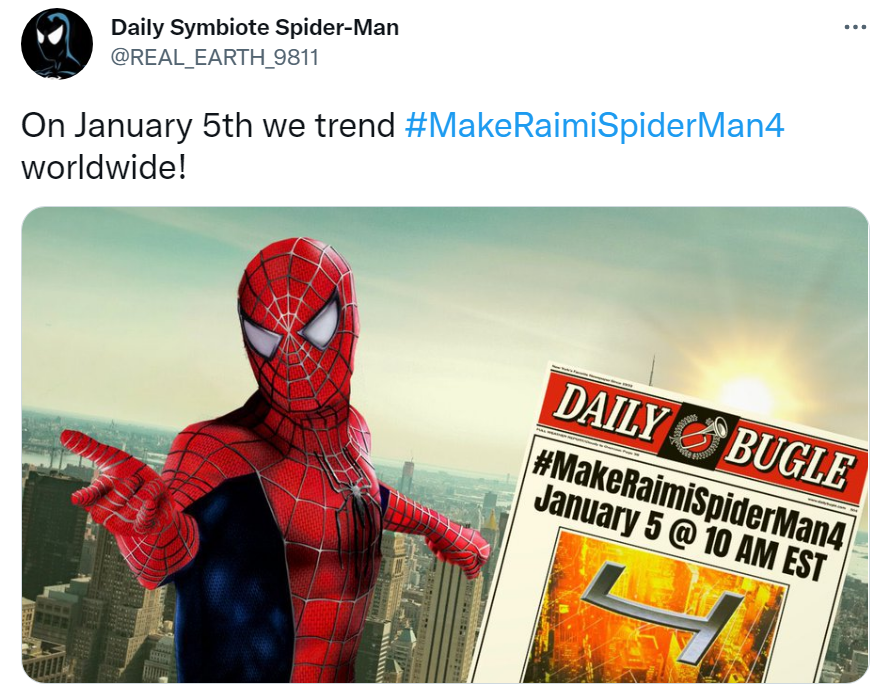 The characters that were rumored for Raimi’s future Spider-Man films have been used in other films ever since, with The Lizard appearing in The Amazing Spider-Man, while The Vulture and Mysterio making an appearance in Tom Holland’s Spider-Man films. Obviously, many except Mysterio, have all seen each other, so if Raimi had plans to have The Lizard, Tobey Maguire’s Spider-Man would probably remember meeting one before.

“I think about it all the time,” Raimi said in a 2019 interview. “It’s hard not to, because each summer another Spider-Man film comes out! So when you have an unborn one, you can’t help but think what might have been. But I try to focus on what will be, and not look into the past.”

“When they moved on from there [Sam Raimi’s Spider-Man trilogy], it was heartbreaking,” star J.K. Simmons, who reprised his role as J. Jonah Jameson, in the last few Jon Watts/Tom Holland movies, said last year. “I thought ‘Oh well, that was fun,’ and I was glad I had the opportunity. When they came back a couple of years ago and said they wanted to revive that gasbag of a character, I was thrilled. It was just about adapting him to 2020 and really to me, he’s the same blowhard, just instead of running a newspaper he runs a media empire.”