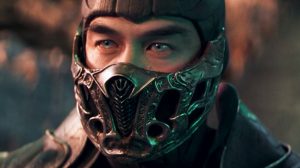 The very highly anticipated live-action Mortal Kombat movie is out in theaters and on HBO Max, and it seems like it deserves a watch.  As the viewers are already disappointed with previous attempts to bring the bloody thrills of the revered video game series to life, this latest version makes sure to include new characters into the fray, keeping the fights brutal and glory. They have also included plenty of easter eggs for the fans to enhance the watching experience.

Some of these easter eggs consist of nods to the characters who weren’t included in the film and tributes to the developers who made the game series, and for a casual viewer, this feels like it was made by fans for the fans. There is a lot of stuff going on in this movie. So the average user doesn’t need to be overwhelmed because we are going to give a thorough understanding of the references, callbacks, and other small details in order to help make your viewing experience a flawless victory.

Here are the easter eggs:

Characters from the game that meets the gamers eye 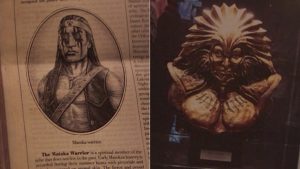 The film includes some series standbys like Liu Kang and Sonya Blade to more unknown fighters like Nitara and Reiko, making it more accurate with a wide array of characters from the game. That’s only the nick of the iceberg as you are going to see there are more characters who are widely referenced throughout the film even those who aren’t on the screen.

As the film begins, we see Sonya is showing Cole Young her well-researched topic which is the Mortal Kombat tournament and Outworld. One of the documents consists of a page from a book that is an illustration of a Native American man “Matoka Warrior”. However, the person in the illustration looks exactly like Nightwolf, who is introduced in Mortal Kobat 3, and he belongs to the Matoka tribe. 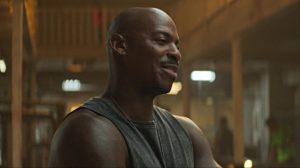 Mortal Kombat not only acknowledges the characters who do not appear on the screen but even pushes things to the next level making sure to refer to the creators of the game series in the first place. The first glimpse of this is when Jax introduces himself to Cole. Jax mentions a past fight where Cole managed to take the belt away from a fighter named “Eddie Tobias,” a subtle nod to “Mortal Kombat” co-creators Ed Boon and John Tobias, who was the main character designer for the franchise until “Mortal Kombat 4.” Tobias is the one who is responsible for all the roles in the games and he also shares some behind the scenes and exciting fun facts for his fans on his Twitter handle.

The clues lie in the colors 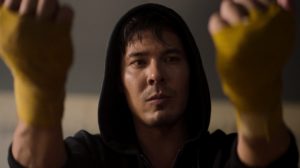 The colors of the outfits worn by the characters play a central role in the development of the game series. It would only make logical sense to follow this trend in the movie too. Like in the games we see much of the ninja characters like Scorpion, Sub-Zero, and Rain were different from each other visually thanks to the primary colors used in their design.

In the very first introduction of Cole Young, we see him prepping his hands for an MMA fight wrapping them yellow tape. This is a subtle reference to the Scorpion and the clan, Shirai Ryu, whose main color is yellow. It is a subtle hint the Cole joins the clan in the future.

Sonya’s wall of research and its references 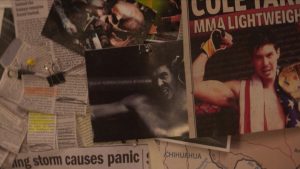 Some of you may think this might already be covered but you might be wrong. There is one obscured headline that reads “—ning storm causes panic.” this might mean “Lightning storm causes panic.” Considering it’s on Sonya’s wall of research, that could be a reference to Lord Raiden (Tadanobu Asano), who arrives in Earthrealm via an intense series of lightning strikes on multiple occasions. The headline could be describing what Raiden’s strikes looked like to normal Earth-dwellers who were unaware that they were witnessing the approach of the God of Thunder.