Spiderman has been one of the mainstay characters of the Marvel Universe, and over the years, the powers granted to Spidey have varied and changed. After an accident in the lab and the subsequent bite by the radioactive spider, Peter Parker developed such spider-like abilities as sticking to walls, speed and the proportional strength of a spider. Over the years, Parker also had other abilities like four extra arms and legs so he would look like the human version of a spider, organic web shooters in place of the mechanical homemade shooters he used to have and also the self healing ability that helped him survive after being viciously wounded during the 2005 events of “The Other”. There is also the spidey sense that lets Spiderman sense attacks and dangers around him, but they have also been lost and regained in these years leaving the wall crawler vulnerable to ambushes. Peter Parker: The Spectacular Spiderman #306 has added a brand new power to this already impressive skill set by granting Peter with some supernatural abilities. From what we can tell, these have allowed Spidey to turn the amp on all the regular powers that he has, and revisit in live action all the memories from his past so now the Spiderman has total recall. 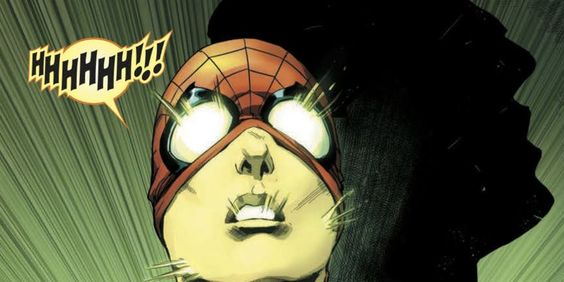 It so happened in the issue #300 that the Vedomi are called upon by the Tinkerer. The Vedomi are an alien species whose only mission is to travel to planets to rescue the artificial
intelligence on the planet and then kill off everyone else. In order to stop them, Spiderman teams up with his sister Teresa and J.Jonah Jameson. The trio then travel to an alternate past to get to a machine that will help defeat the Vedomi. The alternate timeline is called the Spiderpoint universe and has a Peter Parker who gave up on being Spiderman. Also, his wife Gwen Stacy is a member of the Resistance, Norman Osborne went on to be the President of the United States, his father Norman was able to reinvent his image and made his green goblin serum into a health supplement and Jonah had retired from the newspaper Daily Bugle.

When the trio return from this mind boggling reality, they find that a huge Vedomi ship is circling over the New York City and one of their targets in the crosshairs is H.E.R.B.I.E, the friendly robotic ally to the Fantastic Four. It is astounding to see that Spiderman looks out for the little H.E.R.B.I.E and prevents it from being kidnapped, even though there are thousands of New Yorkers whose lives are in peril. Spiderman then meets Daredevil, who takes him and his Amazing Friends to the lower level of the Baxter Building where all the heroes of the world have gathered to lead a final push against the Vedomi before they destroy the world. This is where Spidey tells all of them of their adventure, and tells them of the device they brought back. The plan to fool the Vedomi into thinking that the planet was empty, which they could do through a small capsule created by Vedomi scouts as a fail safe to make the prime directive believe there was no one to kill. However, Black Panther informs all the
assembled heroes that using the capsule will only work if it is introduced through a living host’s consciousness and then change the programming inside. Because he looks at the Vedomi as his own responsibility, Spiderman volunteers and lets the gross green liquid devour him and go through to his consciousness. This also turns Spiderman into a machine, letting him see all memories from the past whenever he wants. Flashbacks follow, but Spiderman is soon seen trying to mold the capsule his way. We see a glimpse of his abilities when he jumps from the Baxter building straight to the Vedomi ship which should be in all approximation about a hundred miles over the city of New York. Before he leaves, a few words are shared between Parker and his new found sister Theresa, and while the panels
are blurred, it is later revealed that Peter believed in those moments that he was not going to come back from the confrontation with the Vedomi. He told Theresa to go find Aunt May and he knew that they were both going to love each other. While we do not expect the webbed superhero to die during the story, it remains to be seen how it plays out in the sense of how much time Spiderman get to keep these uber cool powers. Of course, one major side effect of this change is that he is walking around with green muck all over his body and suit, so it is guaranteed not to be long.