One of the premises of Marvel Universe is that it had a dark shadow cast over in Spider-Man: Spider’s Shadow and thanks to one of the most twisted version of Venom symbiote yet. The time when Peter embraced the living darkness, he gave his own symbiote suit a sense of purpose that is never really had before.
That drove Peter to become a cold- blooded killer which was maybe a good start but then with Reed Richards as the latest host there is so much more that the symbiote can do.
But the great news is that Spider- Man is no way going to sit and watch his world burn without giving a tough fight and with the Human Torch to help him, they are just reminding all of us that why they really are one of Marvel’s most effective crime-fighting duos.

There is no surprise that Peter Parker, Johnny Storm and Mary Jane Watson have all made their way beyond the barrier of living darkness and inside the Baxter Building where the Venom symbiote had not just taken control of Reed Richards but went a step further  and used his incredible brains to create its own army.
The squad knew they clearly do mot stand a chance face- to- face and thus Johnny and M.J. lead the Venomized Reed Richards away from its stronghold to buy Peter enough time to find a solution in Spider-Man: Spider’s Shadow # 5 by Matt Hollingsworth, Chip Zdarsky, Pasqual Ferry and  VC’s Joe Sabino.

Amidst the numerous tech- geek things  spread across the lab, Peter discovers a simple device that clicks him a great idea.
And he doesn’t need Johnny Storm’s help tp pull it off as he has to offer himself back to the symbiote willingly. 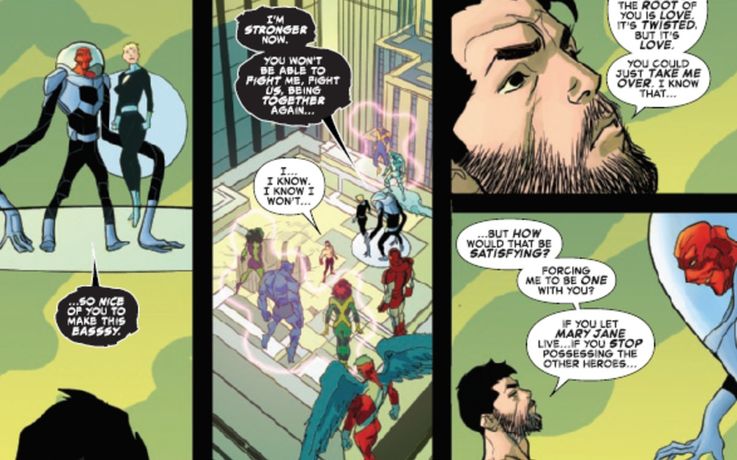 The heroes have grouped up on the roof of the Baxter Building where Peter Parker tells the symbiote that he will take it back as its host if it promises to let the other heroes and Mary Jane go without further harm.
As of now, the symbiote has grown more and more obsessed with Peter and wants to make its bond permanent with itself as far as this timeline is concerned.

Further, Peter gives an intense description of the symbiote to itself saying that the symbiote is nothing but a twisted sort of love at its core. No matter how grotesque their relationship might be, Peter isn’t wrong in his assessment, which is exactly why it is so easy to get the symbiote to walk right into his trap.

After all these years since the interstellar accident that gave the Fantastic Four their amazing powers, Reed Richards worked day in and out without stopping to find the cure for Ben Grimm’s stone-faced facade, even giving him an image inducer that allowed the Thing to appear human. 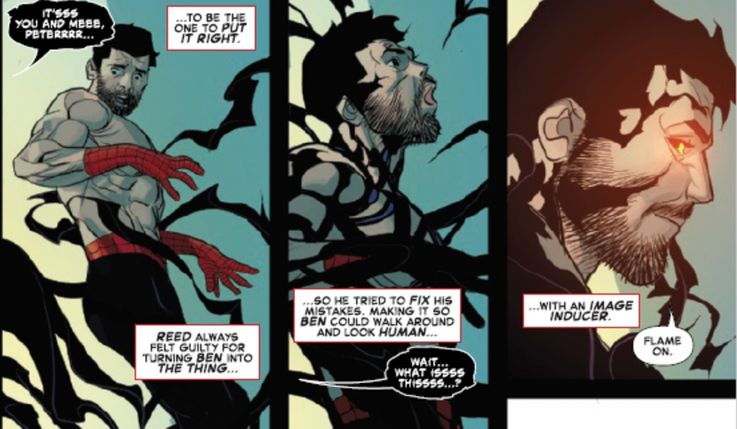 Out of all the classic team- up moments that Spider- Man and the Human Torch have been part of over all these years, this specific one proves to be the most shocking one yet.
And with such little planning, these two heroes could turn an otherwise innocuous device into the means to take their world back from the ever-expanding reach of the Venom symbiote.

The Baxter Building is pretty scary in itself and makes it worse for the wear but that is a far cry from the relief that comes with being free from living in the darkness which our heroes know of.
Spider- Man and Human Torch are working together in the new Fantastic Four on this world and that there’s nothing that they can’t handle together.