Marvel Studios’ first ever animated series What If…? Shows new and scary alternate realities in the Marvel Cinematic Universe but one particular reality for Spider-Man could probably take things too far.
The all new series What If..? is set to explore the brand new born multiverse that spawns out of the finale of Loki series aired on Disney+. The series will be showcasing many of the characters seen in the Marvel Cinematic Universe with changes to their stories like Peggy Carter getting the Super Soldier Serum instead of Steve Rogers aka the First Avenger; Captain America.

However, one of the most interesting interpretations set to make his appearance is Zombie Hunter Spider-Man. This version of the Spider-Man wears Doctor Strange’s Cloak of Levitation and is probably not so neighborhood friendly and more importantly he survives in a world overrun by the undead. But the character’s backdrop also calls back to a version of Spider-Man that may be too disgusting to ever appear in the Disney’s newest property.

One of the very recent abilities that the Spider-Man has gained and even lost is the power to shoot organic webbing. And this came to the comics in the early 2000s and was made famous thanks to Tobey Maguire’s Spider-Man film series. Since then, Peter Parker has gone back to mechanical web-shooters. There are also rumors that the famous organic webbing could return in Spider-Man: No Way Home, with Tobey Maguire possibly reprising his role as the Spider-Man.

That just brings us back to the question of how many alternative versions of the character could appear and how they can turn the concept of Spider-Man on its head. Peter Parker from the Marvel Zombies timeline is one of the best examples of this that helps to connect the distances between the Zombie Hunter Spider-Man and other alternate creations. 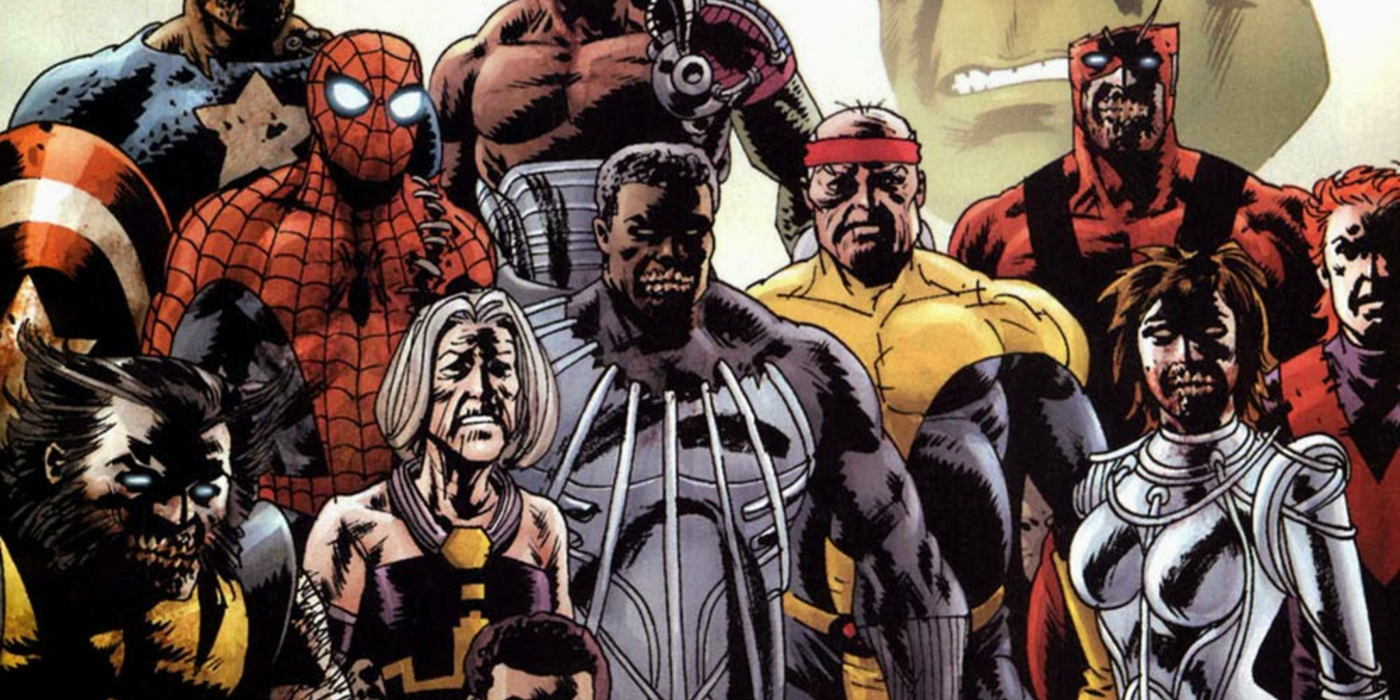 Marvel Zombies Return is actually a mini- series written by some great writers such as Jonathan Maberry, Fred Van Lente, David Wellington and Seth Grahame- Smith and some well known artists like Wellington Alves, Richard Elson, Andrea Mutti,Jason Shawn Alexander and Nuck Dragotta.
The series interestingly follows a reality where most of the Marvel Universe falls a victim to a zombie virus that allows its heroes and villains to retain their consciousness but also gives them an uncontrollable hunger for flesh and blood.

And sadly for all the fans, our neighborhood friendly Spider-Man aka Peter Parker is too affected in a particularly disgusting way, shown when he tries to fire off a web- line. Instead of his standard webbing, the hero’s veins and even the arteries shoot out in their places.
While the entire series is a dark look at the universe, Spider- Man’s unfortunate evolution in webbing makes his change into a zombie the darkest in the entire series and also gives a huge potential addition to the MCU. While Zombie Spider- Man’s fate is terrible, there are other weirdly gross Spider-Men that also exist in the other Marvel timelines. 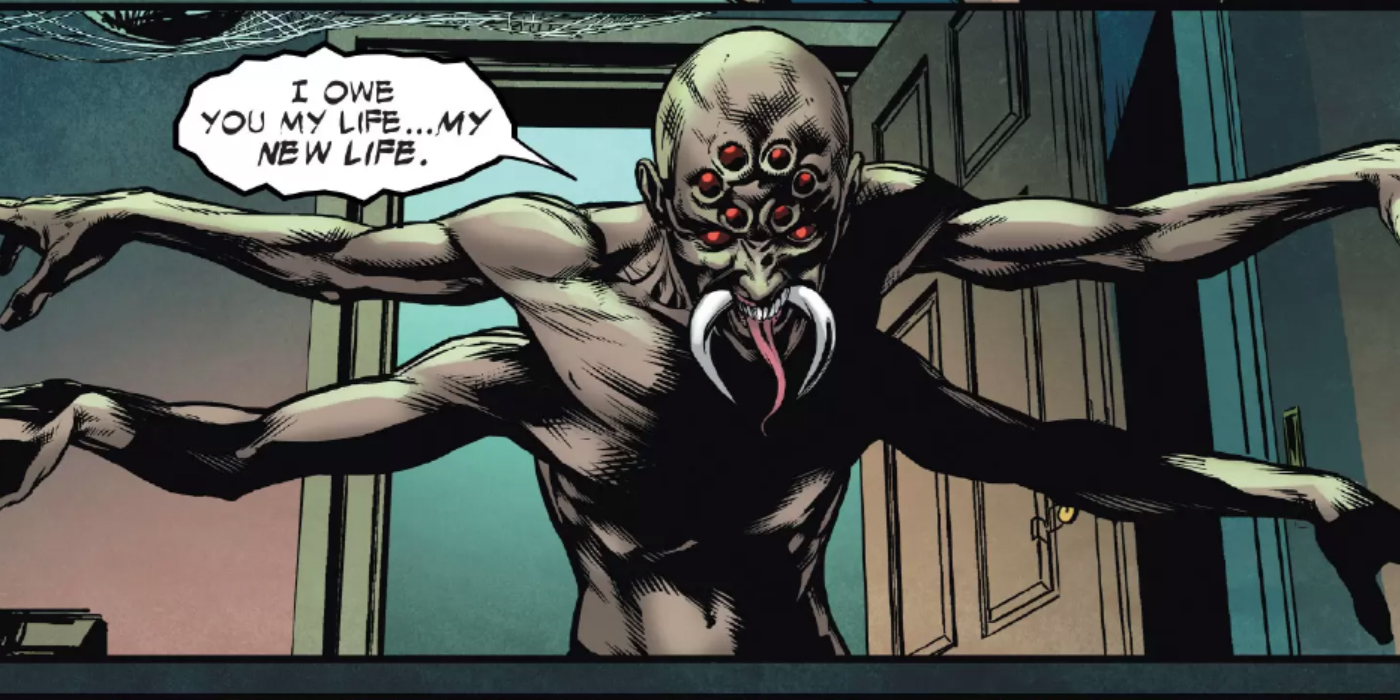 Patton Parnel is an alternate reality version of Spider- Man who also appears in Edge of Spider- verse # 4 by Clay McLeod Chapman and even Elia  Bonetti. And unlike the other Spider- Men, this version is bitten by a radioactive spider that actually turns him into a humanoid spider who is hungry for human flesh. Due to all the psychotic tendencies Patton gained after being abused by his uncle, the monstrous form was even more heartless, killing everyone from his uncle to innocent animals and even the children.

Interestingly, yet another version of Peter Parker appears in Spider- Geddon # 3 by Dan Slott, Carlo Barberi, Christos N. Gage and Todd Nauck called Spiders- Man. In this timeline, Peter is devoured by a nest of radioactive spiders who take on his consciousness and form. While they operate as heroes, they still crave for the human flesh and blood. These skin creeping spider- tales act as the perfect monster or even scary stories for What If…?, but it is possible for Disney to ever adopt these dark tales?

But as of now, Peter Parker is still a teenager in the MCU and Disney+ targeting What If…? to a slightly younger demographic and it seems safe to assume that these disgusting versions of Spider- Man might never be introduced by Marvel Cinematic Universe be it in their series or in their movies.
That being mentioned, with such reveal of a reality with zombies, the outcome of the episode could dictate how dark the franchise is willing to go to please the fans.
And on the other hand, the Marvel Studios has already warned the fans to expect the unexpected. Introducing these stories could possibly benefit a show like What If…? as a different series considering it is not scared to explore even the darkest corners of the Marvel Universe.