Sony has recently released a new spot for Spiderman: Far From Home, claiming it as Peter Parker’s biggest journey so far. 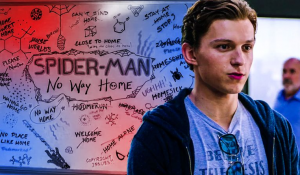 A new promo revealed by the makers depicts that Spiderman: No Way Home will be Peter Parker’s biggest journey so far. Tom Holland and Director Jon Watts are returning for the third time for the upcoming Sony Pictures Entertainment and Marvel Studios collaboration. Not much is revealed since the marketing and promotional events have still not kicked off yet. But at the same time, fans might revisit past films in the new upcoming one as proposed by the new clip.

Marvel Studios introduced their in-house version of Spiderman in Captain America: Civil War instead of debuting in a new solo film. A year later, Peter Parker got his standalone in Spiderman: Homecoming. Following the same, Spiderman also joined the mega war against Thanos in Avengers: Infinity War and Endgame. The Infinity Saga then continued with Spiderman: Far From Home, an epilogue to the main story. With that said, the young superhero is now ready to embark on a new mission with Spiderman: No Way Home. While it is still uncertain who will be the villain this time, the franchise is already hyping the upcoming movie up about five months before its official release.

The new promo has been posted on Sony Pictures Entertainment’s YouTube channel. It is enticing the fan base to revisit both the early movies before the new one drops. Towards the end of the promo, it claims that “Spiderman’s biggest journey is yet to come.” Watch the full video here.

The shoot of Spiderman: No Way Home got finished earlier this year, but still, there is no official movement or promotional events ongoing as of now. That is perhaps why the fans are eagerly waiting to release its official trailer that might offer new clues and events about the threequel. While Sony is using the upcoming film to market the predecessors, it is expected that Spiderman: No Way Home might bring a live-action to the SpiderVerse narrative.

Considering what happened in the final episode of Loki, the concept of Multiverse is now more feasible than ever before. The death of He Who Remains led to creating a chain of Multiverses whose branches seem to be overlapping each other. This might show how the previous versions of web-superhero can coincide with its new version. While we are reading this sentence, some reshoots are currently ongoing for Spiderman: No Way Home post which a new trailer can be expected.