In the Darth Vader series by Marvel Comics, we have been getting a rare glimpse into the emotional side of Palpatine’s Sith apprentice. In the trilogy of films, he is calculating and cold, but we are learning that pieces of Anakin Skywalker still exist beneath the mask.

Issue #23 reveals this exploration of the villain, stating that the villain is the most focused when heartbroken. He uses his emotions as motivation and finally achieves the dream every Sith Lord had wanted to achieve. He manages to breach the membrane of the Force, opening gates between life and death. However, his success is short-lived, thanks to a betrayal by someone on his side.

We initially thought that Vader was building his castle of Mustafar as a fortress of solitude as the planet, like no other location, channelled the dark side of the Force. This may have been possible as it was the centre of Vader’s rage, as that was where the former Jedi was left to die by Obi-Wan Kenobi. Sith Lord Momin constructed the palace and we find out that it was more than a place to just meditate.

By harnessing the energy of the planet and thanks to some help by Momin, Vader could actually break the wall of the afterlife and bring Padme Amidala back to life. Their attempts start off with a lot of failures, but on the ninth try, Momin nails the design we saw in Rogue One, which feels right for him and Vader. Palpatine’s General could feel the Force inside him, with the castle opening like a tuning fork and using Momin’s guidance, Vader opens the rift he had desperately wanted to.

This quest for immortality is what lured him over to Palpatine’s side as he wanted to harness the force so that he and Padme could live forever. Earlier, he had been lured by the Emperor in exchange for Padme’s resurrection but now it seems like he has stopped buying into Emperor’s folly and this is what has driven Vader to achieve the goal of all Sith Lords. 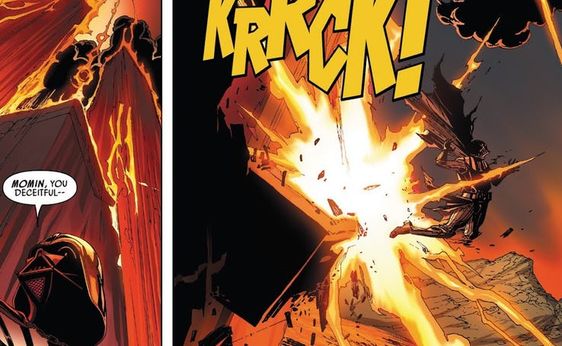 However, when Vader opens the rift, he’s betrayed by Momin who plunges him into the fiery depths of Mustafar, leaving the rift for him to explore and exploit. We know that Vader will rise from the flames and take Momin out but what remains to be seen is that after toying with Vader and teasing a reunion with Padme, how exactly will Vader seek revenge from the Emperor.