Boba Fett may have become a fan-favorite character in the original Star Wars trilogy, but it was the prequels that showed how he turned from a boy into a killer. Now, the actor himself has explained why Boba Fett’s most iconic images isn’t actually one of the most disgusting, too.

As fans know, the true origins of the infamous bounty hunter are revealed in Star Wars: Episode 2 – Attack of The Clones. When Obi-Wan Kenobi meets Jango Fett, he learns that not only is the Mandalorian working with the ‘Darths,’ but is raising one unmodified Kamino Clone as his own son, Boba. A son who will later witness his father beheaded, before claiming his helmet as his own–presumably with Jango’s severed head still in it. It’s a disturbing moment that may never be seen the same… now that the child actor has clarified Jango’s actual head isn’t part of the scene at all.

There is much about the Fett family that fans still get wrong, leaving The Clone Wars to fix Jango’s story in Star Wars canon. But it’s the passing of the baton from father to son in the form of his Mandalorian helmet that is hardest to forget. Obi-Wan is the first Jedi to face Jango in Attack of The Clones, but the honor of slaying him goes to Mace Windu. Facing him in the gladiator arena of Geonosis, Mace finds the seam in his lightsaber-resistant armor, and takes off his head with a single swipe. Leaving Boba Fett to honr his father’s corpse. Both pieces of it.

Fans may debate the morality of Mace Windu and the Jedi abandoning a child after killing his father (although the Jedi clearly didn’t consider Clones people, anyway). But it’s clear that a happy ending isn’t what George Lucas is after. He delivers the moment that set Boba Fett on his own path into the future films, TV shows, books, and stories fans know and love. No fan can forget the iconic shot of Boba crouching down in the dirt, picking up his father’s helmet, and silently swearing to follow his example. And no fan can forget the first time they realized that Jango’s head must still be inside, making one of the best shots of the Star Wars prequels one of the creepiest, when you stop and think about it.

Leave it to the Daniel Logan, the actor who actually played the young Boba Fett, to end that conflict once and for all. Even better, point fans to the on-screen evidence that they almost certainly miss upon each rewatch. When a host of the Hearts of Kyber Podcast shared the shot in question on Twitter, alongside a photo of George Lucas demonstrating the pose–asking ‘who did it better?’–Logan replied to offer some context. First, confirming that he followed Lucas’s direction to kneel with the helmet, until the one take in which he squatted wound up being used in the film. And second, to address the popular reading that Boba is holding his father’s severed head (shudder):

You can see the shadow of Jango’s head falling out just after Mace “removes” it from his body and the helmet goes flying. So, no, no head in it when #BobaFett picks up the helmet.

The explanation that Jango’s head “falls out” of the helmet may sound like the kind of dismissal or ‘magic wand’ excuse one might use to disguise a grisly image (even one that turned out far more gruesome in the final cut than was ever intended). But the film itself does back up Logan’s explanation, even if viewers are almost guaranteed to miss it completely. Not that fans should beat themselves up too badly, since Lucas probably hoped audiences would never stop to think too much about this scene. Especially not after Mace Windu charged at Jango, effortlessly deflecting his shots and decapitating him instead (rather than using the Force, for instance). 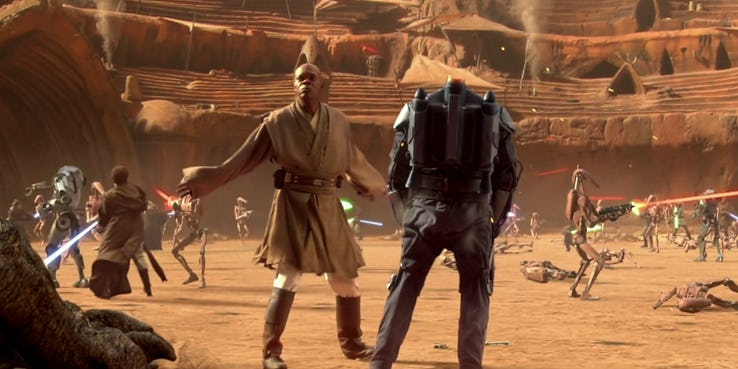 Questions of ethics aside, it makes sense that the death, like the status of the corpse, should be somewhat unclear. Since Star Wars movies are intended for children as well as adults, the ways to communicate that a man’s head has been removed and tossed free of his helmet are, admittedly, limited. But upon close inspection of the shot in which Jango’s helmet goes tumbling to the ground (before returning to show his body crumple before Mace) a shadow does fly out of frame on the helmet’s trajectory. Which means Logan’s explanation that young Boba was cradling his father’s helmet, and not his head, can be taken as canon from here on out. But that change does more than just soften the horror of the scene–it actually makes it way better once fans stop to think about it…

As morbid as it may be, Boba’s moment does make sense. Having watched his father cut down, approaching his body and clutching his head would be a perfectly normal response. Of course, the head not actually being attached to the body is a bit… unusual, but the line between the Mando warrior and their iconic helmet has always been somewhat blurred. Not a people known for their sentimentality, the previous reading–Boba honoring his father, pressing his slain head and helm to his own forehead, before stripping the armor–would still work for most fans.

Of course, the Star Wars canon has already explained how Boba Fett’s armor isn’t actually his father’s, and he actually destroyed Jango Fett’s iconic helmet in a booby trap. But staying focused on this scene for Boba, knowing that Jango’s body and head are visible in the dirt makes Boba’s actions mean something different. He doesn’t go to his father’s body, or gaze at his head… he is drawn to the Mandalorian helmet his father wore in combat, pressing it to his head as if it were the legacy he is connecting with, and not just Jango.

It may be a far less sentimental moment knowing that Jango Fett’s helmet is completely empty, but it might also be more in keeping with the Mando way. Fans have always seen this moment as Boba mourning his father: a normal, if straightforward scene. Now, fans will need to decide how to interpret the scene differently. Was this the moment Boba pledged to be like the man his father was when donning the armor? Was this Boba’s commitment to the Mandalorian way? Or is it a young boy unable to process his grief, and drawn to a helmet that will close him off the world?

No matter which interpretation you may think most believable, or rich in story potential, one thing is clear: fans will never again have to watch the Boba Fett scene in Star Wars: Episode 2 and mentally picture Jango’s head slipping loose in gorgeous silhouette.