A new stormtrooper armor has been revealed in Star Wars: The Bad Batch. With that said, many fans could identify this armor similar to the concept art design by Ralph McQuarrie. 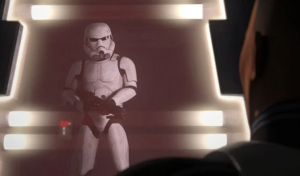 The Empire is now transforming rapidly from clonetroopers to stormtroopers in Star Wars: The Bad Batch. The first batch of TK stormtroopers has been introduced in “War-Mantle”. While the uniform does match with the original stormtrooper uniform from the trilogy, it seems like the inspiration behind the armor has been taken from Ralph McQuarrie’s concept art for Star Wars: A New Hope. This honors his work and dedication for the franchise. Considering the fact that The Bad Batch takes place in a timeline that is two decades old, this new choice of design is perhaps a logical move by the makers.

The first glimpse of Echo, Hunter, and Tech when they scout the Empire’s secret in “War-Mantle” is based on the rescuing operation of Clone Captain Gregor. In that scene, Echo figures out that there are some clonetroopers with their new updated armors. However, the truth gets revealed later.

It was the Empire who got their clonetroopers replaced with human recruits. Further, Gregor elaborates this by saying “These recruits come from all over the galaxy. They swear loyalty to the Empire. They’re not as skilled, but there’s an endless supply of ’em.” Thus, the Empire wishes to remain in the power with its new “TK” troopers. They will now focus on their quantity rather than the quality.

If you observe closely, the stormtrooper’s armor design is somewhat similar to that of McQuarrie’s concept art. His designs and custom arts were so interesting that they’d still help the makers take an inspiration for their entire series today. Ralph McQuarrie’s concept art in Star Wars: A Tribute to a Master was released in parts by ‘starwars.com’. In the documentary, George Lucas echoes that Ralph’s influence on the series has been incalculable. To this, Lucas further added that McQuarrie’s designs “were accurate in terms of what Lucas wanted.”

Later, in an interview, Ralph McQuarrie said that “in the end for the most part some of those paintings were virtually rendered intact on to the screen in Star Wars.” This depicts that he did not expected his concepts to get used as a final product for the franchise. Whole the stormtrooper’s designs are highly similar to Ralph’s design, they have some minor changes here and there.

Overall, the way Star Wars makers have used McQuarrie’s design is perhaps a loving tribute to the person who is responsible for making the feel and vibe of the franchise special. The design of stormtroopers also plays an essential role in depicting the passage of time in the film. While the first interaction has already taken place with the new stormtroopers, it is highly expected that Star Wars: The Bad Batch will take a major influence from Ralph’s design in the future.

The new episodes of Star Wars: The Bad Batch are now streaming every Friday on Disney+.