Star Wars: The Rise of the Skywalker had a lot of surprises for the fans. The film ended the long-running saga of films after nine main entries throughout the last four decades. Because of the hype that the movie already had in the Star Wars series, there were a lot of questions about how the filmmakers would end the vast narrative. Fans also pondered upon the fact that how much of the sequel trilogy would dwell on the past. However, the movie took an unexpected turn when a major character made a shocking return! 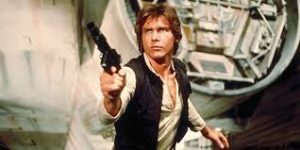 During the course of the movie, Kylo Ren experiences doubts in the Dark Side after Rey spares his life in their final duel. Ren sees a vision of his father Han Solo which helps him back into the Light. Harrison Ford’s cameo was pivotal to the film’s narrative but the filmmakers reveal that it took some work to convince Ford for his return. Given Ford’s past relations with the character of Han Solo, the actor had his wish granted of the character being killed in Star Wars: The Force Awakens.

While fans might assume, Han Solo’s return is an appearance of the Force ghost, writer Chris Terrio confirmed that the character is a mere figment of Kylo Ren’s imagination. He later went on to clarify that Ren is still haunted by the fact that he killed his own father. JJ Abrams has said that the crew had a meeting with Ford and the actor was incredibly thoughtful before taking a step.

Star Wars: The Rise of Skywalker is playing in the theaters.