Jonathan’s new love interest dropped a reference that a new villain from The Flash could be included in Superman & Lois season 2. 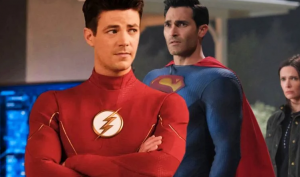 In episode 14 of Superman & Lois season 1, the makers hinted that they might include a villain from The Flash in season 2. The crossovers of Arrowverse characters was limited in Superman & Lois season 1. They were only limited to Man of Steel’s corner, but soon, it might going to change. There induces more possibility after Tegan Wickham, the love interest of Jonathan, sets ups a Central City reference in episode 14.

The only biggest Arrowverse crossover that got used so far was the appearance of John Diggle (David Ramsay) from Arrow during the battle scene with General Zod-possessed Superman. However, “Crisis on Infinite Earth” made more interactions between several shows in the Arrowverse.  Thus, while Superman has really not interacted with any character from the Central City or Star City in Superman & Lois season 1, there ignites a possibility and space for the inclusion whenever the plot will require a crossover. Superman could run anytime into the Arrowverse to fight a hero or a villain, whether it is from The Flash, Black Lightning, Legends of Tomorrow, Supergirl, or Batwoman.

Superman & Lois season 1 has teased an enemy from The Flash who is crossing paths with the Kents in Smallville. Episode 14, “The Eradicator”, reflects and drives a story about Tegan’s past and explains how the character and her mother moved to Smallville right after her father got arrested and sent to a prison in Central City. While there is a possibility that her father was just another ordinary criminal, the mention of Central City (specifically) suggests that there could be a lot more than just an ordinary story. This is obvious because Central City is filled with Meta Humans of the Arrowverse ever since the particle acceleration explosion happened. As a result, Tegan’s father might have got transformed into a Meta villain who later got chased by Barry and his Team Flash.

There is also a possibility that Tegan’s father was captured off-screen, which will allow Superman & Lois season 2 to introduce a new Meta-Human villain. Alternatively, there exists another possibility that Tegan’s father is an established Meta Villain from The Flash, though it could be anyone. In the last couple of years, in between The Flash season 1 and 7, Barry Allen and the team Flash have fought dozens of Meta Villains from the Central City. With that said, as far as Tegan’s timeline is concerned, there are a few characters who could be that villain. For an instance, it could be ‘The Hotness’ from The Flash season 4.

Regardless of who could be this villain, this character will go down looking for his daughter in Superman & Lois season 2. If that is going to happen, Jonathan will get caught in the crosshairs that will force Superman to defeat him. There is one parallel possibility that this scenario of Tegan is meant to set up a plot for The Flash season 8. With that said, The Flash is expected to have five crossovers at the beginning of season 8. A team-up with Superman could be just one of the events that are going to take place in it.