The hit AMC series based on the best-selling comic book saga by Robert Kirkman has managed to wow a lot of fans with its take on the zombie apocalypse and how human society would rebuild itself after the proverbial end of days.

There are still many facts about the show we do not know. Here are some BTS Details that might intrigue you.

Doctor Edwin Jenner Is Named after World’s Most Famous Virologist 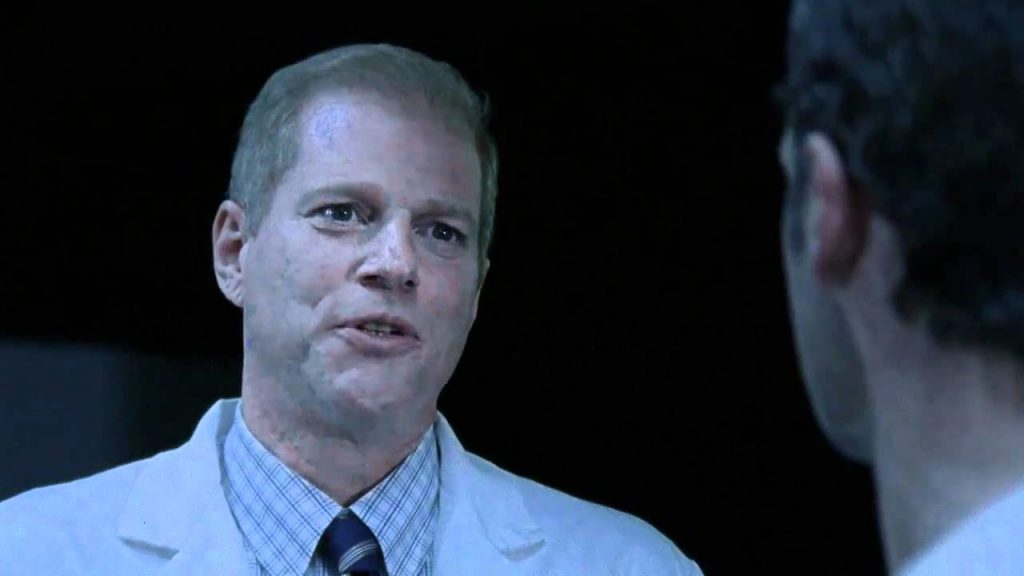 Doctor Edwin Jenner appeared in only one episode of The Walking Dead Series. But his role was crucial in understanding the depth and intensity of the viral outbreak.

One of the last CDC survivors that were sent to research and find a cure for the virus, Edwin Jenner was holed up in a Government Bunker, waiting to die.

In his final moments, Doctor Jenner revealed that the virus has infected everyone, including the living. The name Edwin Jenner must ring a bell among the science enthusiasts.

He is named after the renowned virologist and medical researcher Doctor Edward Jenner. Edward Jenner was the one who came up with the Smallpox Vaccine.

Unfortunately, the show’s Doctor Jenner could not come up with a vaccine for the virus of his world unlike his real-world counterpart.

Deanna was a Guy in the Comic Books 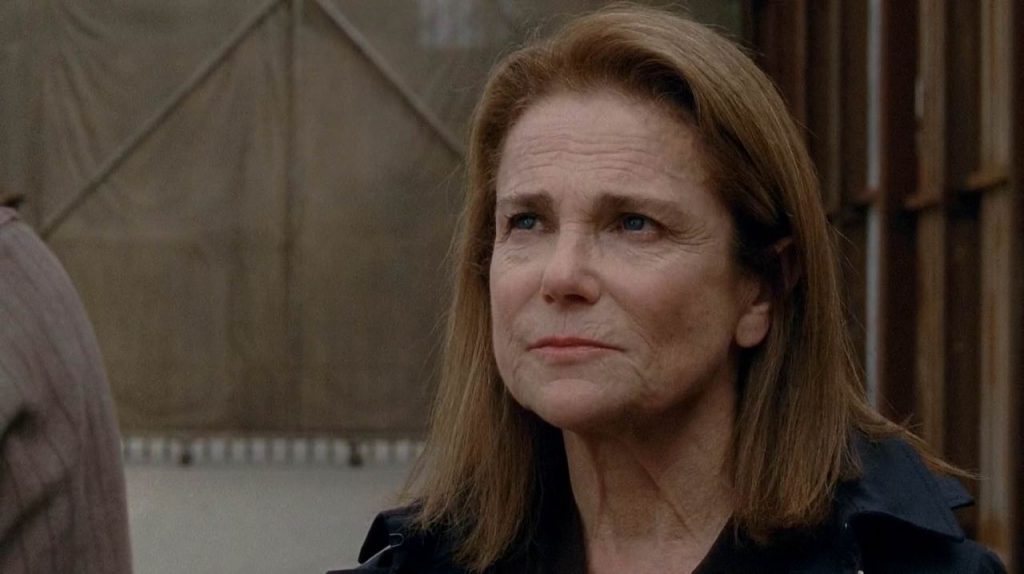 Appearing as the charming and optimistic leader of the people of the Alexandria Safe Zone, Deanna was one of the most pivotal characters of Season 5 and Season 6.

She died an honorable death at the end of her character’s lifespan. With no family left to look forward to, Deanna decided to let go and made the ultimate sacrifice.

She was a very well-respected woman in The Walking Dead Universe.

Let us stress the word ‘woman’ here because in the comic books, her appearance was starkly different. In Robert Kirkman’s The Walking Dead Comics, Deanna is a man.

He was a former politician hailing from Ohio and believe it or not, was kind of a pervert.

The Entire Series Has been Filmed Solely in Georgia 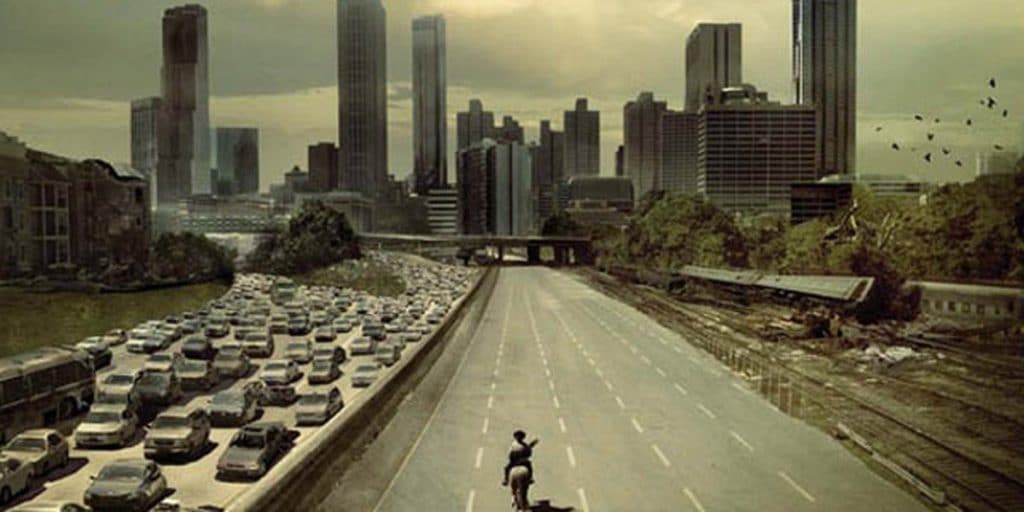 From the very start of TWD series, the shooting has happened within the confines of the Georgian State Boundary. The characters may call Metro D.C their home but truth be told, the actual locations have always revolved around the close vicinity of Atlanta.

In fact, all the scenes are shot within Georgia. You might think that remote locations set in far off places like Hershel’s Farm, the Sanctuary, Alexandria, or even Woodbury would have to have been shot outside Georgia.

You could not be more wrong. The decision to keep Georgia as the prime shooting location was taken by the crew that wanted to prove they can convince the world that the show takes them to many regions contrary to how they were actually shot. It also helped keep production costs down. 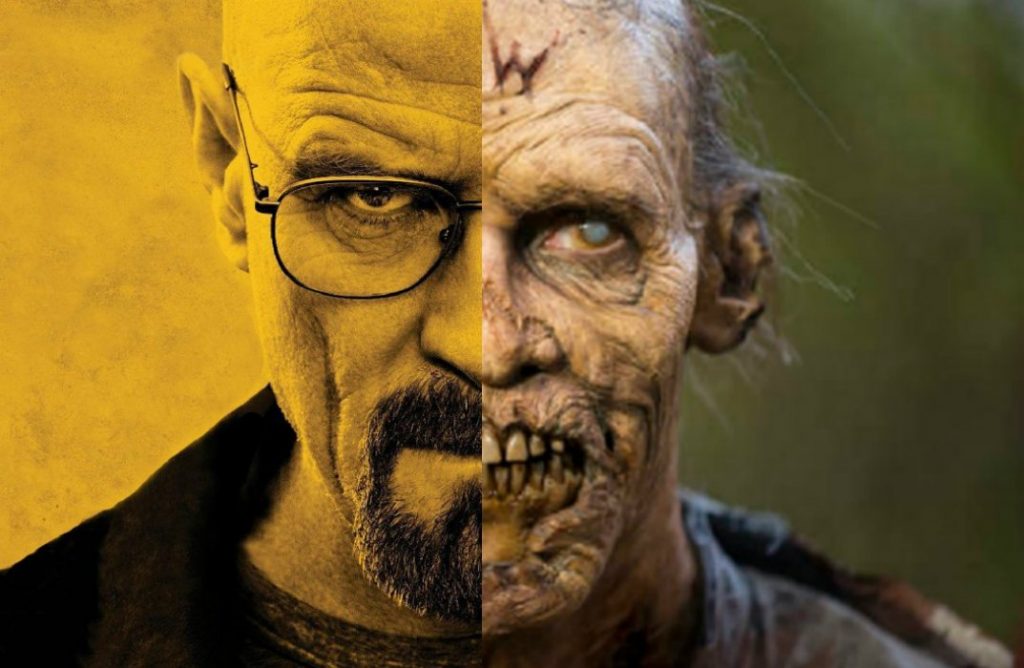 The Walking Dead is only one of the many hits under AMC’s belt. Breaking Bad is probably their crown jewel. So it was only natural that they would make subtle references to Breaking Bad in another of their hit series.

The Walking Dead’s Season 2 Episode “Bloodletting”, Merle’s Drug Stash is busted by Daryl when T-Dog develops a fever. The drug stash in question looks an awful lot like the blue crystals Mr Heisenberg made in Breaking Bad.

In Season 1, Glenn’s joyride Dodge Charger looks very similar to Heisenberg’s car, which he bought as an impulse buy.

You May Also Like: Birds of Prey’s Jurnee Smollett Wants to do Black Canary TV Series 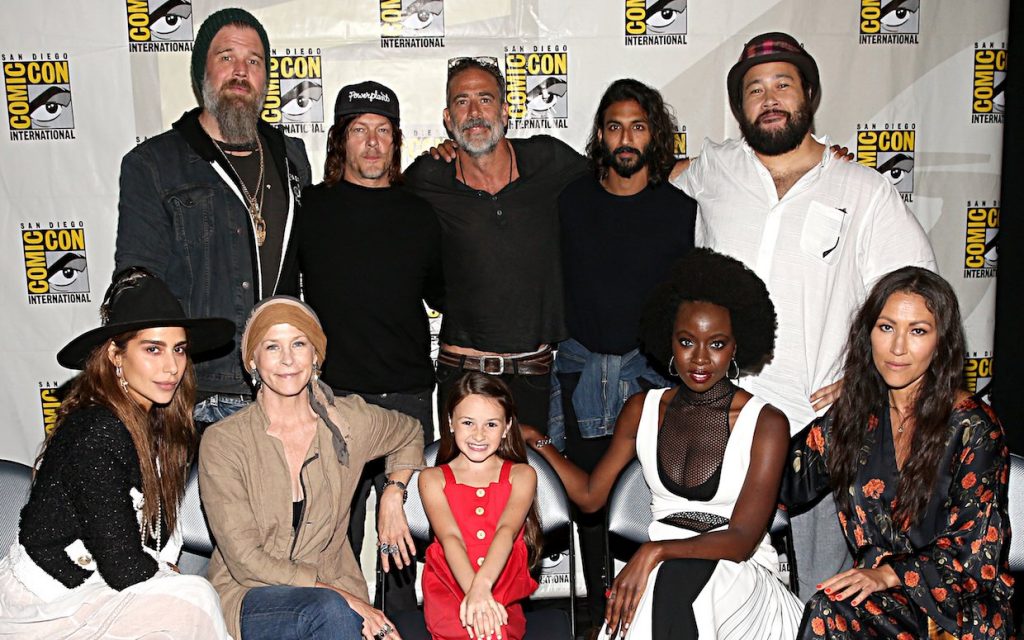 The Walking Dead is one of the few shows that never flinches when it comes to killing off major and fan-favorite characters. It is one of their specialties.

As a result, the cast has developed a tradition where all the characters come for a get-together potluck dinner before any character is about to leave. Sarah Wayne Callies, who played Lori Grimes in the series, revealed this odd and eerie tradition.

As the show gained massive popularity, they decided to call it birthday parties so that the crew and staff of the show do not catch wind of any spoilers.

Rick Grimes Has Been Wearing the Same Underwear Throughout 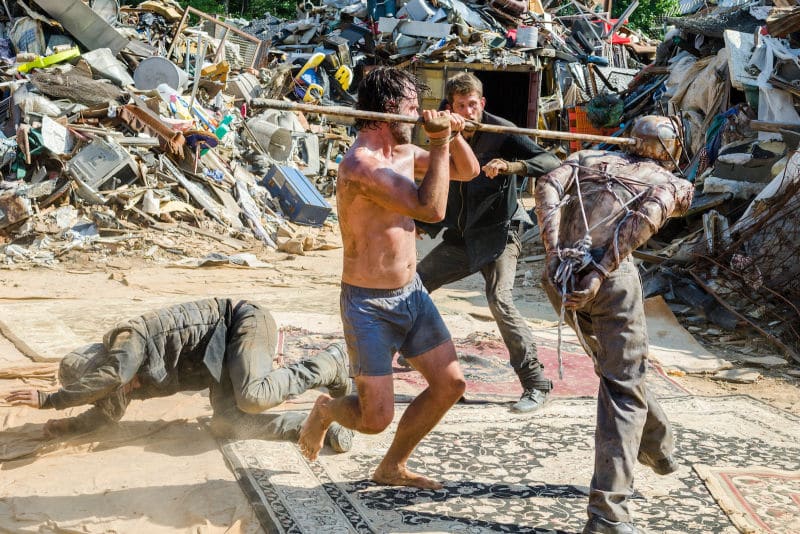 Before you get grossed out, it is not like Andrew Lincoln is wearing the same underwear in real life. We are talking about the character here.

In a world that is overrun by zombies, society has come to a standstill. Supplies run low and the last thing you would wish for is a fresh pair of undies.

So the characters of the show, even the lead ones, have to make do with whatever they got. Sheriff Rick Grimes has the same Black Levi’s he wore in the first season even today.

Till the time of his death, he rocked the same underwear. Do you remember the blue underwear Grimes was wearing when he got out of his coma?

Grimes has that too as a back-up. Rick Grimes has a total of two under-wears. For around three years or so (the official timeline until Rick Grimes’ death), he had to make do with just the two. Talk about gross!!! 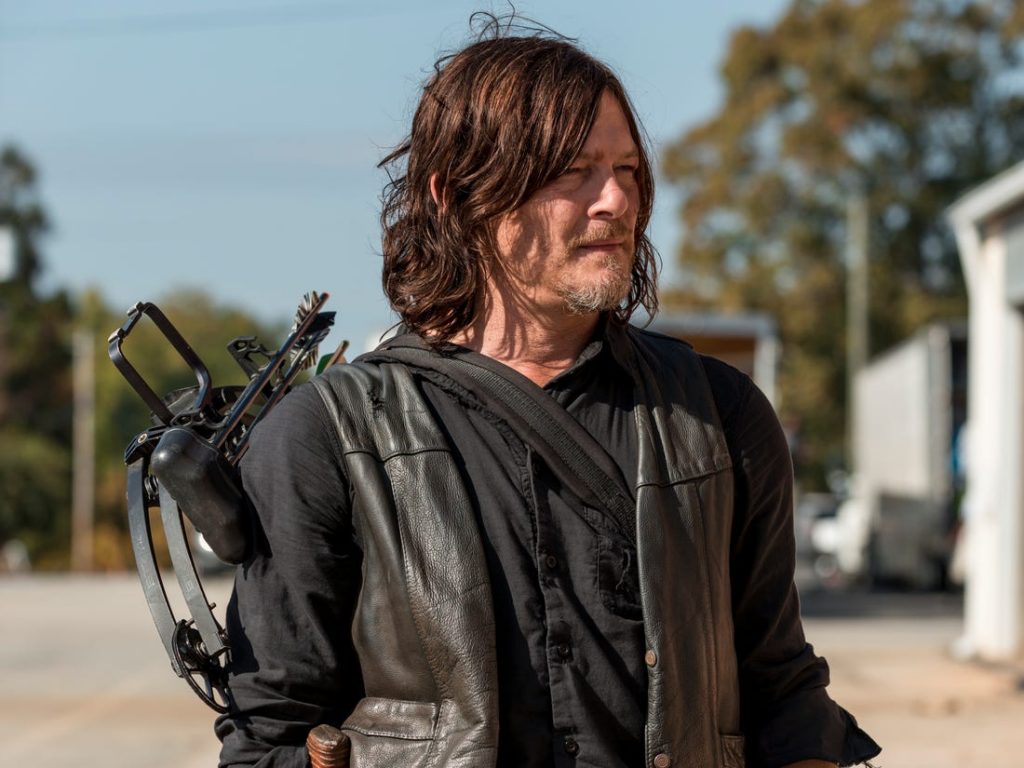 No matter which show we are talking about, if it is popular then it will surely have some obsessed crazy jar heads.

One such fan made his way to a convention center where Norman Reedus, who played Daryl in the show, was attending to a TWD promotional panel.

The fan came forth and literally bit Norma Reedus in the chest. Reedus was sportive enough not to press charges. The rabid man was kicked out for his over zealousness and trying to invade a celebrity’s private space.

The man is now banned from ever taking part in the convention. He is not even allowed to get near any TWD cast member.

There is a Zombie School for the Zombie Actors 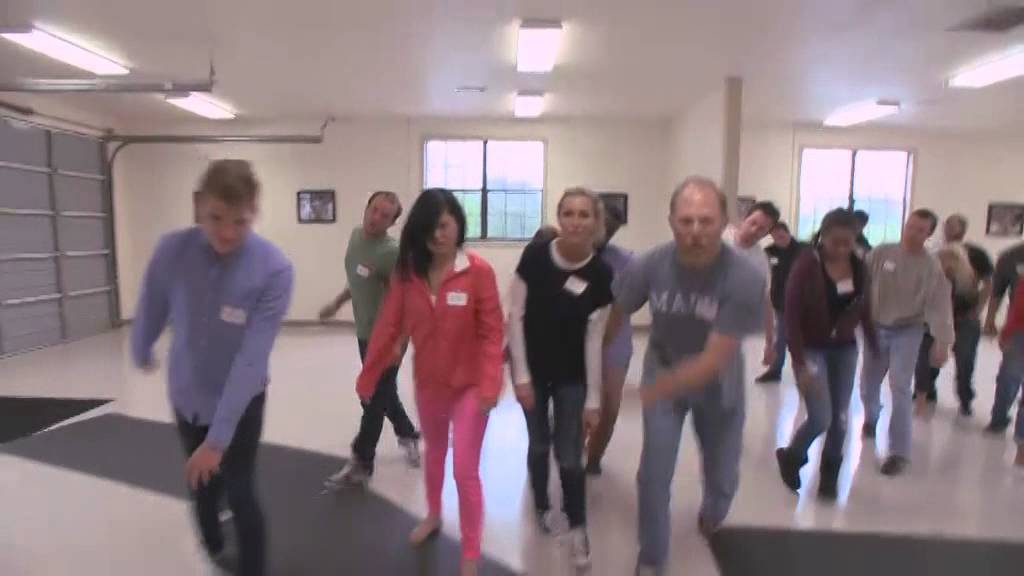 Not just anyone can make it to the Zombie Actors list. So if you thought you could easily portray the role of a brain-dead mindless flesh eater, we are sorry to burst your bubble.

Actors who intend to become cast members will have to attend a special session duped the Zombie School. There they will be trained by professionals in the business in the art of nailing the Zombie walk.

Horror Effects Expert and Executive Producer Greg Nicotero would then personally hand-pick the people he believes would make for a good zombie.

There are people who actually get rejected for not being able to act more like a zombie. And the best part, maybe we are one of them too. The world is just a sad, sad place if you ask us.