For those unaware , The Avatar : the last Airbender was originated in the hands of Michael DiMartino and Bryan Konietzko for Nickelodeon in 2005 . it is a complex story with diverse stars earned set in a world where  people can manipulate the elements of Earth, Water, Fire, and Air . it was all peaceful calm until one of the region started a war . 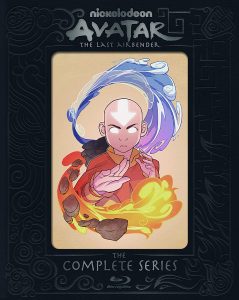 AVATAR id the iconic character that has the ability to manipulate all four elements and is the only one who prevents an upcoming war but then there comes a twist when the AVATAR disappears . but 100 years later, a new Avatar named Aang awakens and embarks on a journey to master all the elements in order to bring peace to the land once more followed by  the next Avatar, a young girl named Korra from the Southern Water Tribe.

The avatar series is the best animated series to have ever come into existence and now Nickelodeon is marking the milestone with special Blu-ray release set out for super -fans, and they really went all out with the aesthetics and art .

On its 15th anniversary , The Avatar : the last Airbender  is providing  Limited Edition SteelBook Collection which includes three SteelBook designs by artist Caleb Thomas highlighting Aang’s Water, Earth, and Fire skills along with korra and toph reperented at the back of the cases and also it comes in a slipcase including a ton of special features

The amazing anime and artwork has created a loyal fanbase hence the series are Currrently available to pre-order at best buy and amazon for $79.99 (18% off) which is fantabulous given its fame . hence one should definitely look into it before its all sold out .