The remarkable voyage of Captain America’s Shield across Marvel Studios’ four phases is detailed in a Marvel Cinematic Universe timeline. The MCU has created its fair share of iconic artefacts over the course of 26 films and five television episodes on Disney+ (so far). This includes, but is not limited to, Iron Man’s arc reactor, Thor’s hammer, and, of course, Captain America’s red, white, and blue shield, which has undergone design and significance changes throughout the years. Since becoming a superhero in the 1940s, when Howard Stark handed him his Vibranium shield during World War II, in Captain America: The First Avenger, Steve Rogers’ version of the character has held his iconic weapon. After spending decades frozen in ice, Steve would continue to use it from The Avengers through Captain America: Civil War, when he abandoned it following his feud with Iron Man. Seven years later, Tony gave Steve his restored shield just before the “Time Heist” in Avengers: Endgame, and while it was destroyed by Thanos, an aged Rogers presented a brand-new shield to Sam Wilson at the film’s conclusion.

Marvel UK has released a multi-part graphic summarizing all of the main events in Cap’s convoluted history:

Marvel UK has shared a multi-part graphic summarizing all the main occasions in the intricate history of Cap’s shield, honouring the legendary history of Cap’s crucial gear. The history starts with its development in The First Avenger and follows its conflicts, users, and changes all the way up to The Falcon and the Winter Soldier. The caption of the post is a spin on Steve and Sam’s discussion in Endgame: “‘How does it feel?'” It’s as though it’s gone on a long journey. ” Check out the original post by clicking here: https://www.instagram.com/p/CWxt9yeoyYH/ 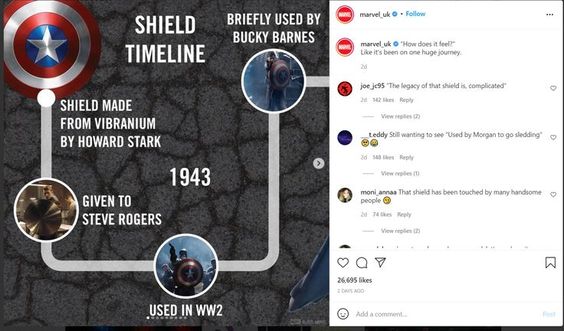 Evans’ time in the MCU appears to be ending, but Captain America isn’t departing with him:

Evans’ days in the MCU appear to be coming to an end in the aftermath of Endgame, but Captain America isn’t departing with him. The Falcon and the Winter Soldier centred on Sam’s battle to take on Steve’s mantle. At first, Sam believed that there could only be one cap, so he surrendered the shield to the Smithsonian, prompting the government to give it to John Walker. Following John’s transgressions with the shield, Sam and Bucky Barnes were compelled to reclaim it. Sam is now officially the MCU’s Captain. It was formally stated earlier this year that Mackie would return as the main character in Captain America 4, although with Phase 4’s slate apparently filled, it may be a bit before spectators see it. Malcolm Spellman and Dalan Musson, who created The Falcon and the Winter Soldier, are said to be penning the script for Captain America 4. The film’s narrative details are being kept under wraps, although it will most likely continue plot strands begun in the Disney+ series. However, with the MCU’s Phase Four schedule being so full, it may be a month before fans see the shield again.