Everyone is obsessed with Baby Yoda from the Star Wars: The Mandalorian on the new Disney+ streaming service. We know why the people who watch the Lucasfilm series love the mysterious creature; it’s adorable and sweet and will Force choke you if you hurt its poppa. But why are people within the Star Wars galaxy obsessed with Baby Yoda? Is it because of its abilities with the Force, or is it because Baby Yoda could be the key to reviving a powerful species?

Why is Imperial warlord Moff Gideon so hellbent on obtaining Baby Yoda? 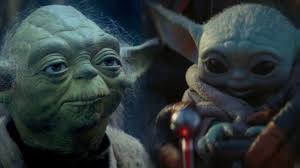 “I know … Like any great leader or scientist — clue, clue, clue — with someone who is advanced in a certain way, yeah, you could want to be their best friend, or you could want to co-opt what is inside them to figure out how to make all of us a little better at humanity,” Esposito explained. “So it’s that power and control of a Moff leader who is trying to put the universe back together. But, how does he know everything? How does he know everything that’s going on? He’s a very interesting character and I’m so honored to be a part of this production.”

It sounds like Moff Gideon is still committed to the ideals of the Empire despite its presence being nearly wiped out across the galaxy. While some forces retreat to the Unknown Regions in order to rebuild as the First Order, Moff Gideon seems determined to reestablish order across the Outer Rim and other systems.

Moff Gideon likely knows a lot about the Child, as he knew many secret details of the characters Greef Karga, Cara Dune, and Din Djarin AKA the Mandalorian.

“It’s been exciting to be a part of that project because of the iconic nature of it, but even more so, because it has returned me to the Star Wars that I loved,” he said. “I saw the first few movies and dropped away because it became more and more in a different vein than what I wanted to be in, but this is the true space western. It gives you room and space and each one is a little bit of a film. So you’re able to tell a story visually and it returns to the original guts of mythology based deeply rooted in Joe Campbell’s mythology which George Lucas was so fond of and which is why he was inclusive of that mythology in Star Wars so I’m pleased to be a part of that.”

Star Wars: The Mandalorian is expected to return for Season 2 on Disney+ at the end of the year.