The color of Yoda’s Lightsaber reflects its stance in the Force, and Grogu’s yellow blade is nothing different in The Mandalorian season 3. 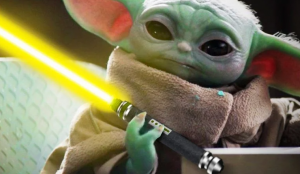 The final episode of The Mandalorian season 2 showed the season completion of Din Djarin’s long quest. Djarin finally returned Grogu to a Jedi when Luke Skywalker appeared on Moff Gifeon’s ship. It depicts that together, Grogu and Luke will train the Force as Luke to rebuild the Jedi Order. However, unlike Yoda or Luke, Baby Yoda’s lightsaber is yellow.

Trends International has recently released a new poster of The Mandalorian that entitles “Size Matters Not.” As a part of the [email protected] 2021, it shows Luke Skywalker and Grogu as the new Padawan. While Grogu is flaunting different lightsaber parts, Luke is found to be in his Jedi robes reflecting a yellow Kyber crystal.

After the season finale, it was found that Din Djarin now has new problems to solve around Darksaber and Bo-Katan. Since The Mandalorian is created around what Djarin does, some audiences have pre-assumed that Luke and Grogu will not be there in The Mandalorian season 3. However, with the poster’s release, it is pretty evident that fans won’t really have to wait for long to see what Skywalker is up to. Even if they don’t appear in The Mandalorian season 3, they will be addressed to some extent.

The poster clearly echoes a reflection on Grogu’s lightsaber. It shows that it would be yellow in color while training with Luke. Stereotypically, most of the lightsabers in Star Wars were either green or blue or red in color. Still, this one would not be the first time a Jedi will use a yellow lightsaber. Other Jedi who has used a yellow blade include Luke, the temple guards, and Rey in The Rise of Skywalker. While it is not unusual for a Jedi to use a yellow lightsaber, it could depict something about the character. 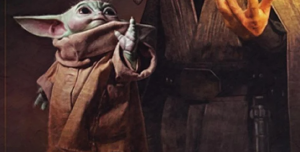 Lightsaber in Star Wars is powered by Kyber crystals where each Jedi bonds with a crystal to induce their Force into it. That is how each of them reflects a different color. Each color means something and helps the user to communicate stance in the Force. In Disney’s canon, the yellow lightsaber is associated with Jedi Sentinel, a class of Jedi. As per Star Wars: Knights of the Old Republic, this class of Jedi usually seeks to “strike a balance between the physical and mental disciplines of the Jedi Order.”

The yellow lightsaber has also been a part of the Grey Jedi in Star Wars Legends. This type of Jedi is someone who tends to balance the dark and light sides of the Force. While the franchise has not used this concept for long, it is possible that this could still show up as a viable option and get re-canonized. Additionally, it would make a lot more sense if it re-begins with Grogu. This is because of his intriguing past, where he has seen and felt darkness. In this context, it is quite possible that the franchise re-launches the Grey Jedi through Grogu, and the yellow lightsaber is just another representation of it.

The Mandalorian season 3 is yet to get a premiere date.