It’s safe to say that Rainn Wilson’s Dwight Schrute carries the weight of the show in the later seasons. But we don’t give him enough credit for earlier seasons of “The Office.” From farm mishaps, petty arguments and absurd attempts to get back at Jim, Dwight has never failed to add a touch of much-needed humour when the show called for it.

Here’s a list of the funniest phone calls, Dwight made as Assistant (TO THE) Regional Manager, at Dunder Mifflin Scranton.

10.”So, Sounds Like You’re Too Sick To Go Into Work But You’re Well Enough To Go To The Pharmacy.” 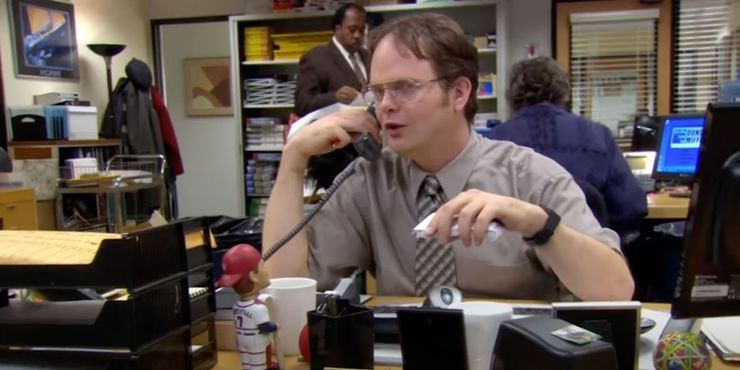 It’s typical of Michael to assume someone called in sick to skip work. And Dwight follows Michael’s lead. So when Oscar calls in sick, the duo is on his tracks, determined to catch him red-handed. In a phone call, Dwight even questions Oscar on his ability to go to the pharmacy but not to work. Even though Oscar is at fault, you can’t help but laugh at the ridiculousness of his question. 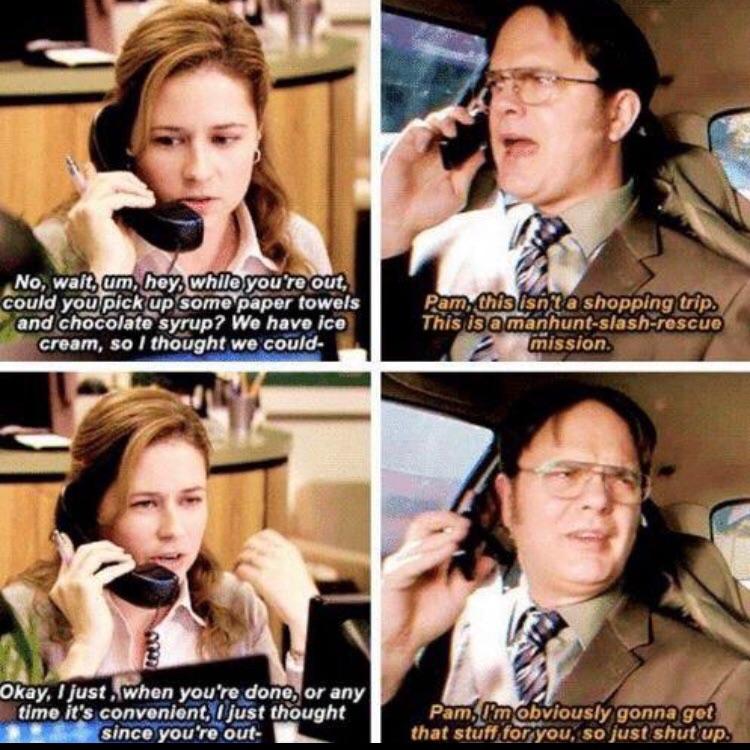 Pam and Dwight share one of the most adorable friendships on the show. We see a glimpse of this in “The Search” from season 7.

Michael is lost in Scranton without his phone or wallet. Dwight, Erin and Holly team up to look for him. While on their “manhunt”, Dwight calls Pam to check in case Michael has returned but he hadn’t. Before he hangs up, Pam asks Dwight to if he could get ice cream, paper towels and chocolate sauce. Being Dwight, he lashes out Pam for interpreting his manhunt-slash-rescue mission with a shopping list. And then tells her he’ll get what she needs. 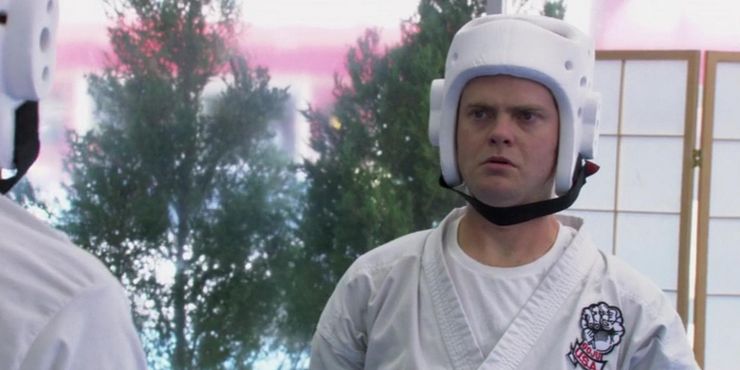 Dwight has a question to ask his martial instructor. Instead of a regular greeting, Dwight goes for a dramatic, “Sensai, Hello, It’s Senpai.”

Honestly, one of the golden Dwight moments of the show.

7. “And You Make Sure To Get Down There And Check Out The Harry Potter World!” 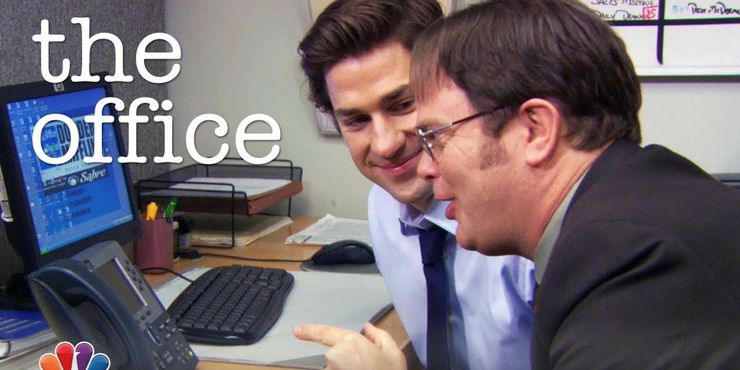 When Todd Packer walks in to look for a desk job at the Scranton branch, Michael is over the moon. The rest of the office, however, isn’t. Dwight and Jim decide to take matters into their own hands.

They prank call him, pretending to offer him a job at corporate in Florida. Packer falls for it and leaves Scranton for his wonderful fake job at Florida. 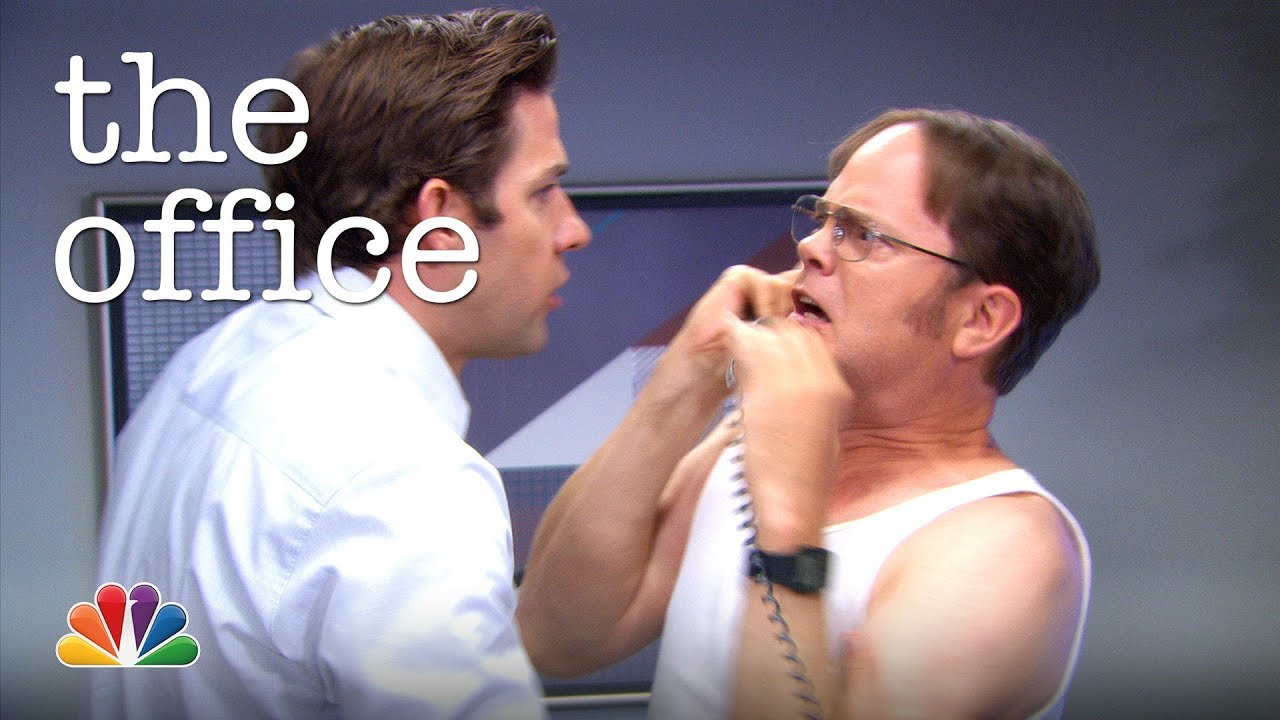 When Iris Black cancels the interview Dwight is supposed to take on local business issues, the office decides to not tell him. Nellie changes her accent and aks Dwight a series of questions the somehow end up with Dwight half-dressed and under the impression that he just saved the company.

5. “Please, You Must Do One Thing: Kill Mose Before He Kills You.” 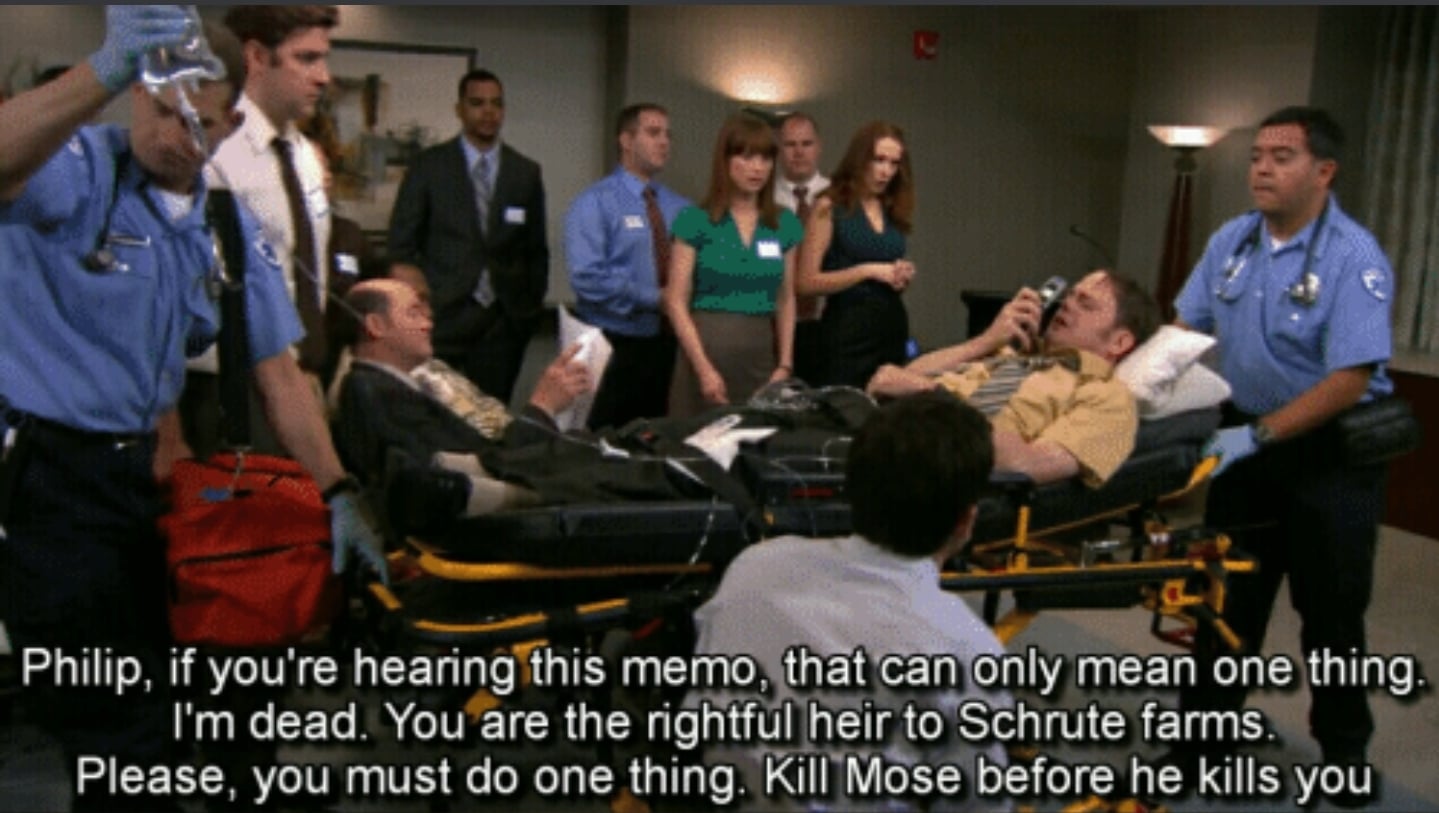 On Dwight’s business trip to Tallahassee, he goes above and beyond to prove himself as the ideal choice for the position of Vice President. Unfortunately, he starts experiencing excruciating stomach aches and eventually collapses during the presentation. The paramedic team arrives and confirms Ryan’s suspicions of appendicitis.

Anticipating his death, he leaves a voice memo to his son born from wedlock, with instructions to acquiring Schrute farms.

4. “This Man Is An Imposter! Don’t Do Business With Him!” 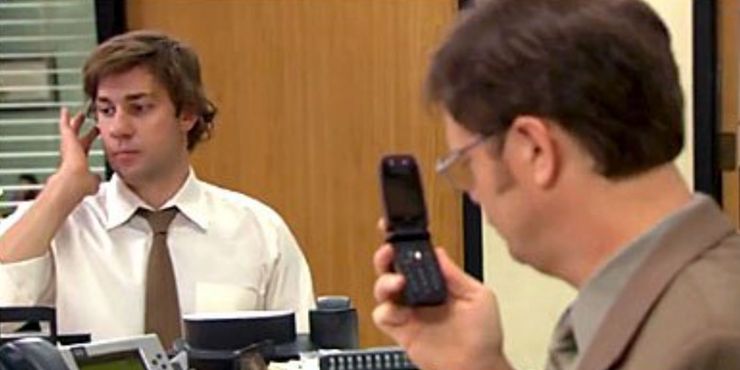 The Office is really a show most about going the extra mile to prank Dwight. An excellent example would be when he changed the setting on Dwight’s phone, connecting it with his own, to receive his calls.

So when Dwight receives a call from a client, Jim takes the call instead. Dwight is seen yelling into the headset, and I don’t blame him. It is his job after all.

3. “Our Prices Have Never Been Lower!” 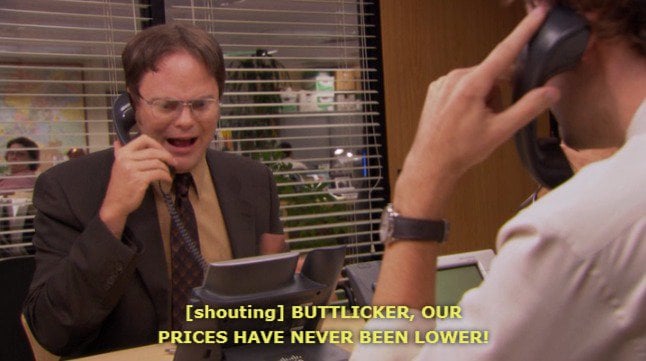 In Season 5, we see Jim and Dwight undergo special sales call training. Michael has them roleplay, with Jim as the customer.

Jim goes with his usual strategy of instigating Dwight to get a laugh. He calls himself William Buttlicker, playing the role of an elderly man with hearing issues. The call escalates and Dwight loses his fake sale, and Micahel has to step in. 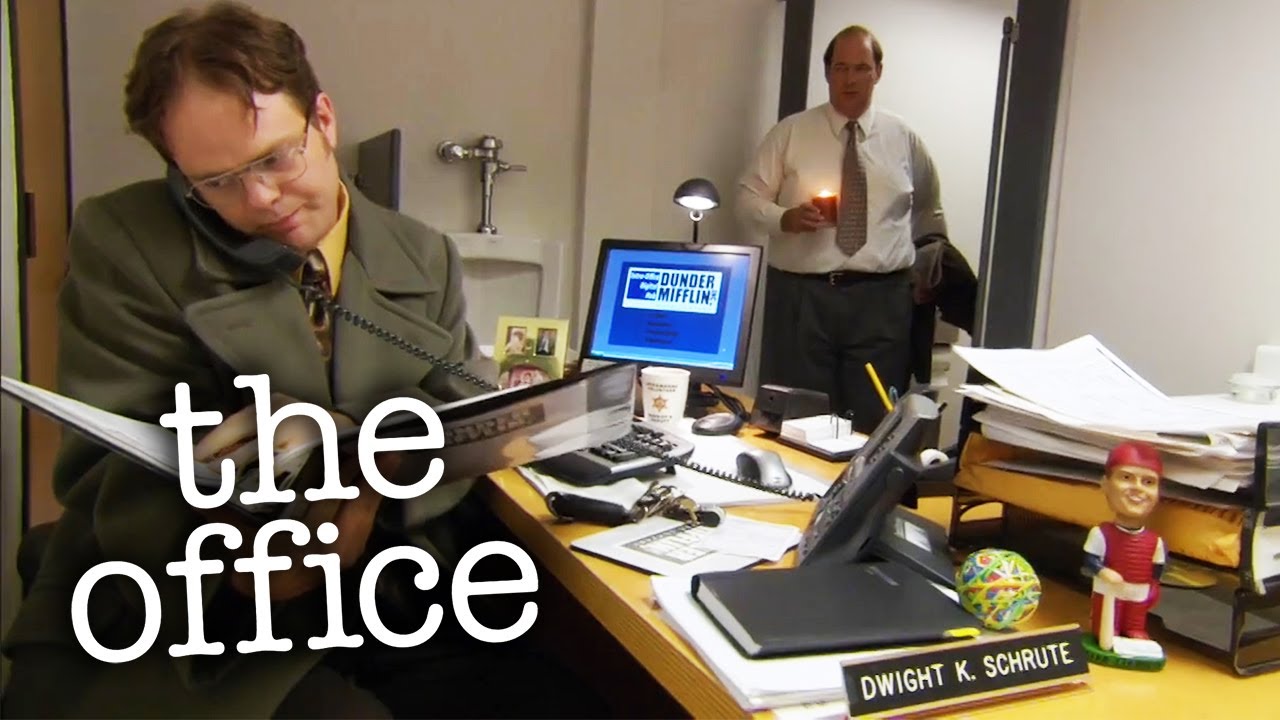 Jim’s most iconic prank so far has to be the toilet washroom. When Dwight walks into the office, he finds his desk missing. A game of Hot and Cold takes him to the washroom, where he finds his desk perfectly set up.

As soon as he walks in, the phone rings. Dwight answers and annoyedly tells Jim what he wants to know as if forgetting the entire incident. 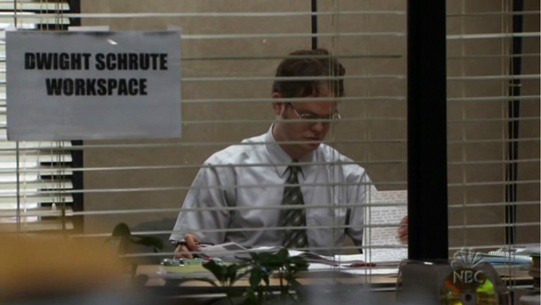 Micahel chickens out from choosing the new healthcare plan, so he leaves the office, with Dwight in charge. Dwight outdoes himself with executing the task and goes as far as to ask everybody in the office inappropriate questions regarding their health conditions. Jim and Pam decide to have a little fun with Dwight but they end up getting the better of him. An irate Dwight calls corporate and asks Jan permission to fire Jim. Unfortunately for him, it was no.