Classic Loki, a Loki variant played by Richard E. Grant, sacrifices himself for God of Mischief and Sylvie in Marvel’s Loki episode 5. There is a reason why he lefts the screen with a manic laugh when meeting his demise. 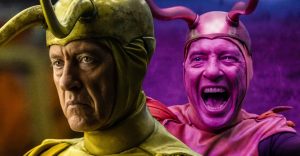 When Classic Loki sacrifices himself for Loki and Sylvie in Loki’s episode 5, the viewers can see a manic laugh on his face. In this episode of Marvel and Disney Plus’s series Loki, God of Mischief, played by Tom Hiddleston, discovers a strange void where TVA (Time Variance Authority) prunes the variants. Once Loki gets pruned by Ravonna Renslayer, he lands the void where he gets welcomed by three other variants, Kid Loki, Alligator Loki, and Classic Loki. As soon as Sylvie reaches the void, she makes the God of Mischief believe that the real villain who controls TVA might be there – behind the void. As a result, they unite to discover the villain hiding behind the Alioth, a monster in the void.

The monster is nearly unbeatable, and it is perhaps a cloud-shaped beast that consumes matter and energy. It could also be framed as a disposal bin for TVA that eats every pruned people and object. The God of Mischief planned to kill the monster, but it was clearly unbeatable. However, when Sylvie manages to touch Alioth, she discovers that it could be enchanted. She conveys to Loki that if she could somehow take control of its mind, they can unlock the mystery of that void.

The plan seemed to be working, and it gets partly revealed that Alioth is hiding a mysterious citadel. But, the plan could have failed if Classic Loki would not have made an unexpected move. After leaving Sylvie and God of Mischief to fend for themselves, Richard E. Grant returns to distract the cloud monster. To help Sylvie and Loki enchant Alioth, Classic Loki conjures a fake Asgard. The unexpected plan works, but Alioth finds Classic Loki and devours him. Right before his demise, Classic Loki laughs and yells, “Glorious Purpose!” While he knew he was about to die, the event was rooted in Classic Loki’s journey. 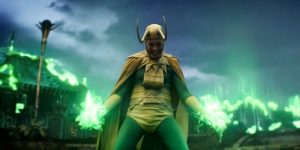 Classic Loki realized that misery followed him everywhere after he ran away from his timeline. During episode 5, even other variants were attacking his Nexus event. That is why he mentioned earlier that “We are broken, every version of us.” But, he proved that he was not as selfish as other variants by sacrificing his life for a good purpose. During his demise, he had a manic laugh on his face because of the absurdity and the fact that he gave up his life to help others.

This event proved that Classic Loki is different from all the other variants and especially God of Mischief. The character played by Richard E. Grant is an extraordinary villain who wants to spread mayhem. Concerning this aspect of Classic Loki’s life, he clearly suits best with a maniacal laugh. By sacrificing his life for a good purpose, he shredded his past and the villain he used to be.