The Batman proposed Catwoman a year ago but that’s not how it all started in the Batman comics by Tom King. The #50 issue of Batman reveals that Batman’s relationship with Catwoman was just a part of the story and not the story itself.

Okay, so for those who don’t know this, Batman and Catwoman didn’t get married (Spoiler alert) and this Batman focuses on Bruce Wayne stuck in a trance where he thinks if he could be happy and Batman both at the same time? His proposal to Catwoman was a part of this thought until Catwoman realises that she cannot be the reason Bruce stops being Batman and ends up sacrificing their marriage. 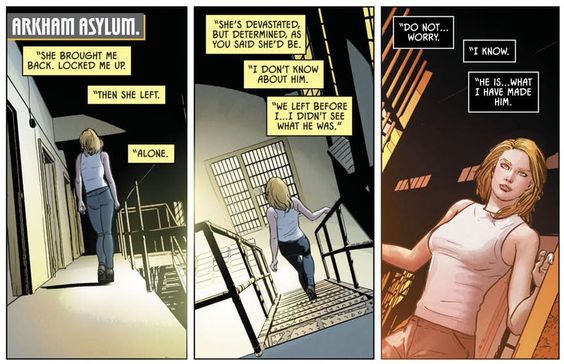 What Catwoman doesn’t know is that whatever has happened in the past 50 issues has been because of the manipulation by Bane.
The final page of issue #50 shows Holly Robinson returning to Arkham and telling Bane that everything happened according to the plan and they have finally managed to break the Bat. So it seems like Bane was the one behind setting it all up for Batman and now Batman is exactly where Bane wanted him to be; vulnerable, broken and alone. Bane hasn’t been working alone but is helped by the Cabal of characters including Holly Robinson, The Riddler, Joker, Gotham Girl, Hugo Strange, Scarface, Thomas Wayne aka Flashpoint Batman and a few others. Each had their own role to play in bringing Batman down while Batman is still unaware of the situation. 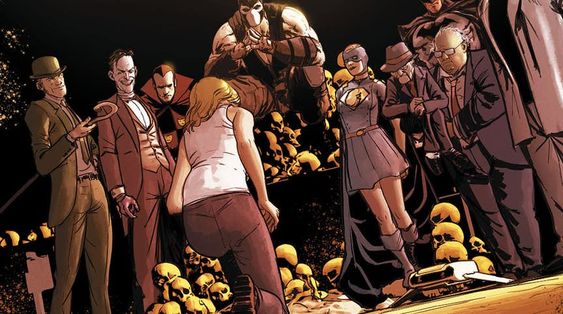 Tom King’s Batman started with the introduction of Gotham Girl and Gotham, two new heroes with Superman level powers but no sense of using those powers. Batman tried to mentor them but they are too broken by the manipulation caused by Hugo Strange. Gotham dies fighting Batman and this leads Batman to resolve saving her life.
To save her life, he needed the Pyscho Pirate’s emotion altering Medusa’s mask but the Pirate was Bane’s prisoner at the time.
Then we see Batman assembling his own Squad with Catwoman, who was in the prison for killing over two hundred people and Arnold Wesker. Together, they managed to escape with Psycho Pirate and this angered Bane and he travelled to Gotham to regain him back. Meanwhile, Batman learns that Holly Robinson is responsible for the deaths of the people for whom Catwoman was accused.

Batman clashes with Bane and gets rebuffed by him and travels to Flashpoint timeline to meet his father Thomas Wayne who urges Bruce to be happy which leads to his proposal to Catwoman.
Batman tells Selina about his darkest moment before she decides to marry him. Just before the marriage, Batman is shown how the world would’ve been without Batman by Booster Gold, which ends up traumatising the time traveling hero.

So now, we know about the plan and the characters involved to build up the storyline to this point but how much of it was Bane’s plan? Gotham Girl is still under the Hugo’s manipulation though Batman believes that she’s been cured. Was Bane behind The War of Jokes and Riddles earlier in the Batman’s life? The two biggest question marks however, are Skeets and Flashpoint Batman. Skeets could be there because he blames Batman for Booster Gold’s trauma but it might be possible that he has been working with Bane all this while and was behind putting in the idea of “The Gift” in Booster’s head and this might be possible as Skeets has been earlier revealed as a criminal mastermind before too.

However, Flashpoint Batman’s role seems the most confusing and it makes us wonder how did he get there, in the first place? It might be Thomas Wayne from a dead reality or someone with the same fashion. It’s possible that Bane knows about the Flashpoint Batman thanks to Psycho Pirate. 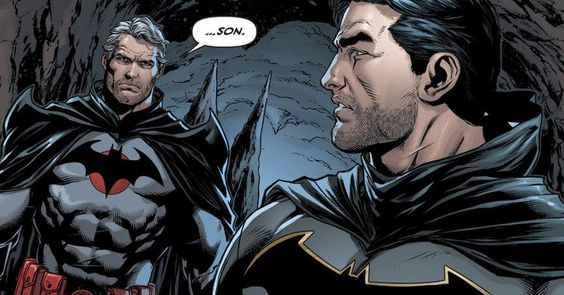 People and fans might be upset about the spoiled wedding but we’ve just reached the half point and with the revelation of Bane’s plan, this might become the biggest Batman storyline in the history of DC.