As per James Gunn, the writer and director of The Suicide Squad, Nathan Fillion’s TDK has an unseen and hidden ability that he never uses in the film. 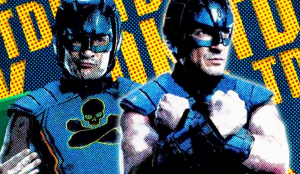 James Gunn revealed that Nathan Fillion’s The Detachable Kid has a hidden ability that he never used in The Suicide Squad.

The Detachable Kid can telepathically control his limbs after detaching. As per James Gunn, in The Suicide Squad, Fillion’s character’s legs are also detachable. Gunn said that “TDK is just a guy whose arms and legs come off. That’s his only power.” This revealed an ability that TDK never reflects on screen.

The Detachable Kid’s abilities could be explored when Task Force X gets pinned by enemy fire in the first part of The Suicide Squad. The scene takes place on the beach of Corto Maltese. At that very moment, Rick Flag (Joel Kinnaman), to provide a cover, dispatches Nathan Fillion’s The Detachable Kid. That is also the exact moment where the full name of TDK gets revealed as “The Detachable Kid”. TDK later, in a scene, detaches his arms just to slap around the enemy soldiers. It was perhaps the most useless abilities he could have shown against Savant (Michael Rooker) and Harley Quinn (Margot Robbie). But apparently, TDK could only detach his arms at that time and not his legs. This is before getting killed in the first few minutes of James Gunn’s The Suicide Squad.

In a film or say screen that is filled with supervillains, Nathan Fillion’s The Detachable Kid is one of those characters that is specifically designed and created for The Suicide Squad. Apart from him, Rarcatcher 2 is another character that is created specifically for the franchise. He can train and tame rats and also to control them. As far as the current version is concerned, TDK is an original character. However, the inspiration of Nathan Fillion’s The Detachable Kid is taken from DC Universe’s Arm-Fall-Off-Boy. This character first appeared in Curt Swan and Gerard Jones’s Secret Origins in 1989.

Nathan Fillion has described the process that went behind creating the character of TDK along with director and writer James Gunn. He said that “My participation in the invention of the character kind of went like this, James saying, ‘Here’s how it’s going to go.’ And me saying, ‘That sounds good.’ That’s what I call dissipation…I take a lot of credit. It’s all about the function of the character in the story. What is his function in the story? And TDK’s abilities, for me, clearly spelled out his function and I got it. I know exactly what you need. I know what you’re looking for. I know what you want. Boom. Let’s do this. I get it.”

Directed and written by James Gunn, The Suicide Squad is now available in theaters and is also streaming on HBO Max.