The Witcher- A Netflix Series

A small teaser was released by Netflix yesterday giving us the first look at Henry Cavill‘s Geralt of Rivia in the upcoming series The Witcher.

While many fans have been swooning over his appearance, some have been quick to criticise it. Some even went on to compare him with popular figures including Legolas from Lord of The Rings.

But there is one comparison which keeps on coming again and again. We are talking about Christopher Lambert’s portrayal of Raiden in Mortal Kombat. Check out the photo below: 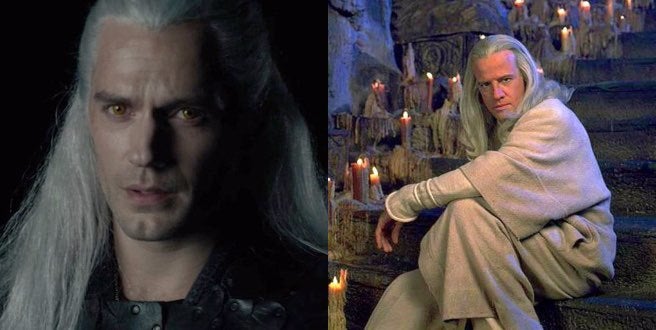 And this led to many fans taking to social media and voicing their view on the teaser, comparing the two actors.

Wait, that was Geralt?! I’m not nearly awake enough for any of this. I thought that was old test footage of Christopher Lambert as Lord Raiden in 1995’s Mortal Kombat.

I saw the small video of Henry Caville as Geralt and I thought it was a gif of Raiden from the mortal kombat movies…. Jeeze that wig is terrible

That first look at “Geralt” in Netflix’s The Witcher… I think he bought some Legolas Halloween outfit? Either that or a convincing 1995’s Mortal Kombat Raiden cosplay.

Henry Cavill as Geralt from @netflix series base on @witchergame it reminds me to #ChristopherLambert as Raiden from Mortal Kombat movie. What Has Been Seen Can’t Be Unseen. #HenryCavill #Superman #Series #Netflix #witchernetflix #Witcher #Raiden #Geralt #MortalKombat pic.twitter.com/HSCzjNa7f2